Transition of the Swiss Phosphorus System towards a Circular Economy—Part 1: Current State and Historical Developments
Next Article in Special Issue

“What Kind of a Science is Sustainability Science?” An Evidence-Based Reexamination

Sustainability science (SS), rooted in multiple disciplines, has been developing rapidly during the last two decades and become a well-recognized new field of study. However, the “identity” of SS remains unclear. Therefore, this study was intended to help synthesize the key characteristics of SS by revisiting the question raised by the leading sustainability scientist, Robert Kates (2011): “What kind of a science is sustainability science?” Specifically, we reviewed the literature in SS, and developed a synthesis of definitions and core research questions of SS, using multiple methods including change-point detection, word cloud visualization, and content and thematic analyses. Our study has produced several main findings: (1) the development of SS exhibited an S-shaped growth pattern, with an exponential growth phase through to 2012, and a asymptotic development phase afterwards; (2) ten key elements from the existing definitions of SS were identified, of which understanding “human–environment interactions” and “use-inspired” were most prominent; and (3) sixteen core questions in SS were derived from the literature. We further proposed an eight-theme framework of SS to help understand how the sixteen questions are related to each other. We argue that SS is coming of age, but more integrative and concerted efforts are still needed to further consolidate its identity by developing a coherent and rigorous scientific core. View Full-Text
Keywords: sustainability science; sustainable development; definition; core questions; thematic framework; sustainability education; landscape sustainability sustainability science; sustainable development; definition; core questions; thematic framework; sustainability education; landscape sustainability
►▼ Show Figures 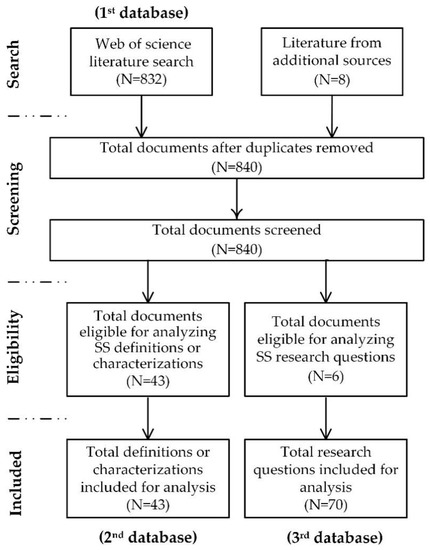