“What Kind of a Science is Sustainability Science?” An Evidence-Based Reexamination
Previous Article in Journal

Disentangling the Complex Effects of Socioeconomic, Climatic, and Urban Form Factors on Air Pollution: A Case Study of China

Ordos became the new “coal capital” of China within a few decades since the country’s economic reform in 1978, as large-scale surface coal mining dramatically propelled its per capita GDP from being one of the lowest to one of the highest in China, exceeding Hong Kong in 2009. Surface coal-mining areas (SCMAs) have continued to expand in this region during recent decades, resulting in serious environmental and socioeconomic consequences. To understand these impacts and promote regional sustainability, quantifying the spatiotemporal patterns of SCMAs is urgently needed. Thus, the main objectives of this study were to quantify the spatiotemporal patterns of SCMAs in the Ordos region from 1990 to 2015, and to examine some of the major environmental and socioeconomic impacts in the study region. We extracted the SCMAs using remote-sensing data, and then quantified their spatiotemporal patterns using landscape metrics. The loss of natural habitat and several socioeconomic indicators were examined in relation to surface coal mining. Our results show that the area of SCMAs increased from 7.12 km2 to 355.95 km2, an increase of nearly 49 times from 1990 to 2015 in the Ordos region. The number of SCMAs in this region increased from 82 to 651, a nearly seven-fold increase. In particular, Zhungeer banner (an administrative division), Yijinhuoluo banner, Dongsheng District and Dalate banner in the north-eastern part of the Ordos region had higher growth rates of SCMAs. The income gap between urban and rural residents increased along with the growth in SCMAs, undermining social equity in the Ordos region. Moreover, the rapid increase in SCMAs resulted in natural habitat loss (including grasslands, forests, and deserts) across this region. Thus, we suggest that regional sustainability in Ordos needs to emphasize effective measures to curb large-scale surface coal mining in order to reduce the urban–rural income gap, and to restore degraded natural ecosystems. View Full-Text
Keywords: surface coal-mining area; spatiotemporal patterns; environmental sustainability; socioeconomic conditions; Ordos surface coal-mining area; spatiotemporal patterns; environmental sustainability; socioeconomic conditions; Ordos
►▼ Show Figures 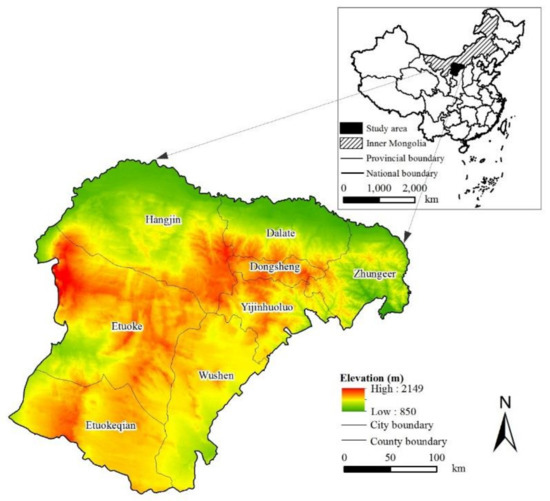