Development of Parkinsonism in a Patient with Central Pontine Myelinolysis

Parkinson’s disease (PD) is a chronic, progressive neurological disorder, the prominent symptoms of which are motor symptoms consisting of resting tremor, akinesia, postural reflex disturbance, and rigidity. As these symptoms impair patients’ motor functions [1], falls [2,3] and the freezing of the gait [3] occur frequently, reducing patients’ QOL to a noticeable degree. Historically, the Hoehn and Yahr scale has been used to rate the severity of motor symptoms in PD patients [4]. Subsequently, the Unified Parkinson’s Disease Rating Scale (UPDRS) was developed as a comprehensive evaluation index for various aspects of PD, including motor impairment and non-motor symptoms [5]. The recently revised version, known as the Movement Disorder Society UPDRS (MDS-UPDRS) [6], is widely used. While the MDS-UPDRS is widely used as a validated evaluation index, it may not detect small symptomatic changes, particularly those in motor symptoms, even when said changes are clear from gross observation, since it uses discontinuous numbers to rate PD symptoms in a stepwise manner. Therefore, the development of a scale with which to evaluate motor symptoms quantitatively with continuous variables is in high demand for use not only in clinical practice but also in drug development.
As a result of recent, rapid progress being made in the development of various digital motion-analysis devices, an increasing number of reports have accumulated, describing the utilization of such devices for quantitative motion analysis in PD patients [7]. In particular, since three-dimensional analysis is essential for the accurate evaluation of motor symptoms in PD patients, the analysis systems for such a purpose require multiple cameras and sensors or markers which must be attached to patients during data acquisition. Such requirements represent major obstacles to the introduction of the systems in clinical settings [7]. AKIRA® (https://www.systemfriend.co.jp/en/service/akira accessed on 10 June 2022) combines video and infrared sensors for the quantitative, three-dimensional evaluation of body movements; with a single camera and no markers attached to the patient’s body, the system videorecords body movements, automatically recognizes major joint points in the whole body, and records the real-time locations of these points as absolute coordinate values in the horizontal (X-axis), vertical (Y-axis), and anteroposterior (Z-axis) directions with the camera as the origin [8,9].
The observation of body motion is critical for the evaluation of PD, as bradykinesia is an essential finding in the Movement Disorder Society Clinical Diagnostic Criteria for Parkinson’s disease [10]. Another characteristic of PD is postural abnormalities, such as a chin-on-chest or head-forward posture and Pisa syndrome. PD specialists routinely make their ratings of the severity of patients’ conditions based on body movements and the level of postural abnormalities demonstrated while the patient enters the examination room; however, no quantitative, easy-to-use evaluation methods have been established for body movements and postural abnormalities. Therefore, in this study, we conducted three-dimensional gait and motion analysis using AKIRA® in PD patients to measure the tilt angles of the neck and trunk during walking, and we compared these parameters with the MDS-UPDRS to evaluate their usefulness as measures by which to rate the severity of PD.

This was a prospective, observational study of PD patients. Patients with PD who visited the St. Marianna University Hospital between September 2020 and March 2022 and who met the following inclusion criteria were included in this study. Inclusion criteria were: (1) patients with a definitive diagnosis of PD based on the Movement Disorder Society Clinical Diagnostic Criteria for Parkinson’s disease [10]; (2) patients aged ≥20 years and ≤80 years; (3) patients who had had no changes in medication within 1 week of evaluation; (4) for patients experiencing the wearing-off phenomenon, the “on” status should have been confirmed during evaluation; (5) patients who were capable of understanding instructions; (6) a Hoehn and Yahr rating of II–IV; (7) patients without psychological symptoms interfering with daily life, such as severe hallucinations; and (8) patients capable of maintaining a standing posture. Exclusion criteria were: (1) patients with PD-related diseases other than PD; (2) patients with severely limited passive range of motion; (3) patients who had experienced a rapid exacerbation of PD symptoms within 1 week; and (4) patients who had developed complications interfering with motor functions within 1 month, such as fractures. Patients with an observation duration of 1 year after enrollment underwent the analysis at the time of enrollment and 1 year after enrollment, and they had no restrictions on their treatment details during the period. This study was conducted with approval from the clinical study committee of the St. Marianna University School of Medicine (approval number: 4885) and written consent from the patients.

The following pieces of patient information were collected at the time of enrollment: age, sex, BMI, and duration of illness. At the time of enrollment and 12 months (±2 months) thereafter, the participants underwent investigations assessing their L-dopa equivalent daily dose (LEDD) [11,12], Hoehn and Yahr scale, and MDS-UPDRS, as well as videorecording of their gait motion with AKIRA®. The MDS-UPDRS consists of four parts from I to IV: Part I: Non-motor aspects of experiences of daily living (nM-EDL); Part II: Motor aspects of experiences of daily living (M-EDL); Part III: Motor examination; and Part IV: Motor complications [6] (see Supplementary Table S1). For the MDS-UPDRS items that ask about the left/right and upper/lower limbs independently, the total scores for all limbs were used for evaluation (see Supplementary Table S1).

We used a high-performance video camera equipped with an infrared device (Kinect v2), which is an infrared light source, and which is sensitive to infrared light [8]. The Kinect v2 is a range-imaging camera system employing time-of-flight techniques to resolve the distance between the camera and the subject for each point of the image by measuring the round-trip time of an infrared light signal emitted by the camera. The camera was horizontally placed at a distance of 4 m from the subject’s position and adjusted to a height of 80 cm from the floor. Before beginning to walk, subjects remained in a sitting position to rest for 5 min and were confirmed as having no fatigue. Then, the subjects were instructed to walk naturally toward the camera, and gait motions from the 4 m point to the 2 m point were recorded every 1/30 s. The subjects were instructed to pass the 2-meter point without stopping. The subjects maintained their faces toward the camera, and the horizontal, vertical, and anteroposterior directions were defined as the X-axis, Y-axis, and Z-axis, with the right, upper, and front sides being the + direction of each respective axis.

Spearman’s rank correlation coefficient was used to measure the relationships between the tilt angles, ankle heights, and walking speeds with the MDS-UPDRS item scores, the Parts I, II, III, and IV subtotal scores, the total score, and the Hoehn and Yahr scale. The tightness of the correlations were classified into the following 4 groups based on the correlation coefficient: strong, ≥0.6; moderate, ≥0.4 and <0.6; weak, ≥0.2 and <0.4; and none, <0.2. The Wilcoxon signed rank test was used to detect changes in each variable over 1 year from the baseline. SPSS ver. 25 (IBM SPSS Statistics for Windows, IBM Corp., Armonk, NY, USA) was used for all statistical analyses. Numerical values are shown in the form of mean (median) or mean ± SD. All statistical tests were two-tailed tests with a significance level of p < 0.05.

3.3. Time Course of Each Indicator

The values measured with AKIRA® were confirmed to be quantitative and reliable. Therefore, the forward and lateral tilt angles of the neck and trunk determined as by three-dimensional gait and motion analysis are considered to be candidate measures for severity evaluation in PD patients. Moving forward, multi-center prospective studies may be necessary for verification.

This study was performed in line with the principles of the Declaration of Helsinki. This study was approved by the Ethics Committee of the St. Marianna University School of Medicine (approval No. 4885, 17 September 2020).

The data are available upon request.

The authors declare that there are no conflict of interest regarding this article. 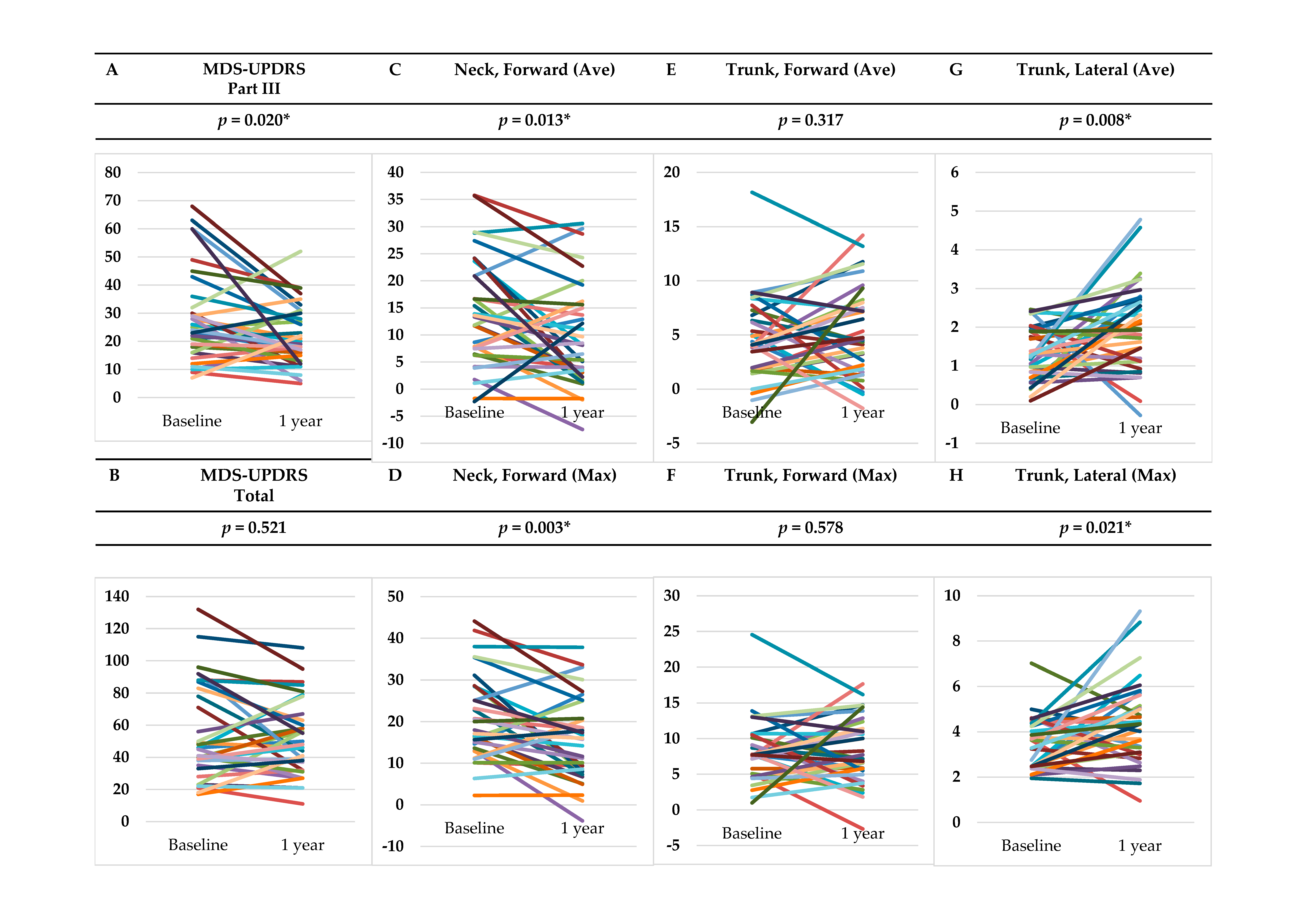