Spontaneous coronary artery dissection (SCAD) is a rare cause of acute coronary syndrome and sudden cardiac death. SCAD is the result of the formation of a hematoma in the coronary arterial vascular wall, in the absence of a traumatic or iatrogenic cause [1]. The most common cause is atherosclerosis. In addition, SCAD is associated with pregnancy, fibromuscular dysplasia, and vigorous exercise. In approximately 3% of SCAD cases a genetic defect can be identified [2]. Genetic causes include polycystic kidney disease and connective tissue disorders. Establishing a genetic diagnosis allows for disease specific follow up for the patient. In addition, pre-symptomatic testing and preventive measures in relatives may be lifesaving. Here, we present the case of a previously healthy woman diagnosed with SCAD. Genetic testing resulted in the diagnosis of vascular Ehlers-Danlos syndrome (vEDS). vEDS is an autosomal dominantly inherited connective tissue disorder caused by pathogenic variants in the COL3A1 gene encoding type III procollagen. vEDS patients are at risk for arterial, bowel, and uterine rupture and pneumothorax. In addition, other recognizable phenotypic features are often present. These include thin, translucent skin, easy bruising, characteristic facial appearance, joint hypermobility, and acrogeria. The reported prevalence is 1:50,000–1:200,000. However, this is likely to be an underestimation since prevalence estimates in rare genetic disorders are often based on only the ‘classical’ severe phenotypes of the disorders [3]. This is not surprising as only a few years ago DNA testing was very time consuming and expensive and was only performed in patients with a high prior risk of a genetic disease. In 2017, criteria suggestive of vEDS were proposed. Arterial rupture or dissection in individuals younger than 40 years is one of the major criteria [4]. This report underlines that SCAD may be the sole presenting feature of vEDS in the absence of other features associated with the disorder. In addition, this report shows that genetic testing may be the only way of establishing a diagnosis.
Case. A 33-year-old previously healthy woman presented with sudden onset chest pain. She was diagnosed with a myocardial infarction caused by SCAD. She was treated successfully by percutaneous coronary intervention with placement of four stents (Figure 1). Since in a minority of patients a spontaneous arterial dissection is caused by an underlying genetic cause, she was referred for genetic counselling. Her medical history (including two uncomplicated pregnancies), family history, and physical examination did not reveal any further signs indicating a connective tissue disorder or hereditary kidney disease. The prior risk of a genetic cause therefore was low. A previously reported heterozygous pathogenic variant, c.1744G >A p.(Gly582Ser) in the COL3A1 gene was identified using targeted next generation sequencing analysis of 21 genes associated with aortic dilatation and Marfan-like syndromes, confirming the diagnosis of vEDS. Establishing the diagnosis allowed for disease specific recommendations including vascular imaging, strict regulation of blood pressure, and additional vascular imaging. Regulation of blood pressure was first attempted with celiprolol, as suggested by the BBEST study, but was switched to atenolol due to side effects (frequent headaches) [5]. MRA was performed and no other arterial aneurysms or dissections were present. The patient remains under regular surveillance. Relatives were offered the option of pre symptomatic genetic testing.

This case underlines that isolated SCAD can be the sole presenting feature of vEDS and further illustrates the clinical variability that can be associated with pathogenic COL3A1 variants. The role of genetic testing in SCAD patients remains to be established. In a recent study, among 384 SCAD survivors from the UK a pathogenic variant was detected in 14 patients (3.6%), including two COL3A1 variants [2]. In many cases, the presence of recognizable skeletal features, age at presentation, or family history will provide additional clues for an underlying genetic disease. However, these clues are easily missed, and they may be completely absent as illustrated by this report [6]. In some patients, DNA testing can therefore be the only way to diagnose these genetic disorders. In families and patients without the classical presentation of a genetic predisposition, it is likely that DNA testing is not performed, resulting in preventable morbidity and mortality. This is illustrated by a recent study by our group in 810 patients referred for genetic testing after diagnosis of a thoracic aortic aneurysm or dissection. A (likely) pathogenic variant was detected in 66 of 810 patients (8.1%). The mean age at DNA testing in the group of patients with an identifiable genetic cause was 11 years younger than the mean age in the group without a genetic cause. However, 10 of the 66 patients carrying a pathogenic or likely pathogenic variant (15.2%) were over the age of 60 years at the time of DNA testing. Of these, three had a negative family history for aortic disease and no systemic features of a connective tissue disorder [7]. These observations indicate the need for increasing awareness of these genetic disorders and improvement of evidence-based guidelines for DNA testing. The time and costs associated with DNA testing have decreased rapidly over recent years. In addition, the availability of large genomic population databases has facilitated the interpretation of detected variants. When combined, these factors have resulted in the possibility of genetic testing at lower thresholds in many countries. Evaluation of existing guidelines in breast cancer patients indicated that nearly half the (likely) pathogenic variants are missed using current guidelines for DNA testing. The option of offering all breast cancer patients the possibility of genetic testing is currently being debated by some experts [8,9]. This debate is likely to include other diseases, possibly including SCAD in the near future.

Conceptualization, E.O. and A.C.H.; writing—original draft preparation, all authors; writing—review and editing, all authors. All authors have read and agreed to the published version of the manuscript.

The study was conducted according to the guidelines of the Declaration of Helsinki and approved by the Ethics Committee of Amsterdam University Medical Centers (NL70190.018.19, approved 5 August 2019).

Informed consent for publication was obtained from the patient reported in this study. 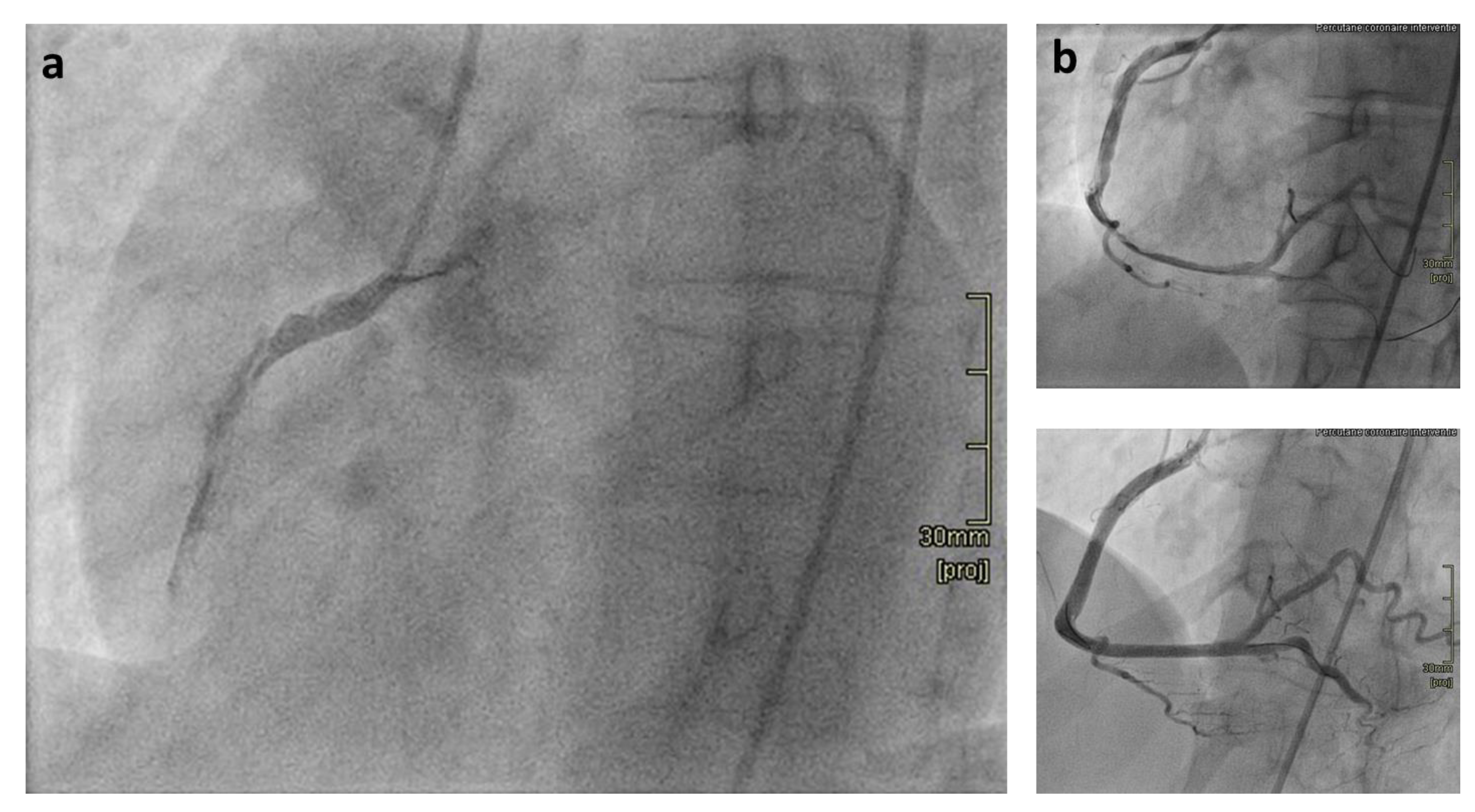