Genetic Susceptibility to SARS-CoV-2: From the Nehandertal Age to 2020
Previous Article in Journal

Purpose: To evaluate the clinical features, laboratory and instrumental tests results and the effectiveness of complex treatment in a patient with multiple etiologies of dilated cardiomyopathy (DCM) with a high risk of sudden cardiac death. Methods: Female patient was 34 years old. Follow up period was seven years. Since the age of 23 (after a respiratory infection), chest pains and shortness of breath appeared. Coronary arteries were intact. After syncope in 2013, Holter-ECG was performed: 2048 premature ventricular beats (PVBs)/day and episode of sustained ventricular tachycardia (VT, 1 min) were registered. MRI was performed, and a cardioverter defibrillator (ICD) was implanted. Results: ECG showed low QRS voltage and negative T waves in leads V2-V6, III, aVF. In signal-averaged ECG, late potentials were detected. Echocardiography (EchoCG) demonstrated left and right ventricular dilatation, diffuse reduction of left ventricular (LV) contractility and multiple pseudochordae in LV. MRI showed LV noncompaction (LVNC), thickening of the epicardial fat and hypo-/dyskinesia of the anterior wall of the right ventricular (RV), dilatation of both ventricles with decrease of their ejection fraction and subepicardial gadolinium enhancement in the early and late phase in the LV, intraventricular septum and the free walls of the RV. The presence of LVNC was confirmed by cardiac computed tomography (CT). Late contrast enhancement in the middle and subendocardial layer of the LV was observed as well. The level of anticardiac antibodies was high (1:160–1:320). The reasons for statement of a possible diagnosis of myocarditis in this case were the connection of the onset of symptoms with viral infection, high titers of anticardiac antibodies, and early and late subepicardial contrast enhancement by MRI and CT. The endomyocardial biopsy was obtained, and subendocardial lipomatosis, separation of myocardium by fibrous septa, lymphocytic infiltrates (more than 14 cells/mm2) and vasculitis were found. Viral genome in myocardium was not detected. A new splicing mutation in the desmoplakin (DSP) gene was found (NM_004415.4: c.1141-2A>G/N (rs794728111)). Combination of arrhythmogenic right ventricular cardiomyopathy (ARVC), LVNC and myocarditis was diagnosed. Immunosuppressive therapy (prednisone and azathioprine) was prescribed, LV ejection fraction stabilized at the level of 40%. The appropriate shocks of the ICD due to sustainedVT (HR 210/min) with transformation into ventricular fibrillation were recorded twice. For this reason, sotalol was temporarily replaced with amiodarone. After the suppression of myocarditis activity, sustained VT and ICD interventions were not observed. Conclusions: In a young patient with arrhythmogenic syncope and DCM syndrome, a combination of ARVC (two major and three minor criteria, definite diagnosis) and LVNC with the biopsy proved virus-negative chronic myocarditis was diagnosed. DCM as a syndrome can have multiple causes, and the combination of myocarditis and primary cardiomyopathy is not rare. LVNC can be observed in patients with typical desmosomal protein mutations. The use of immunosuppressive therapy led to the stabilization of heart failure and decreased the risk of arrhythmic events. View Full-Text
Keywords: arrhythmogenic right ventricular cardiomyopathy/dysplasia; left ventricular noncompaction; myocarditis; premature ventricular beats; ventricular tachycardia; endomyocardial biopsy arrhythmogenic right ventricular cardiomyopathy/dysplasia; left ventricular noncompaction; myocarditis; premature ventricular beats; ventricular tachycardia; endomyocardial biopsy
►▼ Show Figures 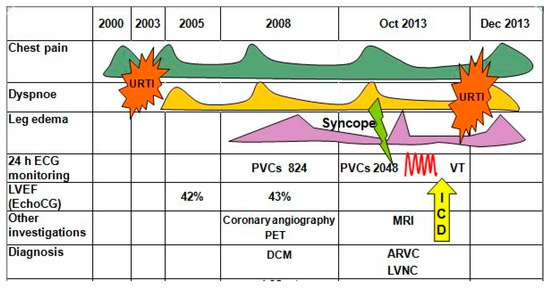