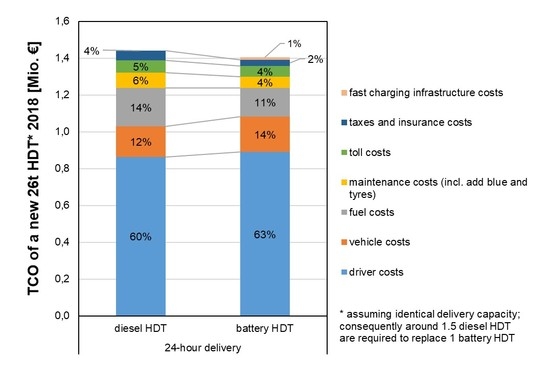 Air pollution causes more than 300,000 premature deaths per year in Europe [1]. Large proportions of the main air pollutants can be attributed to road traffic, such as nitrogen oxide (NOX: 30%), carbon monoxide (CO: 20%), fine particulate matter (PM2.5: 11%), and non-methane volatile organic compounds (NMVOC: 7%) [2]. Freight and passenger traffic, and therefore transportation-induced air pollution, is heavily concentrated in urban areas, posing a huge risk to the health of local residents. In order to reduce these emissions and improve human health, there are emission regulations at different legislative levels, and regulatory limits for air pollutant emissions [3]. Many cities, however, are struggling to comply with these regulatory limits, forcing them to implement further measures. In this context, urban access regulations banning diesel-powered vehicles from inner cities are currently being widely discussed, particularly in Germany [4]. Such regulations pose a serious threat to logistics service providers (LSP) that are active in city logistics (e.g., retail logistics service providers for food, clothes, furniture, electronics, etc.), because their fleets rely heavily on quite old diesel heavy-duty trucks (HDTs) that do not comply with high emission standards. If strict diesel bans are enforced for urban areas, most LSPs would have to replace their entire vehicle fleet very quickly.
Shifting the fleet to vehicles with alternative powertrains is the preferable option to bypass diesel bans. Battery-electric HDTs are an alternative to diesel HDTs [5], but have technical restrictions, such as limited range and payload and limited availability on the market. However, the high initial investments required are the biggest barrier to their implementation, particularly in a cost-competitive business such as logistics. For this reason, there are very few battery-electric HDTs in LSPs’ fleets. In contrast to the higher upfront investments, the variable costs of battery-electric HDTs are much lower than those for diesel HDTs. This means that high annual mileages are beneficial for battery-electric HDTs. One way to increase the annual mileage of HDTs in a city logistics context is to implement off-hour or even nighttime delivery in addition to daytime delivery [6,7,8]. This extends delivery hours and has two major benefits: the opportunity to relieve traffic congestion during the day by shifting transports into the night, and to improve environmental conditions by reducing air pollution during peak-hours. Due to local noise restrictions at night, however, nighttime delivery is only possible with battery-electric HDTs. Implementing nighttime delivery in addition to daytime delivery, resulting in 24-hour delivery slots, increases the number of trips that a single battery-electric HDT can make each day, and therefore its daily mileage. This also leads to a battery-electric HDT increasing its daily delivery capacity and reduces the total number of vehicles required as a consequence. The literature provides little information about the economic costs and benefits of implementing 24-hour delivery with battery-electric HDTs or how battery-electric HDTs could diffuse in a LSP’s fleet. We want to address this research gap and conduct a German case study, as diesel bans are currently being widely discussed in Germany.
In this study, we explore whether battery-electric HDTs providing 24-hour delivery services could be an economic alternative to diesel HDTs in city logistics by addressing two research questions:
The paper is structured as follows. In Section 2, we briefly outline the theoretical background, before we present the methodology and data used for the analysis in Section 3; and the results in Section 4. We conclude with a discussion and conclusions in Section 5.

From the LSP’s perspective, introducing battery-electric HDTs and 24-hour delivery can be considered the adoption of an innovation or technology. This is why the study builds on adoption theory. In the literature, numerous models exist for the adoption of innovations and technologies [9,10,11,12]. A suitable model that is frequently used is the unified theory of acceptance and use of technology (UTAUT) according to [9]. It is based on the technology acceptance model [13], and in addition to the expected effort and benefits, includes social influence and facilitating conditions as constructs that influence the intention to use and the actual use of innovative technologies. The expected benefit is defined as the degree to which performance is improved, and the expected effort represents the usability of the technology. Social influence refers to the expectations of the environment regarding the use of a technology. This aspect underlines the suitability of UTAUT for this study, since the ecological and social requirements of society and politics play an important role. Beyond that, facilitating conditions indicate the extent to which the environment supports the use of the technology [12]; in this case, the stores. All in all, adoption theory can make an important contribution to explaining the acceptance and use of battery-electric HDTs in 24-hour delivery by LSPs (supplier) and retail stores (customer).
Beyond that, we employ the service profit chain (SPC) as a concept that links a company’s activities to its economic success through the effects of those activities on the customer [14]. The SPC can be traced back to [15], who found that revenues are driven by the perceived quality of service and the underlying employee costs. The concept enables us to understand how operational activities and investments, such as implementing battery-electric HDTs and 24-hour deliveries, can be translated into improved service processes, improved customer perception, desired customer behavior, and economic business success [15]. It therefore provides an explanatory contribution to linking the company and customer perspective when implementing battery-electric HDTs.

Four different HDTs (see Table 1) were included in the calculations, which represent the truck types used in a fleet operating from a specific warehouse of a German LSP. For the diesel HDTs, we could rely on real-life figures, whereas the prices for battery-electric HDTs were based on assumptions.
For battery-electric HDTs, we used the basic price for the truck chassis of a diesel HDT and added component costs for electric motors, power electronics, and the traction battery. The resulting prices were compared to announcements by HDT manufacturers concerning the potential price ranges of their future all-electric HDTs and were a good match.
We obtained data on the current fleet, demand, and delivery trips from a specific warehouse of the LSP, which we supplemented with further assumptions (see Table 2). We assumed that diesel HDTs operate between 6 a.m. and 10 p.m., while battery-electric HDTs operate for 24 hours. Furthermore, it is assumed that a battery range of around 180 km is sufficient based on the average trip length of 120 km and that no battery change is required during the HDT’s operating life. The average driving speed was based on expert interviews. A literature review indicated that the average driving speed tends to be around 30% higher for nighttime delivery [6,8,31]. Parameters on environmental conditions, such as battery prices [25] and fuel prices [26,44], were drawn from various sources, and techno-economic parameters were mostly retrieved from [26,45]. For fuel prices, projections were made up to 2042, which were based on [44] for diesel and on [46] for electricity.
As an example, Table 4 presents the parameters for a 26t HDT in 2018, which is the most used truck in the LSP’s fleet. All assumptions are for Germany and prices are net and in EUR2018.
We calculated the model with two different scenarios, which mainly differ in terms of battery prices and fuel prices. In the first scenario, which is called “moderate energy transition” (ME), we assumed that a moderate transition towards renewable energy sources takes place. This results in decreasing battery prices and slowly increasing electricity prices. In the “expensive sustainability” (ES) scenario, battery prices decrease slower, but electricity prices increase quite rapidly. The prognosis of the electricity prices was taken from [46], while the diesel price forecast was based on [44]. For details see [20].

Figure 8 shows the results regarding the diffusion of battery-electric HDTs in the LSP’s fleet. Again, we calculated the two scenarios ME and ES to consider different potential developments.
In both scenarios, battery-electric HDTs diffuse quickly in the LSP’s fleet, replacing diesel HDTs almost entirely after slightly more than one decade. This is interesting, especially in the light of the assumed operating life of 9 years for HDTs. It seems that the operating lifetime of HDTs has a major impact on the duration of the diffusion process. Another interesting development is the decreasing total number of HDTs required to meet slightly increasing demand. Because of the higher delivery capacity of battery-electric HDTs with their growing share in the fleet, fewer HDTs are required overall. The fast diffusion can be attributed to the low transportation costs of battery-electric HDTs.
On the customer side, the demand of retail stores of type I and II (no and little retrofitting effort) for nighttime delivery increases very quickly and reaches its full potential after just over a decade, which is similar to the period for battery HDTs diffusion. Retail stores of type III, however, show almost no demand, which is due to the high retrofitting effort. Accordingly, the demand for and supply of nighttime delivery with battery-electric HDTs increase very quickly and almost in parallel.

This publication was written in the framework of the Profilregion Mobilitätssysteme Karlsruhe, which is funded by the Ministry of Economic Affairs, Labor, and Housing in Baden-Württemberg and as a national High Performance Center by the Fraunhofer-Gesellschaft. 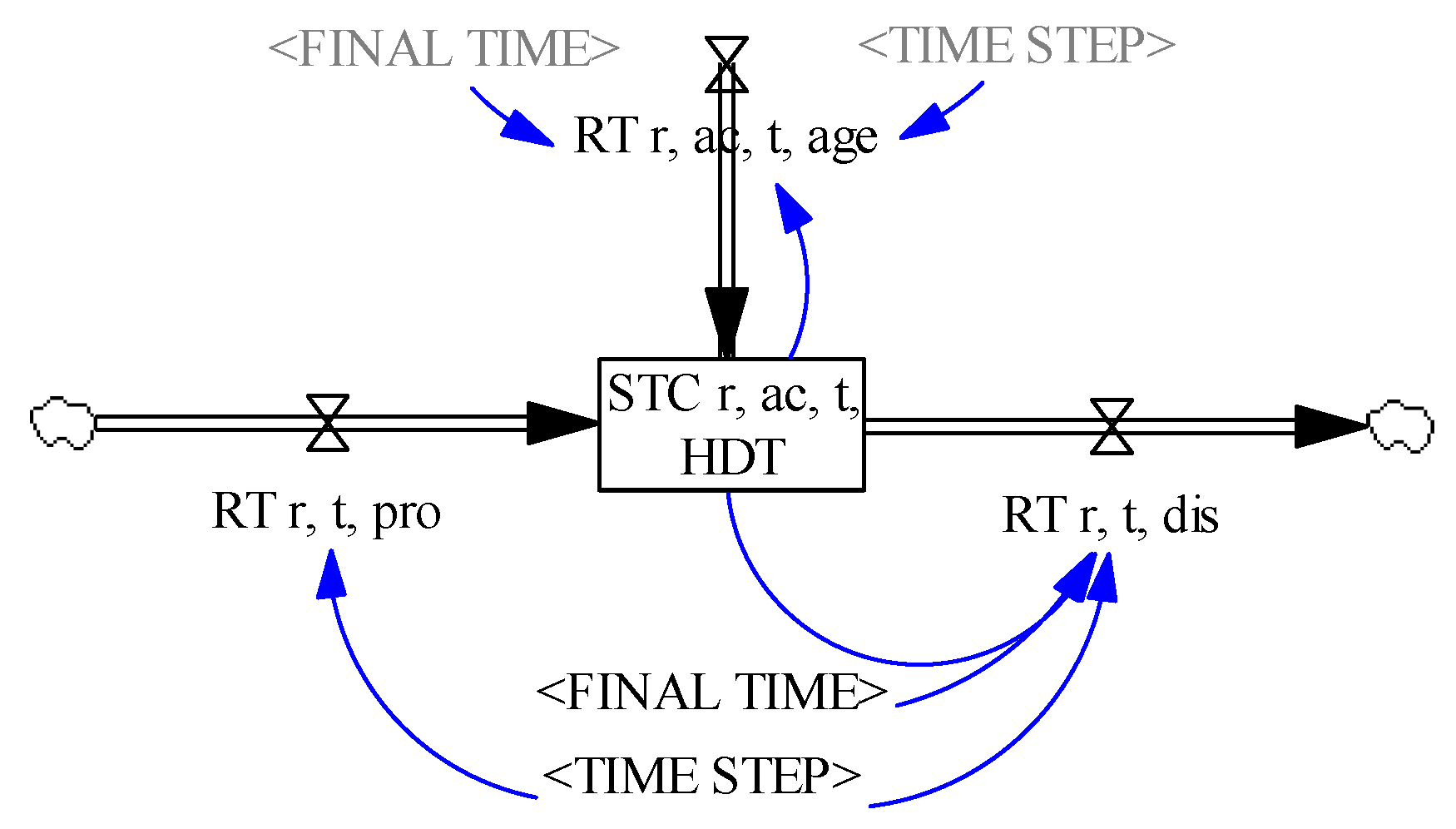