Usefulness of Artificial Membrane, Strat-M®, in the Assessment of Drug Permeation from Complex Vehicles in Finite Dose Conditions
Previous Article in Journal

Visual impairment and blindness are global health issues that pose substantial financial burdens for governments across the globe. In 2013, the total economic cost of vision loss in the United Kingdom (UK) was estimated at £15.8 billion [1]. Recent data state that the global prevalence of visual impairment was estimated at 285 million, of which 39 million are blind [2]. In particular, approximately 82% of all blind people are aged 50 years and over and are usually dependent on multiple medications [3]. As such, managing multiple medications on a daily basis can be difficult, especially if it involves the treatment of chronic conditions where elderly patients are even more likely to require help from a carer [4]. In turn, this could pose a serious problem in terms of patient compliance, potentially resulting in poor medication adherence, which could lead to poor treatment management, reduced therapeutic efficacy and subsequent hospitalisations. Previous studies revealed that one of the leading causes of medication non-adherence was impaired vision, wherein approximately 97% of patients with visual impairment have difficulties reading medication labels, even in the presence of optical aids, and around 24% have difficulties in distinguishing medications [4,5]. Moreover, patients with visual impairment are twice more likely to need assistance with medicine management, wherein one-third of the patients will require continual support for medication administration.
Currently, Braille is the universal tactile writing system used by the blind. It was invented by Louis Braille in 1825 and consists of up to six raised dots (height = 0.5 mm, space in between dots = 2.5 mm) in specific arrangements that represent different letters of the alphabet [6,7]. Another commonly used system is the Moon system, which was developed by William Moon in 1845. It is based on Latin Roman letters produced using raised shapes that are similar to the standard alphabets [8]. Compared to Braille, the Moon system is often considered easier to learn, especially for those who are not familiar with the raised dot patterns [9]. Currently, one approach to help visually impaired patients with medicine identification is the inclusion of Braille on the packaging of a medicinal product. Nonetheless, due to the absence of standardised packaging, patients often struggle to identify medications, especially in the case of generic medicines that could have an entirely different appearance and/or tactile sense (e.g., different size, shape, and/or colour of tablet and different package). Moreover, identification through pharmaceutical packaging becomes less useful when the patient removes the medicine out of its original container [4].
To overcome the issues with inaccurate identification of medication labels or doses by visually impaired patients, it is essential to develop a direct, standardised and cost-efficient method of incorporating Braille or Moon patterns on drug products themselves. In this regard, three-dimensional (3D) printing may offer an elegant and practical solution to the problem. 3D printing is an additive manufacturing technique in which an object is built up in a layer-by-layer manner [10,11,12,13,14], based on a 3D model designed using computer-aided design (CAD) software [15,16,17,18,19]. At present, 3D printing is often used to produce engineering prototypes due to its fast production speed and cost-effectiveness [20,21,22,23]. In the field of drug delivery, diverse constructs were already prepared using 3D printing ranging from drug-eluting implants [24,25,26,27] to medical devices [28,29,30], and personalised solid oral dosage forms [31,32,33,34,35,36,37,38,39]. In particular, 3D printing was shown to offer novel solutions to problems faced by specific patient groups [40,41,42,43,44]. For instance, a study evaluating the effect of shape and size on picking and swallowing of 3D printed tablets (also known as printlets) showed that certain new designs may be better accepted than conventional shapes [45]. More recently, a study concerning paediatric patients with a rare metabolic disease (maple syrup urine disease, MSUD) [46] indicated that 3D printing provides a viable approach to fabricate tailored medicines on-demand [47], improving acceptability and efficacy of treatment.
Selective laser sintering (SLS) is a powder-based 3D printing technology in which a laser beam is used to selectively bind powder particles together to create 3D objects [48,49,50]. SLS 3D printing is used in the fields of tissue engineering to produce scaffolds [51,52,53,54,55], and drug delivery to fabricate printlets with different release characteristics such as orally disintegrating [56,57,58], immediate release and modified release dosage forms [59]. Due to the high resolution of the laser, novel structures, such as 3D-gyroid lattices, bi-layer printlets [60] and dual miniprintlets [61], can be easily fabricated using different polymers, which could be engineered to exhibit customised drug release profiles tailored to individual patient needs. Thus, the aim of this study was to introduce a novel and practical approach for making dosage forms suited for patients with visual impairment. As such, SLS 3D printing was used to fabricate orally disintegrating printlets (ODPs) with Braille and Moon patterns. In doing so, patients could utilise these tactile patterns to identify medications, especially when they were taken out of their original packaging. Moreover, as these printlets are designed to disintegrate rapidly in the mouth, they do not require the co-administration of water. As such, this encourages self-administration of medicines, improving patient compliance and treatment efficacy.

Paracetamol, United States Pharmacopeia (USP) grade (Sigma-Aldrich, Poole, UK), was used as a model drug. Kollidon VA64 (BASF, Ludwigshafen, Germany), a vinylpyrrolidone-vinyl acetate copolymer having a molecular weight of around 45,000 Da with instant release properties, was used for SLS printing. Candurin® Gold Sheen, which is a pharmaceutical pigment, was purchased from Merck, Darmstadt, Germany. The Braille and Moon alphabet cards were provided as a reference by the Royal National Institute of the Blind (RNIB) in the UK.

A 100 g blend of 92% Kollidon VA64, 5% paracetamol and 3% Candurin® Gold Sheen was prepared using a mortar and pestle until homogeneously mixed. This powder mixture was selected for printing due to its good printability and fast disintegration properties [56]. Candurin® Gold Sheen was added into the formulation as an absorbent to yield an optimum sintering process. This is because the powder mixture absorbs the maximal amount of energy from the laser beam at this wavelength (445 nm).

2.4.1. Determination of the Printlet Morphology

The average weights of six printlets from each letter were measured, where the percentage of weight differences due to the addition of each letter was calculated.

Surface images of the Braille and Moon patterns of the letter O were obtained using a scanning electron microscope (SEM, JSM-840A Scanning Microscope, JEOL GmbH, Freising, Germany). All the samples were coated with carbon (~30–40 nm).

Drug release profiles of the printlets in the presence and absence of the patterns were obtained using a USP II dissolution apparatus (PTWS 100, Pharmatest, Hainburg, Germany). For each test, the printlets (n = 3) were placed in 900 mL of 0.1 M HCl (pH 1.2), simulating gastric conditions. The test conditions were set at a paddle speed of 50 rpm and a temperature of 37 ± 0.5 °C. The percentage of drug released was calculated from the absorbance measured at 244 nm using an in-line ultraviolet (UV) spectrophotometer (Cecil 2020, Cecil Instruments Ltd., Cambridge, UK).
For comparison between dissolution profiles of the printlets with and without added patterns, an ƒ2 similarity factor was calculated to determine how similar the dissolution profiles were for printlets with and without added patterns. The equation for calculating the ƒ2 similarity factor was proposed by Moore and Flanner, as shown below (Equation (1)). where ƒ2 is a similarity factor, n refers to the number of observations, Rt is the average percentage of drug released from the reference printlets, and Tt is the average percentage of drug released from test printlets [63].
It was proposed that, for two dissolution profiles to be considered similar, a similarity factor of or greater than 50 (e.g., 50–100) should be attained [64].

One-way ANOVA was used to evaluate whether the differences in breaking force and disintegration time of the printlets with or without the Braille patterns were statistically significant or not (p < 0.05) (OriginPro 2019, OriginLab corporation, Northampton, MA, USA).

For the first time, this study demonstrates the use of 3D printing to fabricate personalised dosage forms targeted to blind or visually impaired individuals. The SLS 3D printing technique could be used to manufacture printlets with Braille or Moon patterns on their surface that could be read by blind individuals. It is likely that this innovative concept will provide a revolutionary approach for the treatment of visually impaired individuals, improving independence, medicine adherence and reducing medicine errors.

The authors would like to acknowledge the Royal National Institute of the Blind (RNIB) for their input and the assistance provided by Andrew Weston with the SEM imaging.

A.G., S.G. and A.W.B. are founders of the pharmaceutical company FabRx, and as indicated in the Author Contribution section they took part in the design of the study; in the collection, analyses, or interpretation of data; in the writing of the manuscript, and in the decision to publish the results. 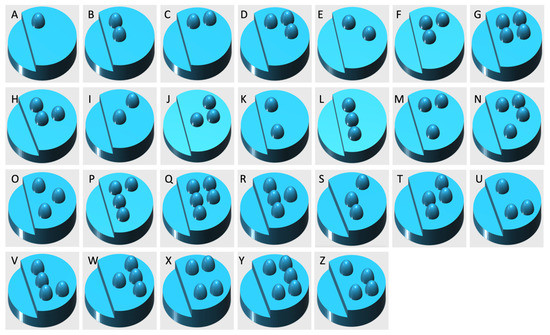 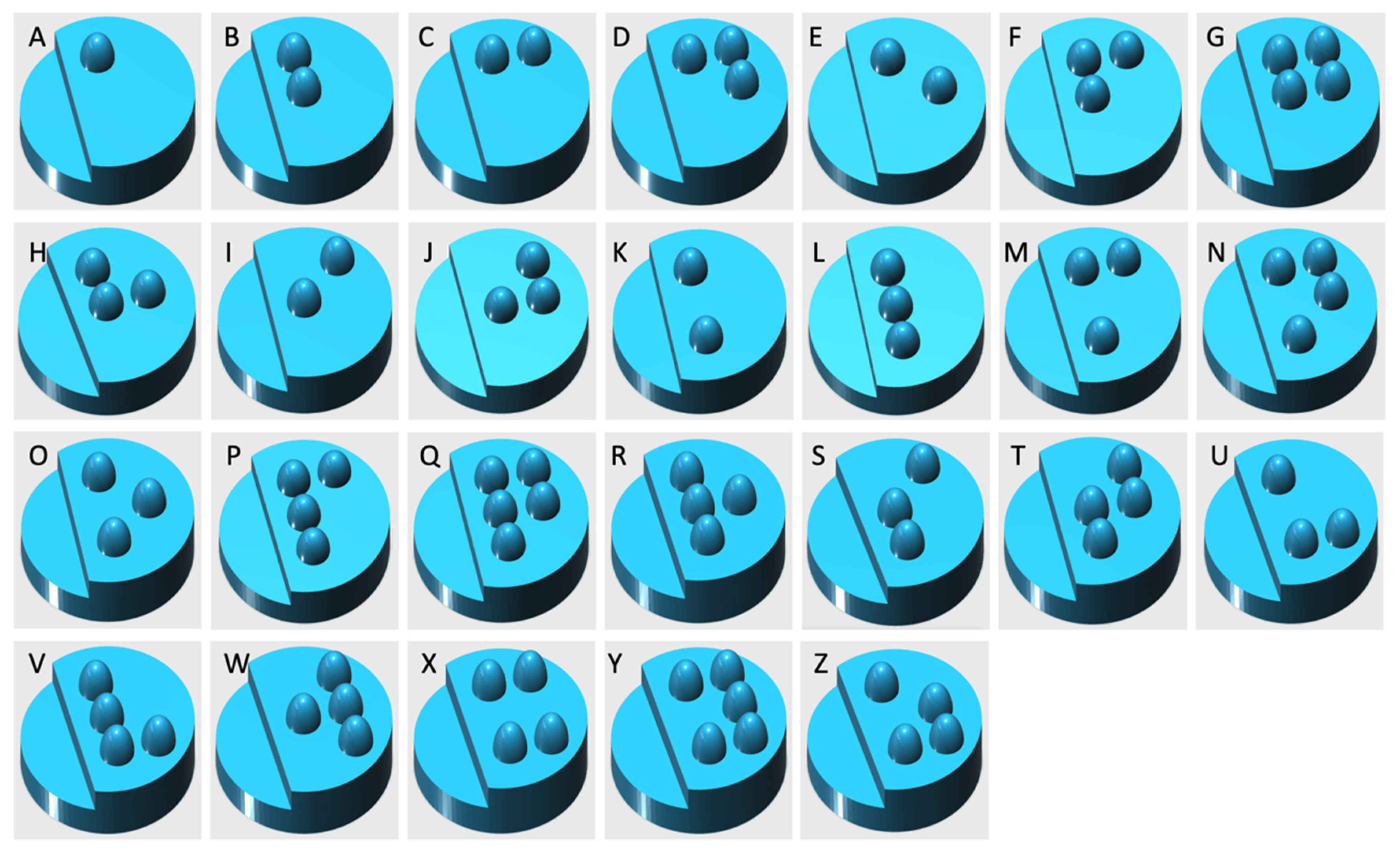 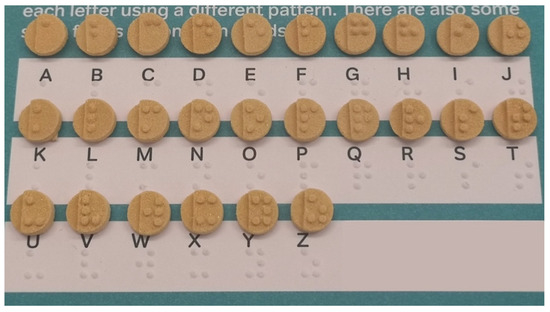 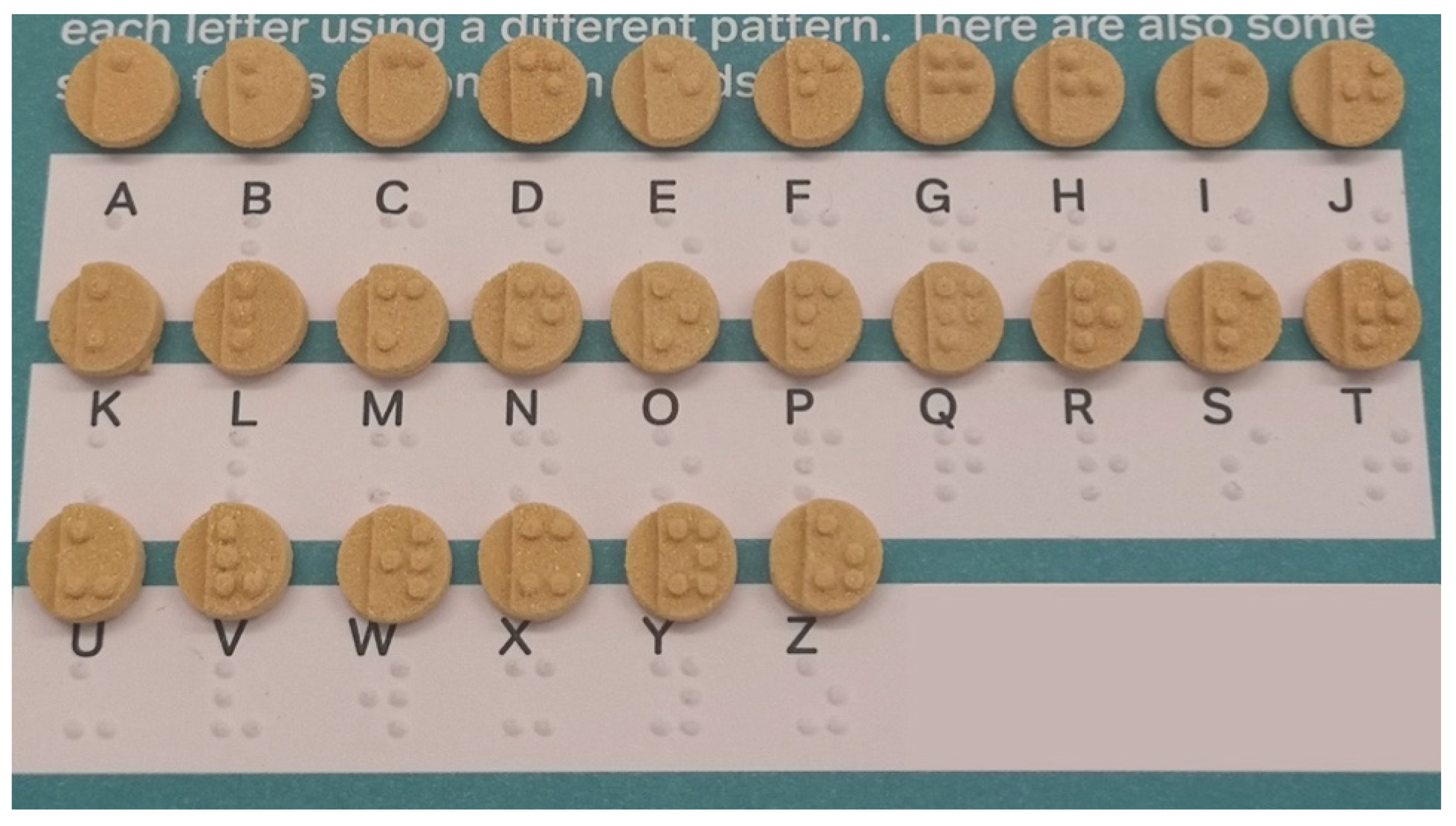 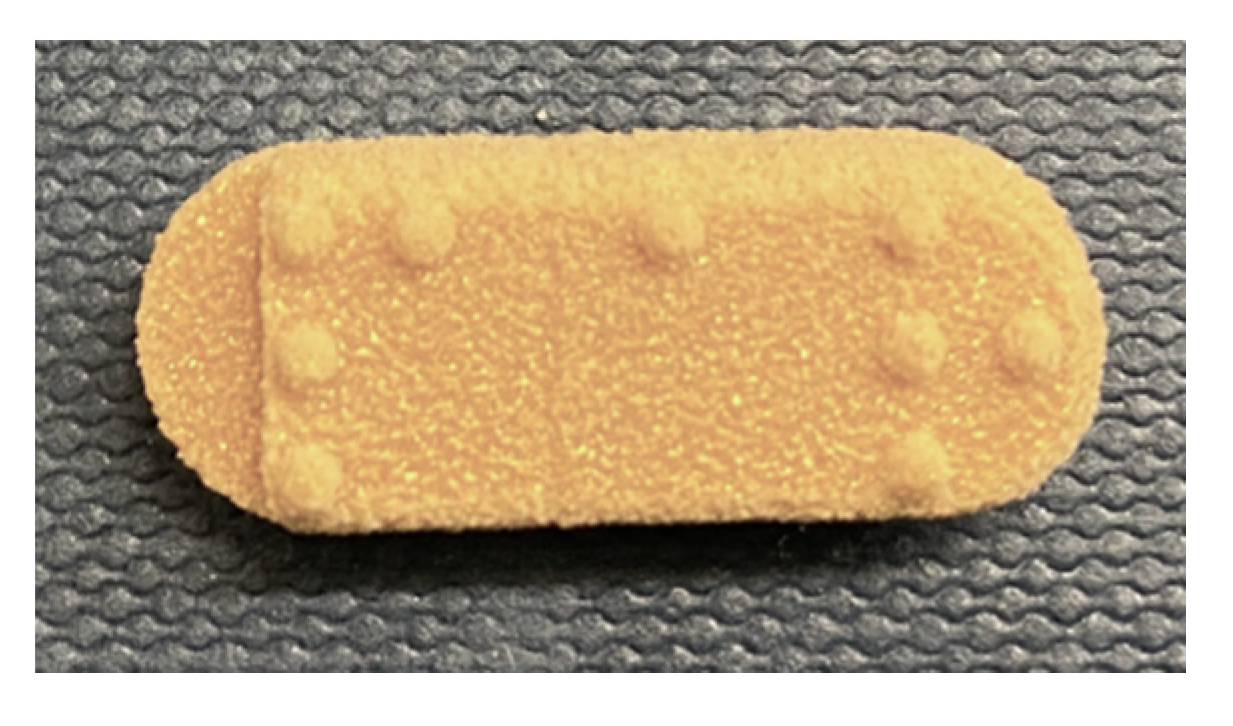 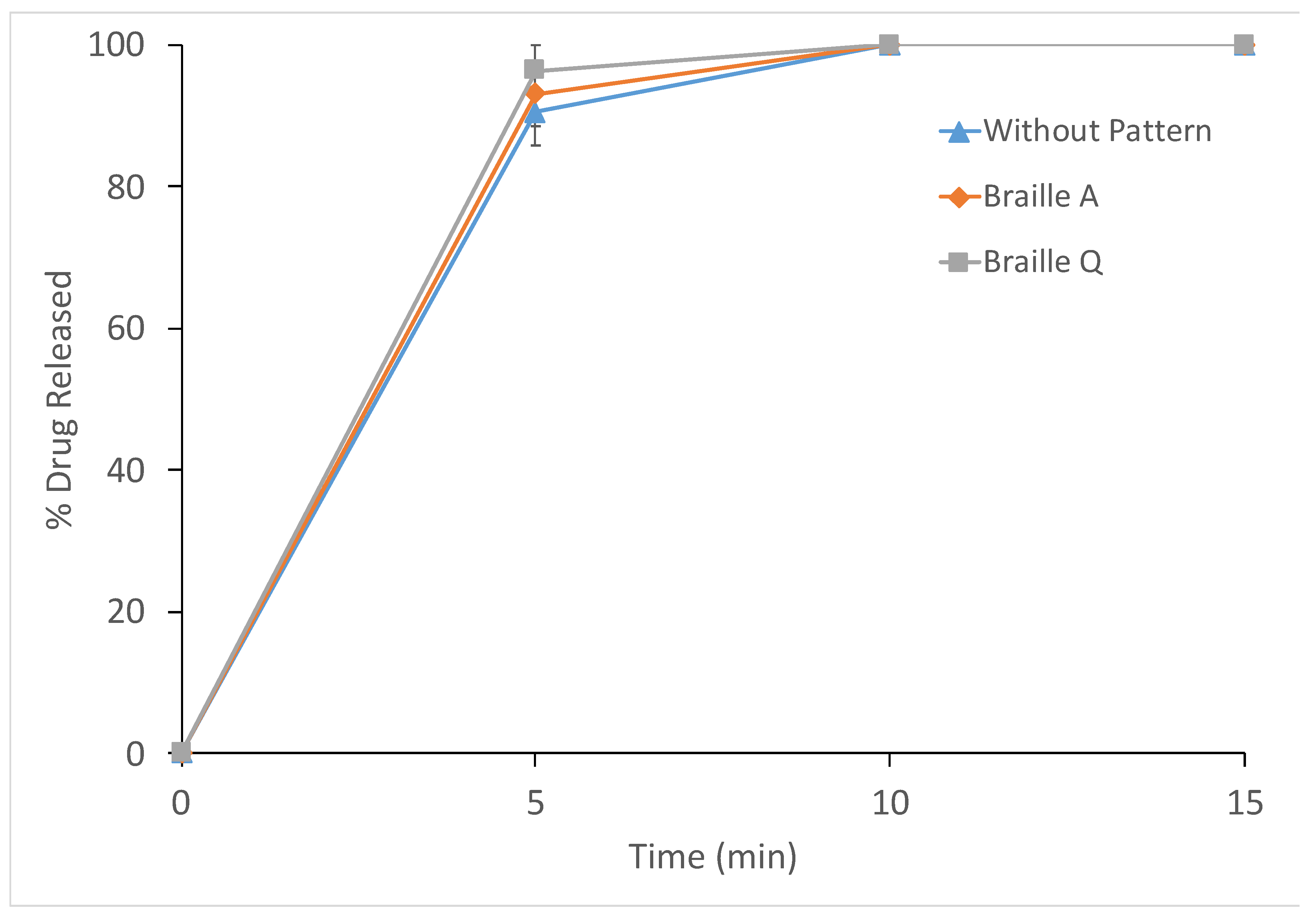