The aim of this study was to investigate the effects of various parameters at each control strategy in drug product degradation on the stability of pemetrexed in injectable aqueous solution. A forced degradation study confirmed that oxidation is the main mechanism responsible for the degradation of pemetrexed in aqueous solutions. As control strategies, the antioxidant levels, drug concentration, pH of the control formulation, dissolved oxygen (DO) levels in the control process, and headspace oxygen levels in the control packaging were varied, and their effects on the stability of pemetrexed were evaluated. Sodium sulfite was found to be particularly effective in preventing the color change, and N-acetylcysteine (NAC) had a significant effect in preventing chemical degradation. The sulfite and NAC were found to stabilize pemetrexed in the aqueous solution by acting as sacrificial reductants. A pH below 6 caused significant degradation. The stability of pemetrexed in the solution increased as the concentration of the drug increased from 12.5 to 50 mg/mL. In addition, the DO levels in the solution were controlled by nitrogen purging, and the oxygen levels in headspace were controlled by nitrogen headspace, which also had significant positive effects in improving the stability of the pemetrexed solution; thus, it was confirmed that molecular oxygen is involved in the rate-limiting oxidation step. Based on these results obtained by observing the effects of various control strategies, the optimal formulation of an injectable solution of pemetrexed is suggested as follows: sodium sulfite at 0.06 mg/mL, as an antioxidant for prevention of color change; NAC at 1.63 mg/mL, as an antioxidant for prevention of chemical degradation; pH range 7–8; DO levels below 1 ppm; and headspace oxygen levels below 1%. In conclusion, it can be suggested that this study, which includes well-designed control strategies, can lead to a better understanding of the complex degradation mechanism of pemetrexed; thus, it can lead to the development of an injectable solution formulation of pemetrexed, with improved stability. View Full-Text
Keywords: pemetrexed; stability; aqueous injectable solution; oxidation; control strategy pemetrexed; stability; aqueous injectable solution; oxidation; control strategy
►▼ Show Figures 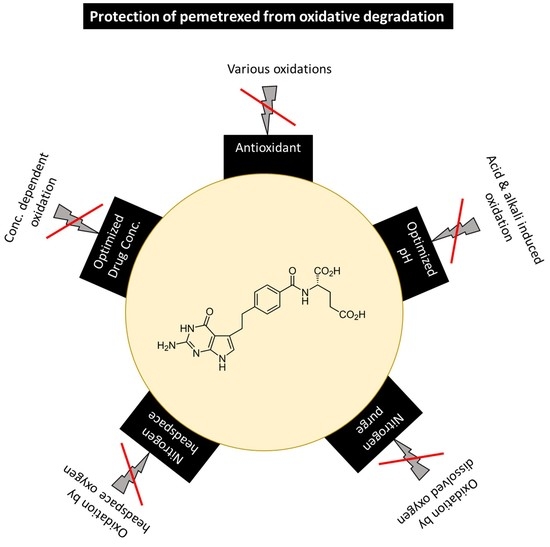