The Dynamic Life of Virus Capsids
Previous Article in Journal

An RNA-Directed Gene Editing Strategy for Attenuating the Infectious Potential of Feline Immunodeficiency Virus-Infected Cells: A Proof of Concept

Bacteriophages can play beneficial roles in phage therapy and destruction of food pathogens. Conversely, they play negative roles as they infect bacteria involved in fermentation, resulting in serious industrial losses. Siphoviridae phages possess a long non-contractile tail and use a mechanism of infection whose first step is host recognition and binding. They have evolved adhesion devices at their tails’ distal end, tuned to recognize specific proteinaceous or saccharidic receptors on the host’s surface that span a large spectrum of shapes. In this review, we aimed to identify common patterns beyond this apparent diversity. To this end, we analyzed siphophage tail tips or baseplates, evaluating their known structures, where available, and uncovering patterns with bioinformatics tools when they were not. It was thereby identified that a triad formed by three proteins in complex, i.e., the tape measure protein (TMP), the distal tail protein (Dit), and the tail-associated lysozyme (Tal), is conserved in all phages. This common scaffold may harbor various functional extensions internally while it also serves as a platform for plug-in ancillary or receptor-binding proteins (RBPs). Finally, a group of siphophage baseplates involved in saccharidic receptor recognition exhibits an activation mechanism reminiscent of that observed in Myoviridae. View Full-Text
Keywords: Bacteriophage; Siphoviridae; baseplate; receptor-binding protein; phage–host interactions Bacteriophage; Siphoviridae; baseplate; receptor-binding protein; phage–host interactions
►▼ Show Figures 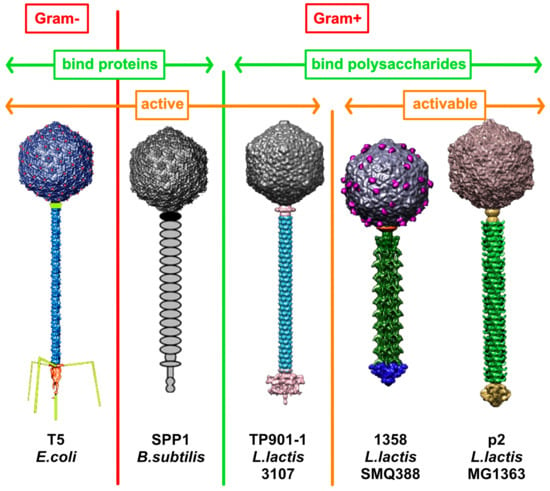