The Potential of Long-Acting, Tissue-Targeted Synthetic Nanotherapy for Delivery of Antiviral Therapy Against HIV Infection
Next Article in Special Issue

Development of a Reverse Genetics System for Toscana Virus (Lineage A)

Toscana virus (TOSV) is a Phlebovirus in the Phenuiviridae family, order Bunyavirales, found in the countries surrounding the Mediterranean. TOSV is an important cause of seasonal acute meningitis and encephalitis within its range. Here, we determined the full sequence of the TOSV strain 1500590, a lineage A virus obtained from an infected patient (Marseille, 2007) and used this in combination with other sequence information to construct functional cDNA plasmids encoding the viral L, M, and S antigenomic sequences under the control of the T7 RNA promoter to recover recombinant viruses. Importantly, resequencing identified two single nucleotide changes to a TOSV reference genome, which, when corrected, restored functionality to the polymerase L and made it possible to recover infectious recombinant TOSV (rTOSV) from cDNA, as well as establish a minigenome system. Using reverse genetics, we produced an NSs-deletant rTOSV and also obtained viruses expressing reporter genes instead of NSs. The availability of such a system assists investigating questions that require genetic manipulation of the viral genome, such as investigations into replication and tropism, and beyond these fundamental aspects, also the development of novel vaccine design strategies. View Full-Text
Keywords: reverse genetics; Phlebovirus; Bunyavirales; Toscana virus reverse genetics; Phlebovirus; Bunyavirales; Toscana virus
►▼ Show Figures 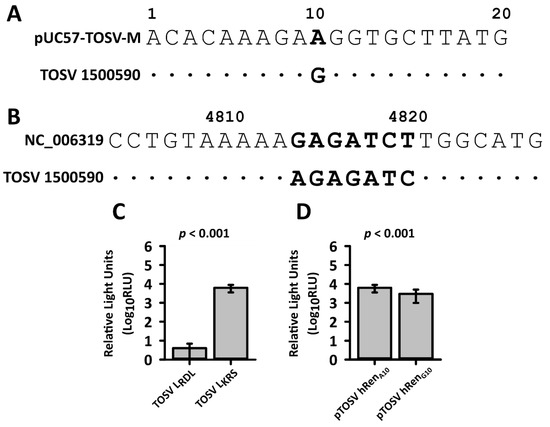