The porcine kidney cell line (PK-15) free of PCV1 was used. The cells were cultured at 37 °C with 5% CO2 in Dulbecco’s Modified Eagle’s Medium (DMEM) (HyClone, South Logan, UT, USA) containing 4% heat-inactivated fetal bovine serum (GIBCO, Grand Island, NY, USA) with 1% L-glutamine, 1% non-essential amino acids, 100 U/mL penicillin G, and 100 μg/mL streptomycin (100×, GIBCO). The PK-15 cells that stably expressed EGFP-LC3 (PK-15/EGFP-LC3) were generated and stored in our laboratory.
The PCV2 strain YW (GenBank accession no. MG245866) belonged to PCV2b and was originally isolated from the lung of a pig with naturally occurring PCVAD in Zhejiang Province, China. The virus was propagated in PK-15 cells and was used to generate the isogenic mutant with inactivation of the ORF3 protein (ΔORF3) [4]. The PCV2 parent strain YW and its ΔORF3 mutant contained 1×105.25 and 1×105.1 infectious virus particles per mL, respectively. As PCV2b has been the predominant genotype in the swine population and had a more significant effect than the PCV2d in inducing mitochondrial apoptosis [4], this genotype was chosen in this study to investigate its role in mitophagy.

PK-15 cells at approximately 50–60% confluence were infected with PCV2 or its ΔORF3 mutant strain at a multiplicity of infection (MOI) of 1 for 48 h to examine mitophagy, oxidative stress, or apoptosis. To investigate the effects of the oxidative stress and mitochondrial fission inhibitors on the changes of ROS and relevant molecules, PK-15 cells were first infected with PCV2 and then treated with NAC (10 mM) or Mdivi-1 (4 μM) at 2 h post infection (hpi). The cells were subjected to further incubation for specified periods according to the experimental goals. Mock-infected cells were included as controls. All infected and/or treated cells were collected for relevant assays described below.

PK-15 cells cultured in 24-well plates were washed with phosphate-buffered saline (PBS at pH 7.2, Beyotime) and collected in a cell lysis buffer (Beyotime) containing protease inhibitors (Roche Molecular Biochemicals, Mannheim, Germany) on ice. The cell lysates were centrifuged at 14,000× g for 10 min at 4 °C and the supernatant samples were collected. To isolate the mitochondrial fraction, PK-15 cells were infected with PCV2. At 48 hpi, the cytosolic and mitochondrial fractions were isolated using a Mitochondria Isolation Kit (Beyotime) according to the manufacturer’s recommendations. The protein concentration was determined using a Bradford assay kit (Beyotime).
Equal amounts of protein samples were loaded and separated on 8%, 10%, or 15% SDS–PAGE gels. The samples were transferred to polyvinylidene fluoride (PVDF) membranes (Merck Millipore, Darmstadt, Germany). After blocking for 1 h with PBS with 0.05% Tween-20 (PBST) containing 5% nonfat milk power at 37 °C, the membranes were incubated with primary antibodies at 4 °C overnight. The membranes were then washed with PBST and incubated with secondary antibodies at 37 °C for 1 h. Images of the immunoblots were captured using a Gel 3100 chemiluminescent imaging system (Sagecreation, Beijing, China). The target protein blots were quantified using the NIH ImageJ software (National Institutes of Health, Germany).

Mitophagy Detection Kit® (Dojindo, Kumamoto, Japan) containing Mtphagy Dye® and Lyso Dye® was used to detect the mitophagy induced by the PCV2 infection. PK-15 cells were incubated in 24-well plates and stained with 100 nM Mtphagy Dye for 15 min in the dark before washing with DMEM (HyClone). The cells were then infected with PCV2 (MOI = 1). At 48 hpi, the infected cells were washed with DMEM and Lyso Dye (1 μM) was added into each well. The plate was incubated for another 10 min, followed by washing with Hanks’ balanced salt solution (HBSS) (Beyotime). The cells were imaged on a confocal fluorescence microscope (IX81-FV1000, Olympus, Markham, ON, Canada). The fluorescence intensity was quantified using the NIH ImageJ software.
The colocalization of mitochondria autophagosomes was detected using confocal microscopy (IX81-FV1000). PK-15/EGFP-LC3 cells and MitoTracker™ Red CMXRos (ThermoFisher, Waltham, USA) labeling were used to examine the colocalization of mitochondria with GFP-LC3-positive autophagosomal structures.

Transmission electron microscopy (TEM) was used to assess the mitochondrial morphology. PK-15 cells were incubated in a six-well plate. Mock- and PCV2-infected cells (48 hpi) were prepared for the TEM. The specimens were first fixed with 2.5% glutaraldehyde in a phosphate buffer (PB) (0.1 M, pH 7.0) for 4–5 h, and then washed three times with PB for 15 min at each step. The specimens were postfixed with 1% OsO4 in PB for 1–2 h and washed three times with PB as per above. Dehydration of the specimens was conducted using a graded series of ethanol (30%, 50%, 70%, 80%, 90%, 95%, and 100%) for about 15 to 20 min at each step, and then using absolute acetone for 20 min. For embedding and ultrathin sectioning, specimens were placed in Eppendorf tubes containing Spurr resin and heated at 70 °C for at least 9 h. The LEICA EM UC7 ultratome (Wetzlar, Germany) was used to prepare the sections, which were stained with uranyl acetate and alkaline lead citrate for 5 to 10 min, and then observed using the Hitachi Model H-7650 TEM (Tokyo, Japan).

PK-15 cells were cultured in Petri dishes (10 mm in diameter) (Xinyou, Hangzhou, China) and infected with PCV2 at MOI = 1. Mock-infected cells were included as a control. At 48 hpi, MitoTracker™ Red CMXRos (ThermoFisher) was used to stain the mitochondria for 15 min at 37 °C. The cells were fixed with 4% paraformaldehyde for 30 min, washed twice with HBSS, and then permeabilized with HBSS containing 0.25% TritonX-100 for 15 min. The cells were then probed with the Anti-p-Drp1 antibody. Images were visualized under a 60× oil objective on a confocal microscope (IX81-FV1000, Olympus). The quantification of the cell fluorescence intensity was conducted with the NIH ImageJ software.

For the determination of the apoptotic rate, an Annexin V-FITC Apoptosis Detection Kit (Vazyme, Nanjing, China) was used for the flow cytometry. After 48 hpi, PK-15 cells were trypsinized and collected in HBSS, where 400 μL 1× binding buffer was added to re-suspended cells for each sample. The cells were stained with 5 μL Annexin V-FITC and 5 μL propidium iodide (PI) for 10 min in the dark at room temperature. At least 1 × 104 cells in each sample were measured to identify the apoptotic cell populations.
To detect whether virus infection activated caspase 3 and caspase 9, the Caspase 3/9 Activity Assay Kit (Beyotime) was used. The kit contains Ac-DEHD-pNA and Ac-LEHD-pNA as caspase 3 and 9 specific substrates, respectively. The active caspases could cleave substrates to become fluorescent (excitation at 485 nm and emission at 530 nm).

The results are expressed as mean ± SEM from at least three independent experiments. Statistical comparisons were made using one-way analysis of variance (ANOVA) followed by a least significant difference (LSD) post hoc test. Differences between groups were considered significant if * p < 0.05 and highly significant if ** p < 0.01.

3.1. PCV2 Induced Mitophagy with the Accumulation of Mitophagosomes

Mitochondrial function is accompanied by ROS generation. Excessive ROS generated by mitochondrial dysfunction might induce mitophagy, a mechanism used to eliminate the damaged organelles [28]. PCV2 infection is known to elevate the ROS load [4,23,29]. ROS-scavenging NAC was employed to treat the PCV2-infected cells to investigate the effect of PCV2-induced ROS on mitophagosome formation shown as colocalization of the GFP-LC3 puncta with mitochondria. Figure 5 reveals that NAC treatment significantly reduced mitophagosome formation in PCV2-infected cells (** p < 0.01).
To further address how ROS were involved in the Drp1 phosphorylation and PCV2-induced mitophagy, we examined the changes of PINK1, Parkin, LC3II, Drp1, and p-Drp1 in whole lysates of cells infected with PCV2 with or without NAC treatment. We observed that PCV2 infection led not only to autophagy, shown as a marked increase of the LC3II/LC3I ratio, but also to the elevated expression of PINK1 and Parkin in PK-15 cells, as well as increased Drp1 phosphorylation, which are indicative of mitophagic responses. All these changes due to PCV2 infection were reversed using an NAC treatment (Figure 6A–D) (* p < 0.05 or ** p < 0.01). PCV2 replication was also inhibited using an NAC treatment, which is shown as a decreased PCV2 Cap expression and a reduced number of PCV2 infected cells (Figure 6D,E). Further analysis revealed that increased Parkin accumulation in the mitochondrial fraction of PCV2 infected cells could be blocked using an NAC treatment (* p < 0.05) (Figure 6F,G). Thus, we provide clear evidence that there was a causal link between mitophagy and excessive ROS production during PCV2 infection, and that ROS might function as an upstream signal for the activation of Drp1 phosphorylation with subsequent mitochondrial fission and mitophagy.

Mitochondrial dynamics is regulated by Drp1, a key protein involved in mitochondrial fission [30], and integrally linked to apoptosis [31]. We showed that PCV2 could induce mitochondrial apoptosis [4]. To gain insight into the role of Drp1 in PCV2-induced mitophagy and mitochondrial apoptosis, we tested whether the specific suppression of Drp1 with lentivirus-mediated shRNA (shDrp1) or chemical treatment with Mdivi-1 would affect the mitophagic and apoptotic responses. The chemical inhibition of Drp1 or RNA silencing with shDrp1 could effectively alleviate mitochondrial fragmentation caused by PCV2 infection (Figure 7A). To confirm the relationship between Drp1 and mitophagy, Western blotting was used to examine the effects of Drp1 inhibition on the expression of key molecules involved in mitophagy and apoptosis. We found that the inhibition of Drp1 expression resulted in decreased PINK1 and caspase 3 cleavage (Figure 7B,C), as well as a diminished Parkin accumulation and reduced LC3II/I ratio in the mitochondrial fraction (Figure 7D,E)(* p < 0.05 compared with those of the cells infected with PCV2 only).
The down-regulation of Drp1 by Mdivi-1 treatment or shDrp1 significantly decreased ROS and rescued MMP in PCV2-infected cells compared with PCV2-infected but untreated cells (* p < 0.05) (Figure 8A,B). Drp1 suppression inhibited the loss of mitochondrial mass in cells infected by PCV2 (* p < 0.05, ** p < 0.01 vs. control cells) (Figure 8C). Treatment with either Mdivi-1 or shDrp1 could alleviate apoptotic responses in PK-15 cells, which was shown as a decreased apoptotic rate (* p < 0.05) (Figure 8D) and reduced activities of caspases 3 and 9 that were closely related to mitochondrial apoptosis (* p < 0.05) (Figure 8E,F). These findings indicate that Drp1 might function as an upstream molecule and cooperate with ROS to regulate the PINK1/Parkin pathway, as well as mitophagic and mitochondrial apoptotic responses.

This work is part of the project sponsored by the National Natural Science Foundation of China (31272534).

The authors declare no conflicts of interest, and all the authors approved this manuscript for publication. 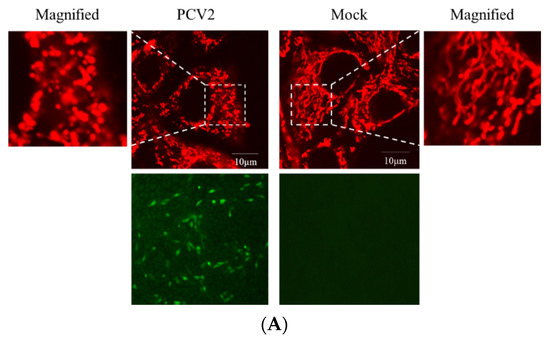 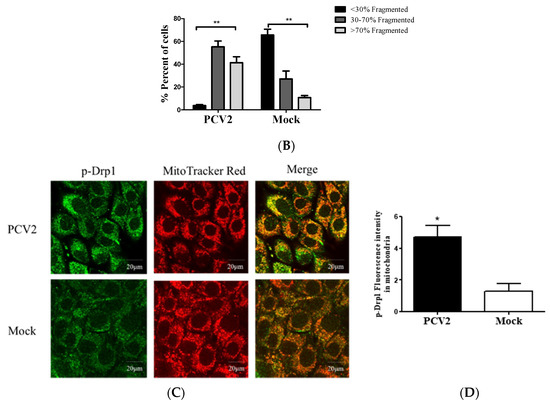 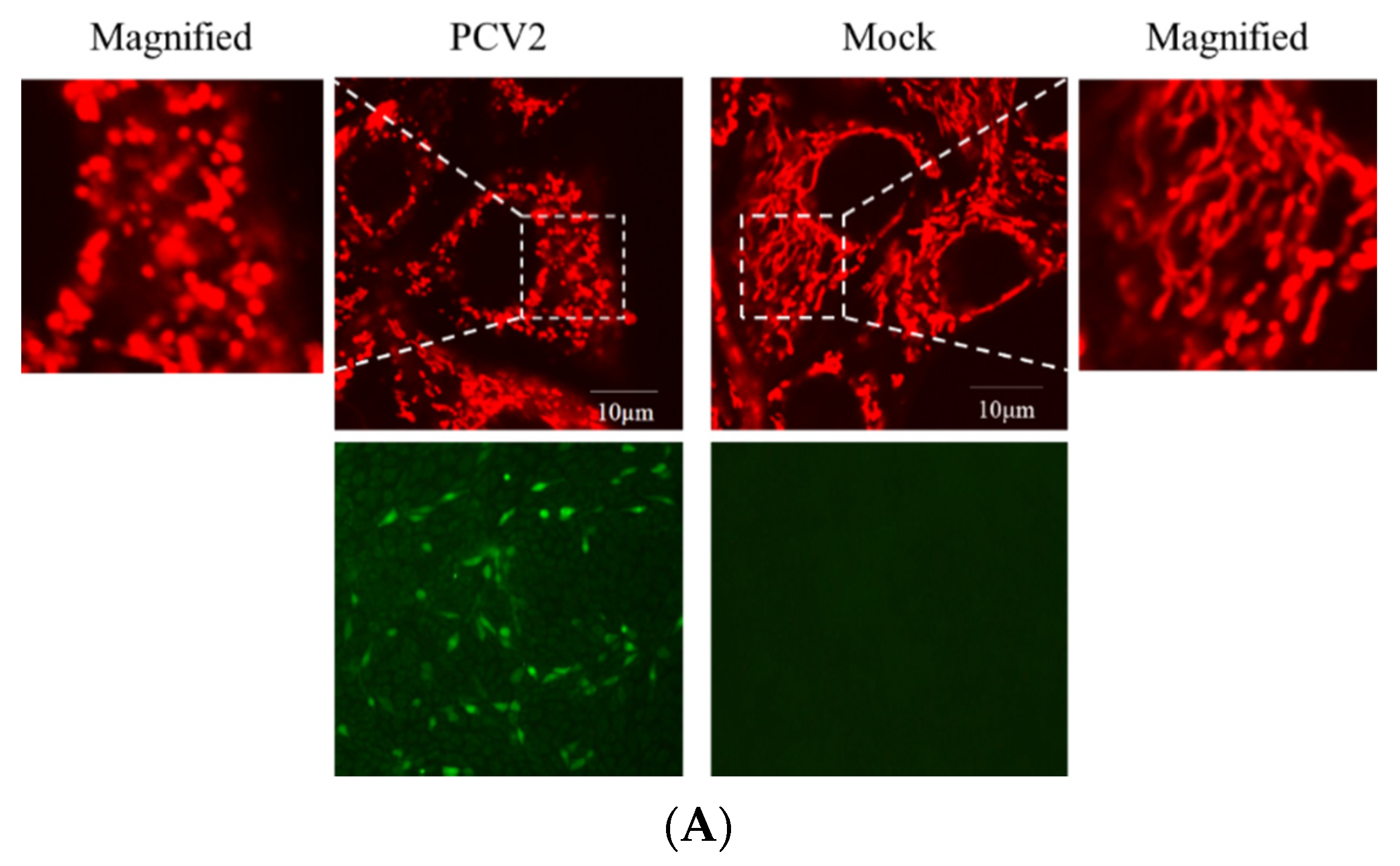 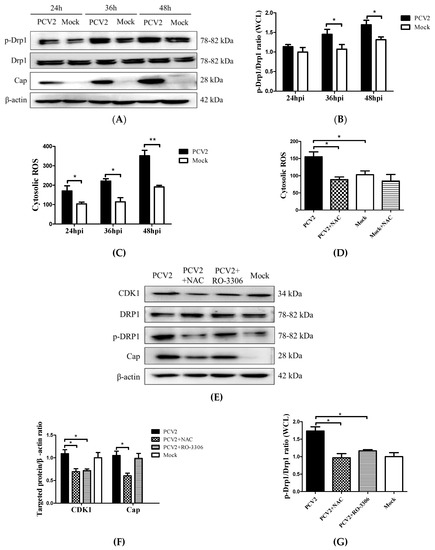 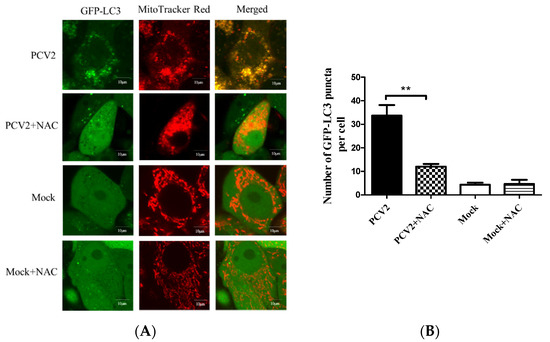 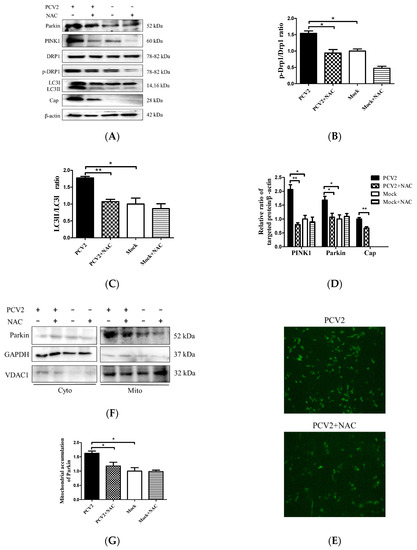 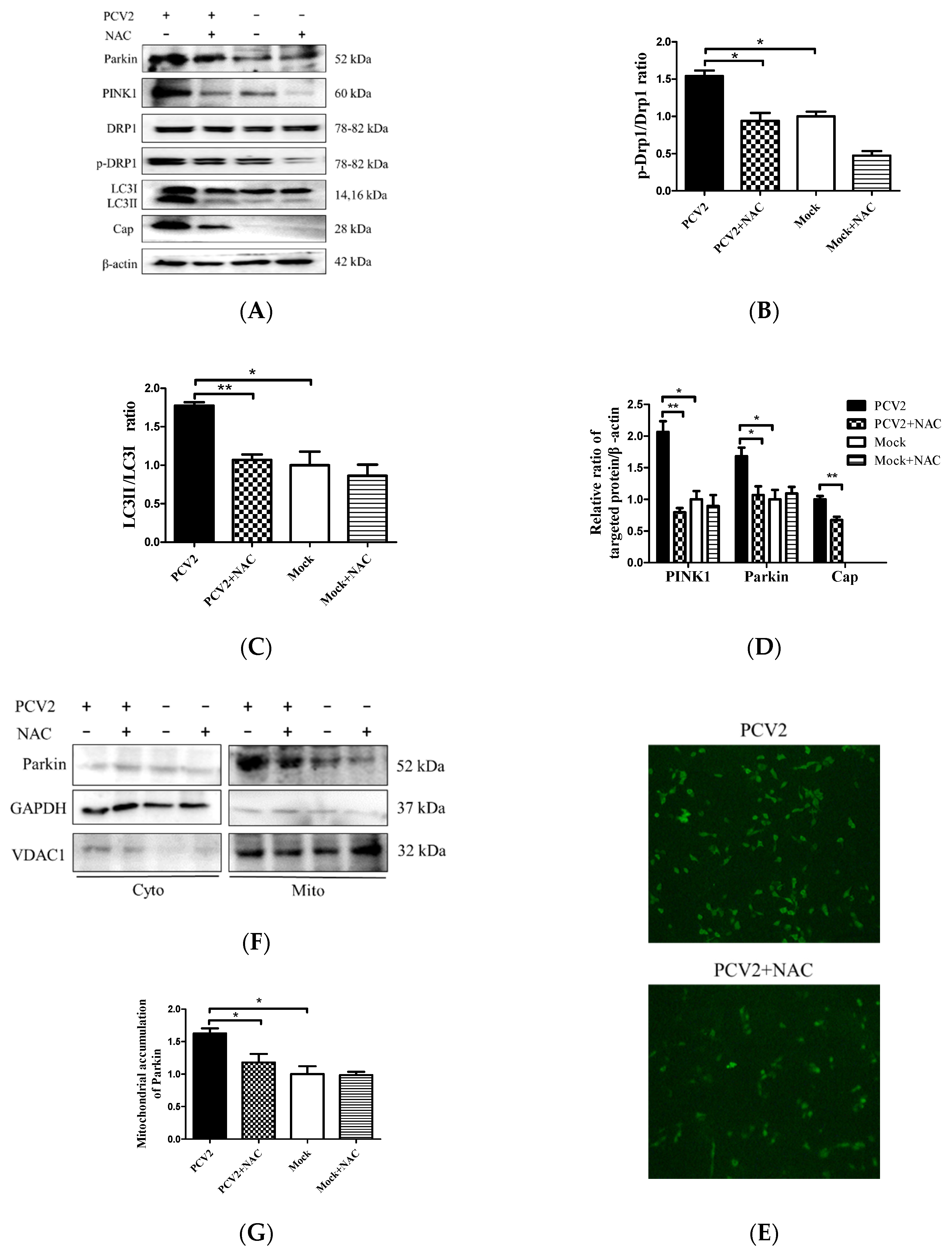 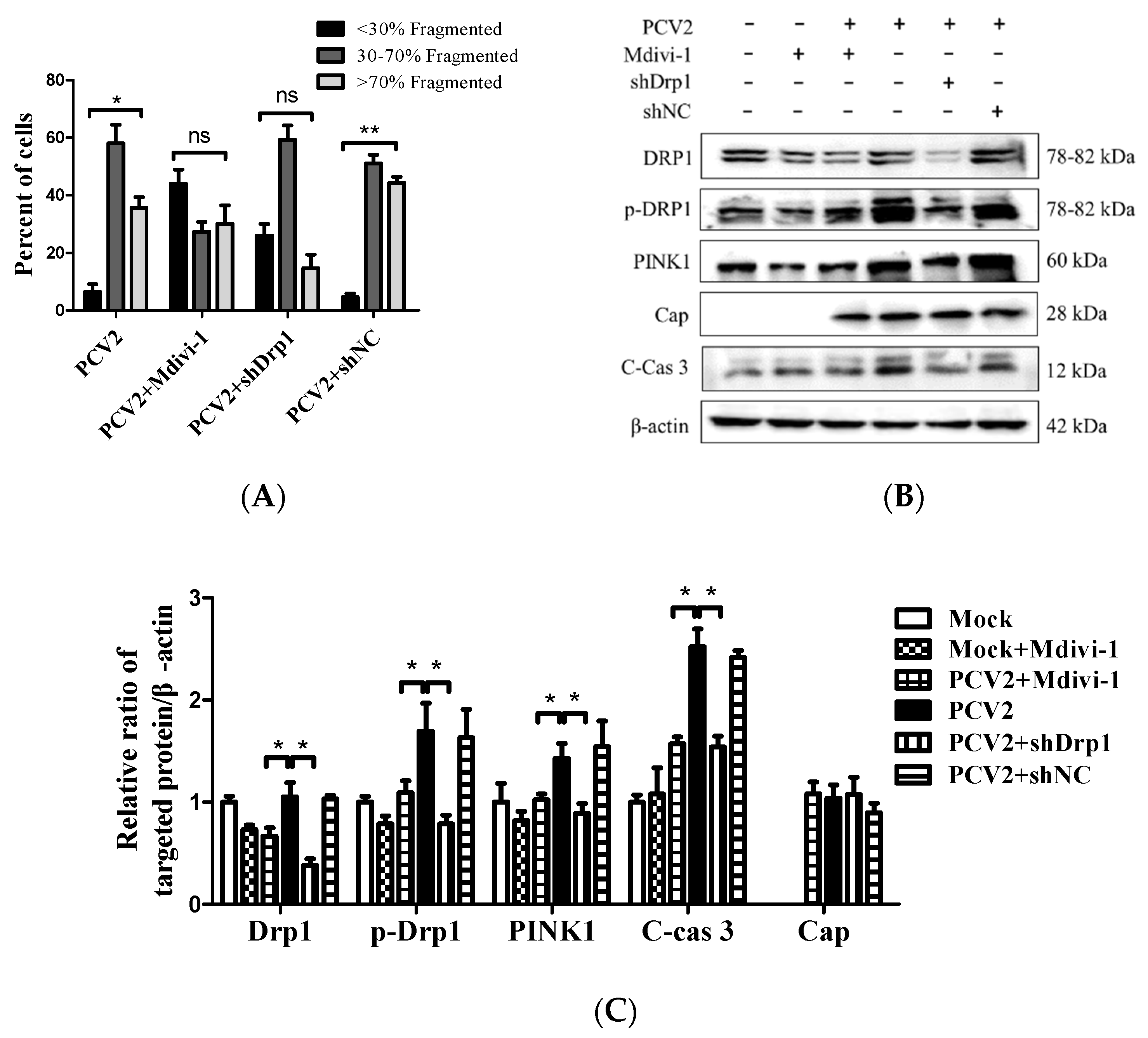 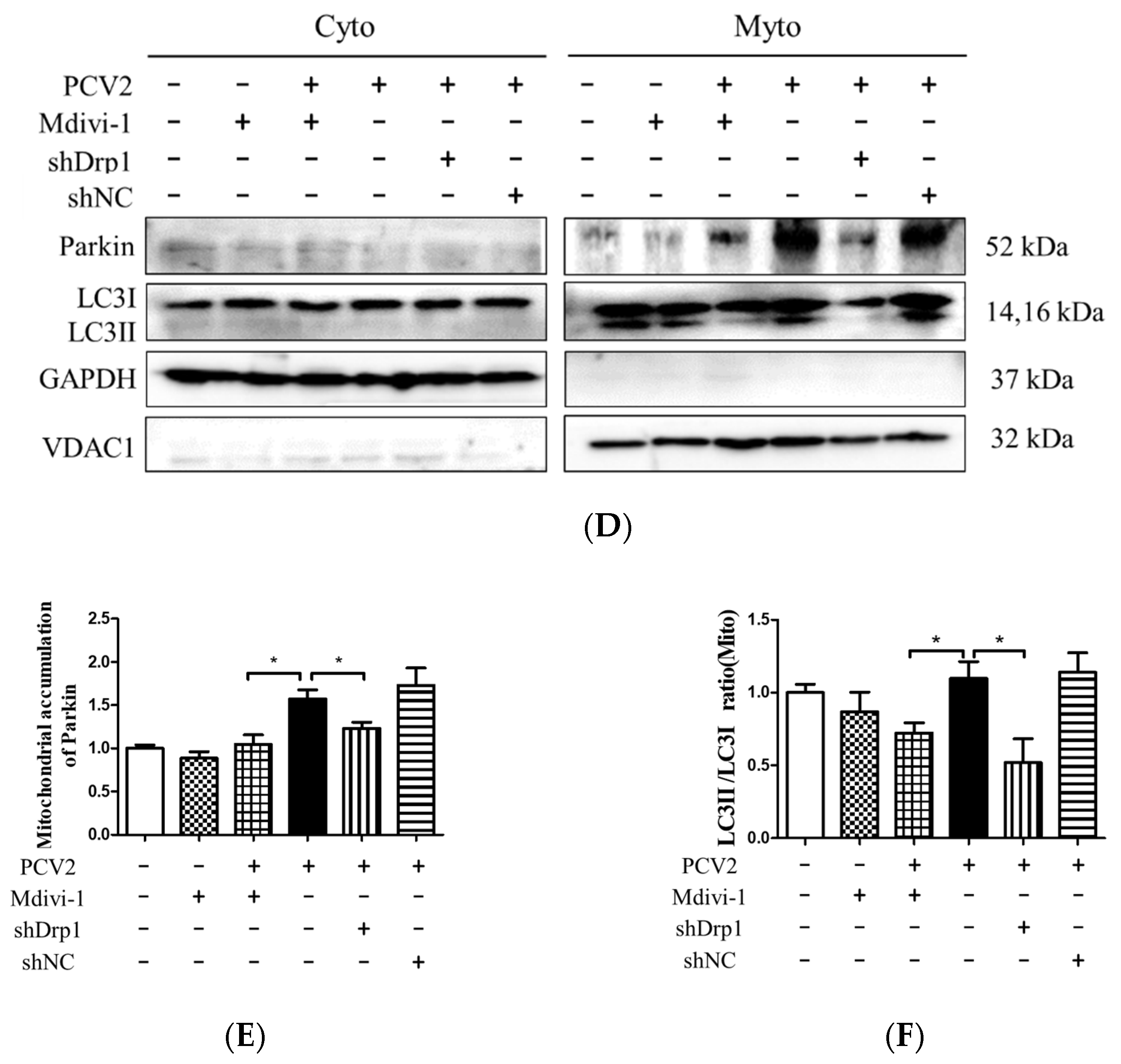 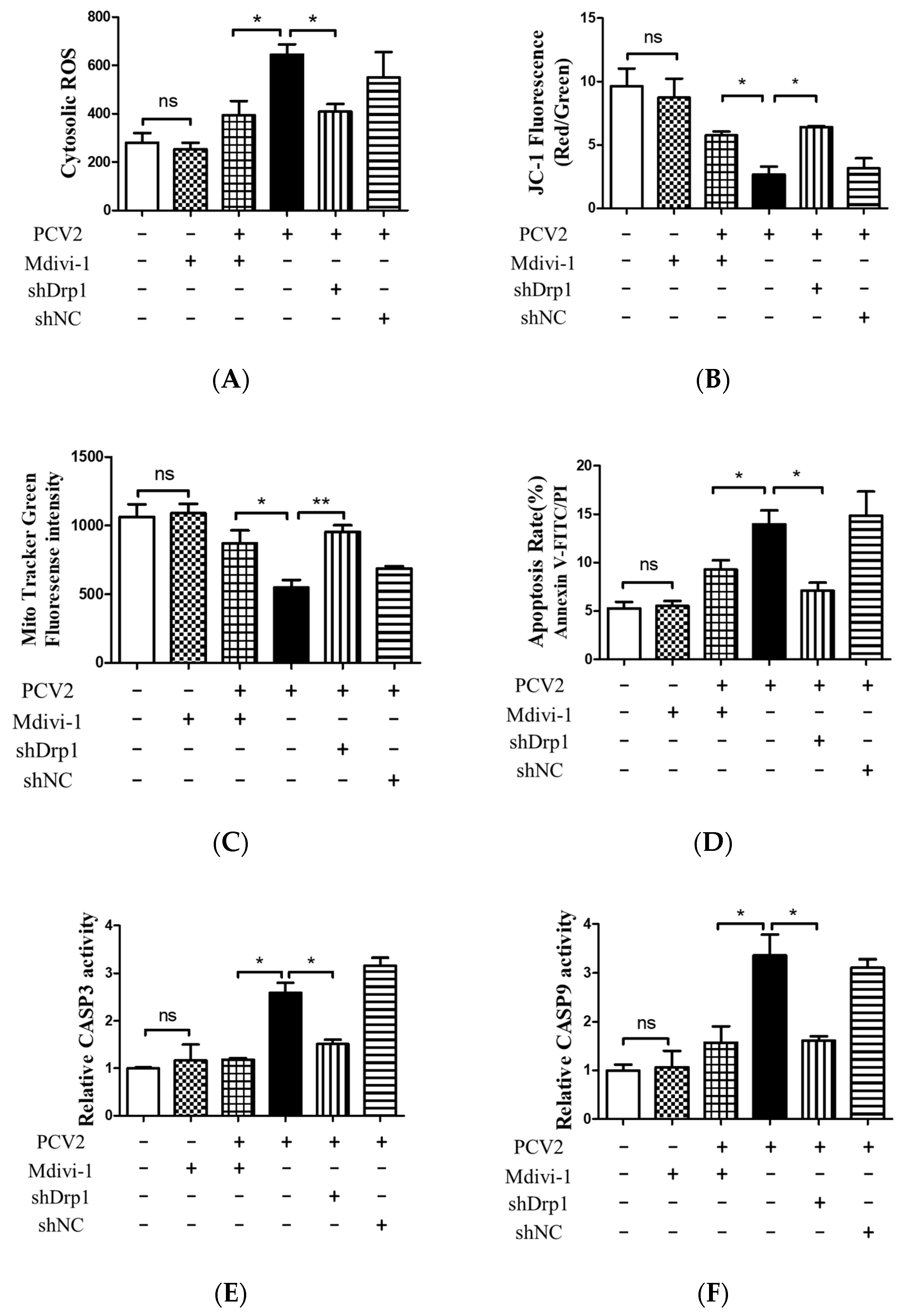 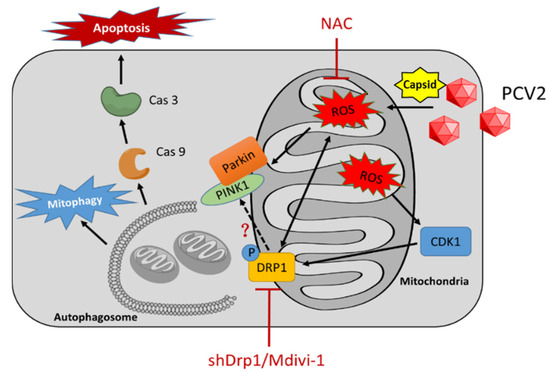