A Lectin Disrupts Vector Transmission of a Grapevine Ampelovirus

The CTV isolates T30, and T68-1, the infectious clone T36, and the series of hybrids engineered in this work (35s200, 35s230-37, 35T8) were maintained in one-year-old C. macrophylla plants under controlled greenhouse conditions (23 ± 1 °C, 65 ± 5% RH (relative humidity), and a photoperiod of 16/8 h (day/night)). These plants were roughly two feet tall, with a single stem, and used as a source of virus for later graft inoculations of CTV seedlings. The brown citrus aphid (A. citricidus) was used for the transmission of CTV. Healthy A. citricidus were reared on uninfected healthy Choisya ternata plants in insect-proof cages (61 × 61 × 92 cm). Aphid colonies and citrus plants were located at the Citrus Research and Education Center, UF-IFAS, Lake Alfred, FL.

Three CTV hybrid infectious clones were constructed by using the CTV-T36 full-length (GenBank accession # AY170468) infectious clone plasmid [24,25] as a cloning vector backbone. Fragments produced by reverse transcription PCR (RT-PCR) from T30 (GenBank accession #AF260651.1) [26], and the T68 isolates (GenBank accession #JQ965169.1) of CTV were used for substitution into the CTV-T36 cloning vector. A list of primers used in the construction of the CTV infectious clones is shown in Table 1.
Initially, we localized the unique restriction sites (ApaI, AscI, PspXI, Bsu36I, XmaI, and PmeI) within the genome of CTV strains to be able to exchange fragments between the different strains. After the construction of CTV chimeric sequences, the new constructs were confirmed by Sanger sequencing (Macrogen, Rockville, MD, USA).

Total RNA extraction was performed using Trizol according to the manufacturer’s recommendation. The AffinityScript One-Step RT-PCR Kit (Bio-Rad, Hercules, CA) was used as a complete system for single-tube RT-PCR to create the fragments that were used for the replacement in the CTV-T36 infectious clone. The complementary DNA (cDNA) was amplified in the same tube by Herculase II fusion DNA polymerase. Complementary DNA synthesis and PCR took place during an uninterrupted thermal-cycling program. cDNA synthesis occurred at 50 °C for 50 min immediately followed by an RT heat inactivation step at 94 °C and then 40 thermal cycles for PCR amplification. The amplification cycle consisted of a denaturation step at 94 °C for 30 s, a template primer annealing step at 58 °C for 30 s, and an extension step at 68 °C for 1 min if the target was bigger than 1 kb, or 72 °C for targets smaller than 1 kb.

The T30 infectious hybrid clone was constructed in four ligation steps through replacement of four fragments of the T30 isolate and exchanging fragments into an infectious clone of T36-based vector 35s201I, which is a chimeric hybrid of a VT-T36 infectious cDNA clone from our lab inventory (Figure 1A), by swapping from the 3′-end toward the 5′-end. First, an amplified cDNA fragment comprised of nucleotides 8083 to 11828 was amplified using forward primer c2459 and reverse primer c2281.
The PCR product was digested with PmeI and XmaI and ligated into the CTV-T36 infectious plasmid vector 35s201I digested with the same restriction enzymes (Figure 1B). The second fragment between nucleotides 4431 and 8083 using forward (c2356) and reverse (c2358) was digested with Bsu36I and XmaI and then ligated into the similarly digested CTV hybrid clone from the previous step (Figure 1C). Then, the PCR product amplified between nucleotides 182 and 4431 using forward (c2268) and reverse (c2357) was digested by AscI and Bsu36I, and ligated into the CTV hybrid clone from the second step, which was digested with the same restriction enzymes (Figure 1D). The final CTV hybrid clone was constructed by inserting an amplified cDNA fragment produced by RT-PCR using forward (c2267) and forward (c1882) primers. The PCR product amplified between the AscI restriction enzyme site in the nucleotide ApaI restriction site in the 35s promoter of CaMV (c1882). The previous hybrid clone from the third step was digested with ApaI and AscI restriction enzymes and was ligated with the amplified fragment. The final infectious clone containing T30 ORF1a and 1b in addition to p33, and the intergenic region upstream of p6 was named 35s230-37 (Figure 1E).

We started with CTV-T36 infectious plasmid vector 35s193 (containing the VT 5′-end sequence plus downstream sequences up to the AscI restriction enzyme site (nt 182) and L1 and L2 leader proteases of T30) as a backbone clone (Figure 2A).
The T36 infectious hybrid clone (35s200) was constructed by replacement of three fragments of the T68-1 isolate, produced by one-step RT-PCR into the T36 infectious clone. First, helicase, RdRp, and p33 genes of the T68 strain of CTV (8078nt to 11827nt) were amplified with forward (c2299), and reverse (c2302). After digesting with XmaI and PmeI, the PCR product was ligated into similarly digested CTV-T36 infectious plasmid vector 35s193 (Figure 2B). The second step was to replace the region between leader protease LP2 and helicase. This region between nucleotides 2026 and 8078 was amplified using forward (c2296) and reverse (c2300) restriction enzymes and ligated into a similarly digested CTV hybrid clone obtained from the first step (Figure 2C). Finally, a cDNA fragment was amplified with forward (c2267) and reverse (c2298), with the PspXI restriction enzyme site at nucleotide 2068. The amplified fragment and the hybrid clone from the second step were digested with ApaI and PspXI and then ligated. This final vector including T68 ORF1a and 1b was named 35s200 (Figure 2D).

To determine if the P33 protein is solely responsible for aphid transmission of CTV, we used the 35s200 infectious cDNA clone as a template to amplify p33 gene of T68 strain (Figure 3A), using forward primer c2475 containing a StuI restriction site and reverse primer c2470 having a PacI restriction enzyme site.
The PCR product was used for replacement between the StuI–PacI restriction enzyme sites in the infectious CTV clone 35s246 that has the gfp at this position (from our lab inventory) (Figure 3B). This CTV-T68/T36 infectious hybrid clone was named 35sT8, and it included only the P33 gene from the T68 isolate of CTV (Figure 3C).

The cell line of Agrobacterium tumefaciens strain EHA 105 was used for the transformation of CTV constructs produced in this study. Agrobacterium-mediated inoculation of CTV constructs into N. benthamiana was performed as previously described, with minor modifications [27]. To promote the CTV infection in N. benthamiana, different silencing suppressors, including p22 [28], p19 [27], p24 [29] and P1/HC-Pro [30], were transformed into the EHA 105 cell line and coinfiltrated with the CTV clones [31,32].

After 8–9 weeks post-infiltration into N. benthamiana, the systemic infection of CTV in N. benthamiana leaves was confirmed using ELISA [33,34]. CTV virion isolations for bark flap inoculation of C. macrophylla were performed as previously described [27,35] with an additional centrifugation step. Seedlings 12–18 months old and approximately 24” in height with stems of pencil thickness were selected for bark flap inoculation [35]. Citrus plants were grown under the greenhouse conditions described earlier.

Double antibody sandwich (DAS) ELISA was performed using rabbit polyclonal antibodies as described previously [33]. A new flush of citrus plants or young bark tissue was collected (around 0.25 g). Extracts were prepared by homogenizing the tissue in 5.0 mL of phosphate-buffered saline with a pH of 7.8, containing 1% Tween-20 (PBS-Tween). Rabbit polyclonal antibody (1 μg/mL) was used for coating the ELISA plate. The CTV detection antibody and enzyme conjugate (A + B) was used at 1:750K dilution (Agdia, Elkhart, IN, USA). Samples were replicated twice per plate. Reactions were read spectrophotometrically at 405 nm and filtered on an ELx800 Universal Microplate Plate Reader (Bio-Tek Instrument Inc., Winooski, VT, USA) after 30 and 60 min.

The apterous form of A. citricidus was used for the transmission studies. Aphids were maintained on virus-free Choisya ternata plants, then fed on CTV graft-inoculated C. macrophylla for a virus-acquisition access period of 24 h. Groups of aphids were placed on virus-free Mexican lime (C. aurantiifolia) seedlings (5–7 aphid/plant). Replicates were up to 300 per treatment. The aphids were placed on the seedlings for an inoculation access period of 24 h. After feeding, the plants were sprayed with aphicide (Malathion) to kill the aphids. Then, the plants were transferred to the insect-free greenhouse and were maintained at ambient temperatures for up to four months. Plants were checked for transmission of CTV by ELISA at eight weeks after inoculation. The transmission efficiency was defined as the percentage of infected plants. The proportions of infected to healthy plants were compared among the treatments, using a one-by-six contingency table analysis.

As many genes are involved in replication and virion assembly, it was necessary to ensure that changes in the genome of T36 infectious clone did not affect virus replication within the plant. For that reason, donor plants used for aphid transmission experiments (5 plants/treatment) were tested for CTV by ELISA. Table 2 shows that similar ELISA results were obtained for plants used in CTV transmission experiments. Therefore, we excluded the possibility of a direct correlation between the aphid transmission rate and the level of virus titer in donor plants.

3.2. Replacement of 5′-End Terminus Genes (lp1 to p33) of the Poorly Transmitted Isolate T36 with those from the Highly Transmissible Isolate T68-1 Significantly Increases the Transmission Rate by A. citricidus 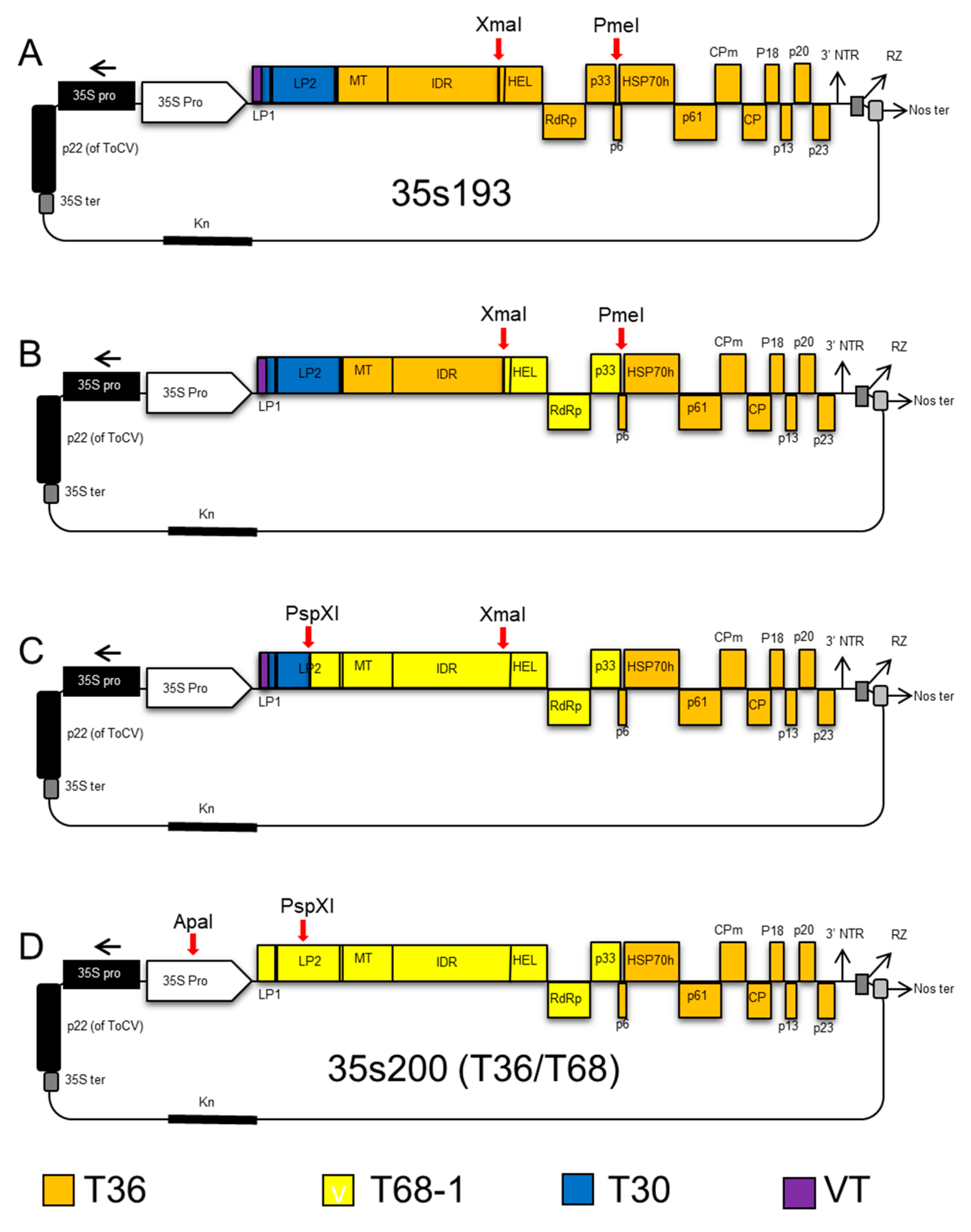 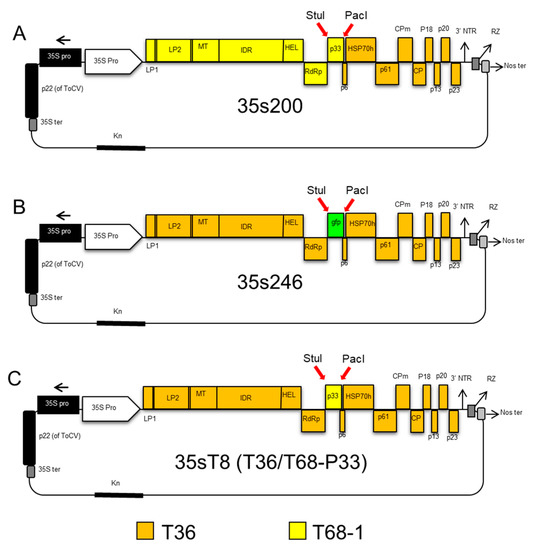