When Arabidopsis thaliana ecotype Col-0 was inoculated with a series of reassortant viruses created by exchanging viral genomic RNAs between two strains of cucumber mosaic virus (CMV), CMV(Y), and CMV(H), cell death developed in the leaves inoculated with reassortant CMV carrying CMV(H) RNA1 encoding 1a protein, but not in noninoculated upper leaves. In general, cell death in virus-infected plants is a critical event for virus survival because virus multiplication is completely dependent on host cell metabolism. However, interestingly, this observed cell death did not affect either virus multiplication in the inoculated leaves or systemic spread to noninoculated upper leaves. Furthermore, the global gene expression pattern of the reassortant CMV-inoculated leaves undergoing cell death was clearly different from that in hypersensitive response (HR) cell death, which is coupled with resistance to CMV. These results indicated that the observed cell death does not appear to be HR cell death but rather necrotic cell death unrelated to CMV resistance. Interestingly, induction of this necrotic cell death depended on single amino acid substitutions in the N-terminal region surrounding the methyltransferase domain of the 1a protein. Thus, development of necrotic cell death might not be induced by non-specific damage as a result of virus multiplication, but by a virus protein-associated mechanism. The finding of CMV 1a protein-mediated induction of necrotic cell death in A. thaliana, which is not associated with virus resistance and HR cell death, has the potential to provide a new pathosystem to study the role of cell death in virus–host plant interactions. View Full-Text
Keywords: cell death; cucumber mosaic virus; hypersensitive response; methyltransferase domain; necrosis cell death; cucumber mosaic virus; hypersensitive response; methyltransferase domain; necrosis
►▼ Show Figures 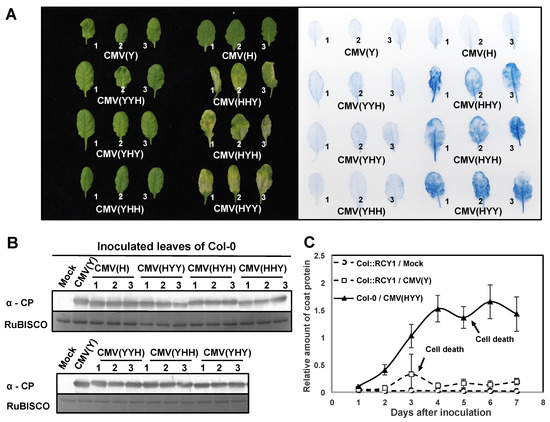