The success of oral infection by viruses depends on their capacity to overcome the gut epithelial barrier of their host to crossing over apical, mucous extracellular matrices. As orally transmitted viruses, densoviruses, are also challenged by the complexity of the insect gut barriers, more specifically by the chitinous peritrophic matrix, that lines and protects the midgut epithelium; how capsids stick to and cross these barriers to reach their final cell destination where replication goes has been poorly studied in insects. Here, we analyzed the early interaction of the Junonia coenia densovirus (JcDV) with the midgut barriers of caterpillars from the pest Spodoptera frugiperda. Using combination of imaging, biochemical, proteomic and transcriptomic analyses, we examined in vitro, ex vivo and in vivo the early interaction of the capsids with the peritrophic matrix and the consequence of early oral infection on the overall gut function. We show that the JcDV particle rapidly adheres to the peritrophic matrix through interaction with different glycans including chitin and glycoproteins, and that these interactions are necessary for oral infection. Proteomic analyses of JcDV binding proteins of the peritrophic matrix revealed mucins and non-mucins proteins including enzymes already known to act as receptors for several insect pathogens. In addition, we show that JcDV early infection results in an arrest of N-Acetylglucosamine secretion and a disruption in the integrity of the peritrophic matrix, which may help viral particles to pass through. Finally, JcDV early infection induces changes in midgut genes expression favoring an increased metabolism including an increased translational activity. These dysregulations probably participate to the overall dysfunction of the gut barrier in the early steps of viral pathogenesis. A better understanding of early steps of densovirus infection process is crucial to build biocontrol strategies against major insect pests. View Full-Text
Keywords: insect; Lepidoptera; insect parvovirus; chitin; peritrophins; glycans; biocontrol insect; Lepidoptera; insect parvovirus; chitin; peritrophins; glycans; biocontrol
►▼ Show Figures 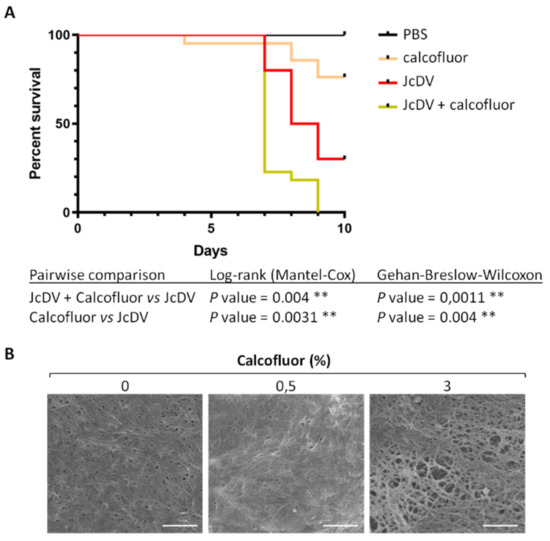