Specificity of Morbillivirus Hemagglutinins to Recognize SLAM of Different Species

Measles elimination has been identified as a public health priority in Europe for a long time but has not yet been achieved. The World Health Organization (WHO) recommends identification of susceptible sub-populations to target supplementary immunization activities. We used three different sources of information: retrospective samples investigated for measles IgG between 1997 and 2016, vaccine coverage data from the existing electronic registry for birth cohorts 2015 to 1999, and surveillance data from 2009 until 20 July 2019. We calculated susceptibility by birth cohort using seroprevalence data, adjusting vaccine coverage data with reported effectiveness (93% for the first and 97% for the second dose, respectively), and compared it with measles incidence data, aggregated by birth cohorts and districts. Susceptibility levels for persons 10–41 years (birth cohorts 2007–1976) were 10.4% and thus far above the recommended values of WHO (5%). Older birth cohorts were sufficiently protected. Districts with the highest susceptibility estimates corresponded with districts with the highest incidence rates. Birth cohorts with susceptibility levels > 10% showed a 4.7 increased relative risk of having had more than one measles case. We conclude that retrospective serosurveys are a cheap and useful approach in identifying susceptible sub-populations, especially for older birth cohorts whose coverage data remain scarce.
Keywords: measles; serosurvey; vaccine coverage; surveillance measles; serosurvey; vaccine coverage; surveillance

Measles elimination in the WHO Region for Europe was already planned for 2010 but has not yet been achieved [1,2]. The number of reported measles cases in the region increased 15 times between 2016 (the year with the lowest number of cases recorded) and 2018 [3]. Several issues have contributed to this phenomenon, one of them being vaccine hesitancy- a factor identified as one of the 10 key health threats in 2019 [4]. WHO recommends to diagnose the determinants of insufficient vaccine uptake and to tailor vaccination strategies [5]. Susceptibility levels below 5% in children 10 years and older, below 10% in children age five to nine years, and below 15% in children 24 months to 4 years are needed to eliminate measles [6].
In Austria, mandatory reporting of suspected measles cases has been implemented in 2006 [7]. The first measles containing vaccines (MCV) were licensed in 1963 in the US [8] and, since 2001, more than 2 billion doses were administered globally [9]. Bivalent (with mumps) MCV was recommended in 1974 in Austria, and the use of two doses of trivalent (measles–mumps–rubella) vaccine (MMR) was recommended in 1994 [10]. Since 1985, MCV was administered free of charge for children up to 15 years of age and since 2015 for all age groups [11].
Vaccine coverage is estimated by the administrative method in Austria. Since 2016, an agent-based simulation model has been implemented to better assess the number of susceptible persons to measles [12].
In Tyrol, one of Austria’s nine regions with 739,139 inhabitants in 2016 [13], the estimated coverage of the birth cohorts 2000 to 2009 was 88.2% with one dose and 76.5% with two doses of measles containing vaccine in 2012 [14]. Since 2000, an electronic vaccination registry has been fully implemented in Tyrol.
As of 2014, the Tyrolean government has required proof of two doses of MCV from all health care workers (HCW) in Tyrolean hospitals. Those who lack documented evidence of two doses of MMR are required to undergo serological testing. The same applied to all medical students.
The WHO provides guidance to seroprevalence surveys to better identify pockets of susceptible populations, and recommends their use if surveillance was only recently implemented and when coverage data are less reliable for older age groups [15]. Nevertheless, serosurveys as recommended by WHO are costly, logistically difficult to conduct, and require substantial time commitment as well as ethical approval. The objective of our work was to assess the usefulness of retrospective seroprevalence data and to describe the proportion of measles susceptible persons by birth cohort and district to better understand sub-populations that are most at risk. This knowledge may help to tailor awareness raising activities as mentioned in the national measles elimination plan [16].

In order to identify sub-populations that are most at risk for measles, we assessed the population immunity using three different sources of information: The results of an analysis of the MCV coverage data extracted from the regional electronic vaccination registry, the results from an ad-hoc retrospective serosurvey conducted in 2017 and the most recent surveillance data from the electronic reporting system EMS [17].

We used retrospective data of all persons who were investigated for measles IgG antibodies between 1997 and 2016 in the Division of Virology at the Medical University of Innsbruck (Sheet S1). This laboratory received the majority of blood samples for measles serology testing in Tyrol which were approximately 1300 samples per year. Testing was usually requested for unspecific exanthema with or without fever. The information available at the laboratory did neither include detailed clinical information nor information about the vaccination status. IgM results were not considered in our analysis because detection of recent infection was not our primary objective. Samples were classified as positive/negative according to cut-off values described by the respective manufacturer. Borderline values were excluded. Between 1 January 1997 and 19 November 2016 an enzyme immunoassay (ELISA; Enzygnost® Anti-Measles Virus/IgG, Siemens, Marburg, Germany) and since then a chemoluminent immunoassay (CLIA, LIAISON® Measles IgG, Diasorin, Saluggia, (VC), Italy) were used. A sufficient number of parallel tests were conducted using both kits during the transition phase from ELISA to CLIA and results were comparable between the two kits. The last available laboratory result of each individual obtained between 1 January 1997 and 31 December 2016 was included. The exclusion criteria included the following: (a) place of residency outside Tyrol or not available, (b) date of birth before 1917 or not available, (c) inconclusive laboratory result, or (d) potential immunodeficiency. Potential immunodeficiency was defined as admittance to an intensive care unit (ICU) department or any other department, where patients were likely to be immunocompromised at the time of the sampling, such as oncology, transplant, or hematological wards. Furthermore, we excluded all HCWs and medical students tested for measles IgG from our analysis. Both groups who could not provide documented evidence of vaccination with two doses of MCV were requested by the regional authorities to confirm immunity by IgG testing.
The age of the participants was calculated as of 31 December 2016. Susceptibility to measles was assumed to be unchanged since the time of the last investigation.
We defined birth cohorts with susceptibility levels higher than 10% as high risk cohorts.
Seroprevalence data were extracted from the virological laboratory software in an anonymized way and analyzed using EpiinfoTM (Version 7.2.2.2, CDC Atlanta, GA, USA). We calculated the susceptibility by birth cohort and district, using the mid population data between 1996 and 2016 [13].
The study was approved by the ethical committee of the Medical University of Innsbruck under EK Nr: 1082/2017.

We extracted the MCV coverage data from the electronic vaccination registry of Tyrol in July 2018 for all available birth cohorts (1997–2013) in an aggregated format (Sheet S3). Data from 1999 were incomplete but were still included in the analysis. MCVs were trivalent MMR (measles–mumps–rubella) vaccines. We used the denominator data available from Statistik Austria from 2016 [13] to calculate coverage. We calculated the susceptibility levels using MCV coverage and assumed a vaccine effectiveness of 93% for the first and 97% for the second dose. Susceptible persons were stratified by number of MCV doses received and district of residency.

3.3. Reported Cases of Measles in Tyrol

The authors want to acknowledge Maureen Luvanda for editing the English. 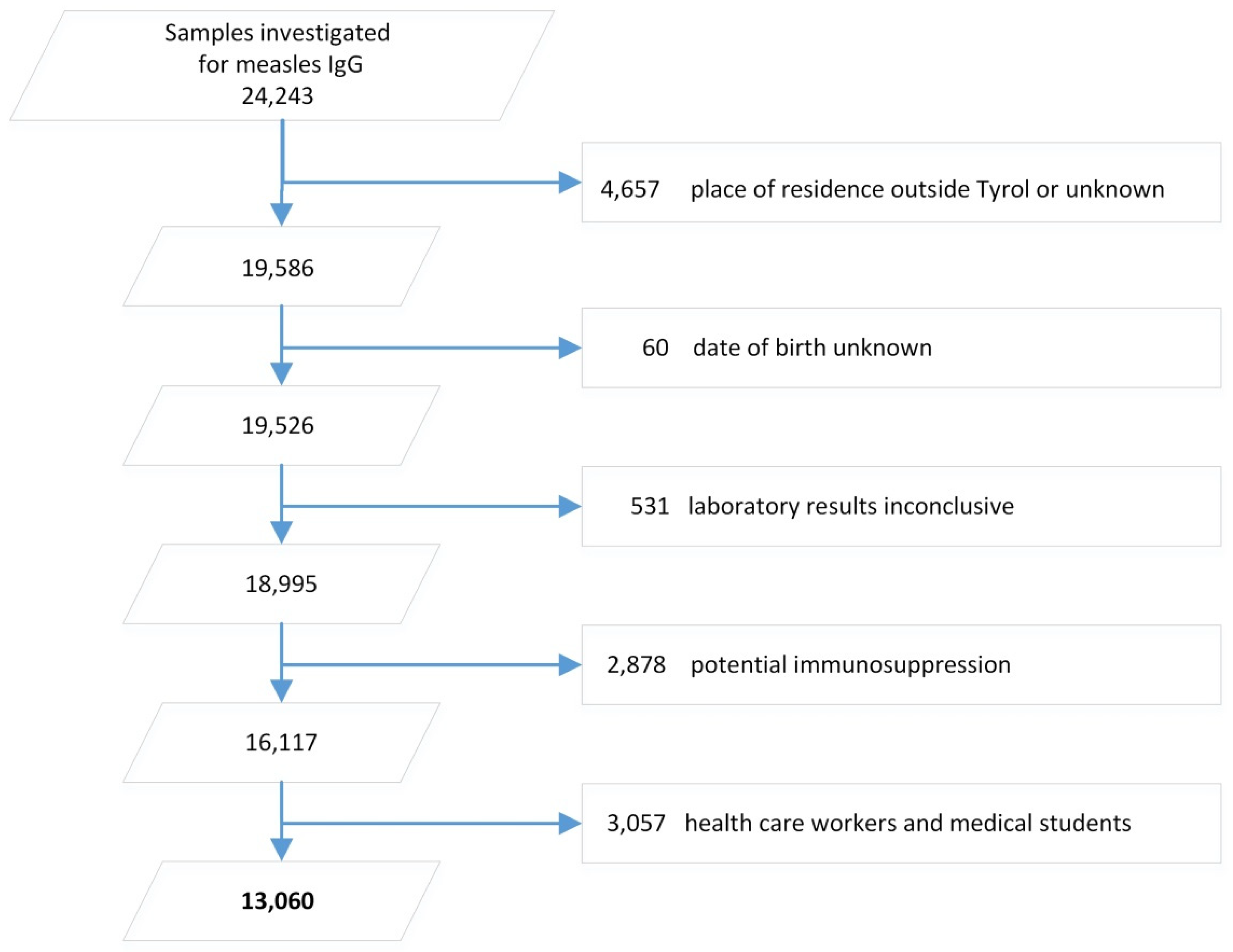