Exposure to Hantavirus is a Risk Factor Associated with Kidney Diseases in Sri Lanka: A Cross Sectional Study
Previous Article in Journal

A Review of Hantavirus Research in Indonesia: Prevalence in Humans and Rodents, and the Discovery of Serang Virus

Dengue and other common tropical infectious diseases of similar clinical presentation are endemic in Indonesia, which may lead to an underestimation of the prevalence of hantavirus (HTV) infection in the country. To better understand the current burden of HTV infection, this study aimed to both identify acute HTV infection among hospitalized patients with fever and to determine the overall seroprevalence of HTV. These results were further considered within the context of previously reported HTV infection in humans and animals in Indonesia by conducting a review of published literature. As part of an observational cohort study of acute febrile illness, this sub-study retrospectively analyzed blood specimens obtained during admission, during the 2–4-week convalescent period, and three months after admission. Convalescent specimens from patients with clinical signs and symptoms of HTV infection were first screened for HTV IgG. When positive, convalescent specimens and paired acute specimens were screened for HTV IgM, and paired acute specimens were tested for HTV by Reverse Transcription Polymerase Chain Reaction (RT-PCR). A literature review of HTV in Indonesia was conducted on manuscripts manually reviewed for relevance after identification from a search using the terms “hantavirus/Seoul virus” and “Indonesia”. From patients at eight hospitals in seven provincial capitals, HTV IgG seroprevalence was 11.6% (38/327), with the highest being in Denpasar (16.3%, 7/43) and the lowest being in Yogyakarta (3.4%, 1/31). Anti-HTV IgG was most prevalent in adults (13.5%, 33/244) and males (15.6%, 29/186). Acute HTV infections were identified in two subjects, both of whom had Seoul virus. In Indonesia, HTVs have been studied in humans and animals since 1984. Over the past 35 years, the reported seroprevalences in rodents ranged from 0% to 34%, and in humans from 0% to 13%. Fourteen acute infections have been reported, including one in a tourist returning to Germany, but only two have been confirmed by RT-PCR. Almost all rodent and human surveillance results demonstrated serological and molecular evidence of Seoul virus infection. However, in Semarang, anti-Puumala virus IgM has been detected in humans and Puumala RNA in one rodent. In Serang, a new virus named Serang virus was identified due to its differences from Seoul virus. In Maumere, HTV and Leptospira spp. were identified simultaneously in rodents. The burden of HTV infection in Indonesia is underestimated, and additional studies are needed to understand the true prevalence. Seroprevalence data reported here, previous observations of HTV co-infections in rodents, and the prevalence of rodent-borne bacterial infections in Indonesia suggest that the population may be routinely encountering HTVs. While Seoul virus appears to be the most prevalent HTV in the country, further studies are needed to understand which HTVs are circulating. View Full-Text
Keywords: hantavirus; prevalence; Indonesia; Serang virus; human; rodent hantavirus; prevalence; Indonesia; Serang virus; human; rodent
►▼ Show Figures 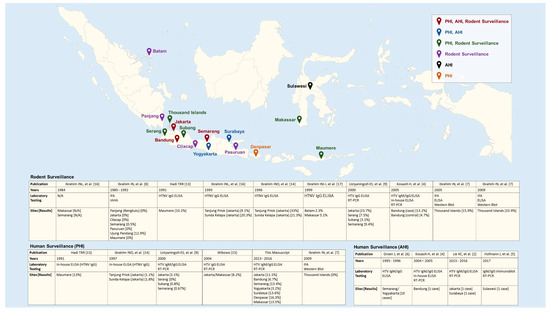