Aeromonas species are common pathogens of fish and some of them can opportunistically cause infectious diseases in humans. The overuse of antibiotics has led to the emergence of bacterial drug-resistance. To date, only 51 complete genome sequences of Aeromonas phages are available in GenBank. Here, we report the isolation of nine Aeromonas phages from a plateau lake in China. The protein cluster, dot plot and ANI analyses were performed on all 60 currently sequenced Aeromonas phage genomes and classified into nine clusters and thirteen singletons. Among the nine isolated phages, the DNA-packaging strategy of cluster 2L372D (including 2L372D, 2L372X, 4L372D, 4L372XY) is unknown, while the other five phages use the headful (P22/Sf6) DNA-packaging strategy. Notably, the isolated phages with larger genomes conservatively encode auxiliary metabolism genes, DNA replication and metabolism genes, while in smaller phage genomes, recombination-related genes were conserved. Finally, we propose a new classification scheme for Aeromonas phages. View Full-Text
Keywords: bacteriophage; Aeromonas; genome evolution; large terminase; auxiliary metabolism gene bacteriophage; Aeromonas; genome evolution; large terminase; auxiliary metabolism gene
►▼ Show Figures 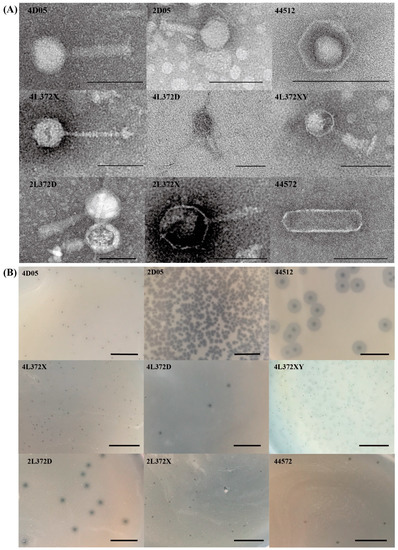