Culex torrentium: A Potent Vector for the Transmission of West Nile Virus in Central Europe

The continuous circulation of West Nile virus (WNV) in Central, South and East Europe and its recent detection in several dead birds and two horses in Germany highlights the need for information on WNV vector competence of mosquitoes from Central Europe. Therefore, three common Culex species (Culex pipiens biotype pipiens, Culex pipiens biotype molestus and Culex torrentium) from Germany were orally infected with WNV and kept at 18 °C, 21 °C, 24 °C or 27 °C for 14 or 21 days post infection (dpi). Thereafter viable WNV was present in the saliva in all tested taxa, but only at incubation temperatures of 24 °C or 27 °C and predominantly at the extended incubation period of 21 dpi. Highest transmission efficiency rates of 17 % (24 °C) and 24% (27 °C) were found for Cx. torrentium. Culex p. pipiens and Cx. p. molestus showed low transmission efficiencies with a maximum of only 3%. Consequently, temperatures above 21 °C support transmission of WNV, which matches the predominant distribution of human WNV cases around the Mediterranean Sea and in South-East Europe. Culex torrentium has been identified as a potent vector for WNV in Central and Northern Europe, which highlights the need for surveillance of mosquito-borne viruses north of the Alps. View Full-Text
Keywords: West Nile Virus; Culex torrentium; Arbovirus; Vector competence West Nile Virus; Culex torrentium; Arbovirus; Vector competence
►▼ Show Figures 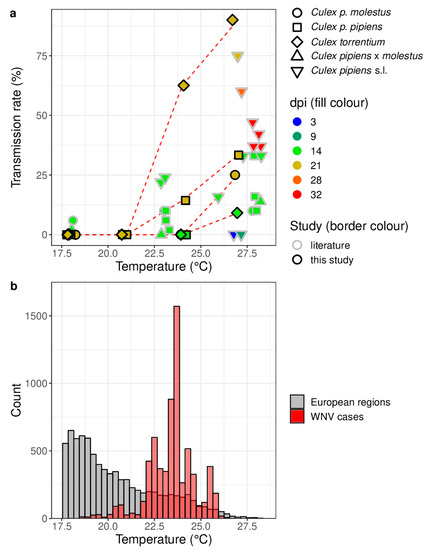