Presence of Antibodies against Sindbis Virus in the Israeli Population: A Nationwide Cross-Sectional Study
Previous Article in Journal

Phlebotomine sand flies are generalist vectors with significant implications for public health. They are able to transmit phleboviruses that cause sand fly fever, headaches, or meningitis in humans. Albania is a country in Southeast Europe with a typical Mediterranean climate which provides convenient conditions for the presence of sand flies. Hence, the circulation of phleboviruses, such as the Toscana and Balkan viruses, has been recently described in the country. We followed a virus discovery approach on sand fly samples collected in 2015 and 2016 in seven regions of Albania, with the aim to investigate and characterize potentially circulating phleboviruses in phlebotomine sand flies. A presumed novel phlebovirus was detected in a pool consisting of 24 Phlebotomus neglectus males. The virus was provisionally named the Drin virus after a river near the locality of Kukës, where the infected sand flies were trapped. Genetic and phylogenetic analysis revealed that the Drin virus is closely related to the Corfou (CFUV) virus, isolated in the 1980s from Phlebotomus major sand flies on the eponymous island of Greece, and may also be involved in human infections because of its similarity to the sand fly fever Sicilian virus. The latter justifies further studies to specifically address this concern. Together with recent findings, this study confirms that Albania and the Balkan peninsula are hot spots for phleboviruses. View Full-Text
Keywords: phlebovirus; sand fly-borne phleboviruses; sand fly fever; sand fly fever Sicilian (SFSV) virus; Albania phlebovirus; sand fly-borne phleboviruses; sand fly fever; sand fly fever Sicilian (SFSV) virus; Albania
►▼ Show Figures 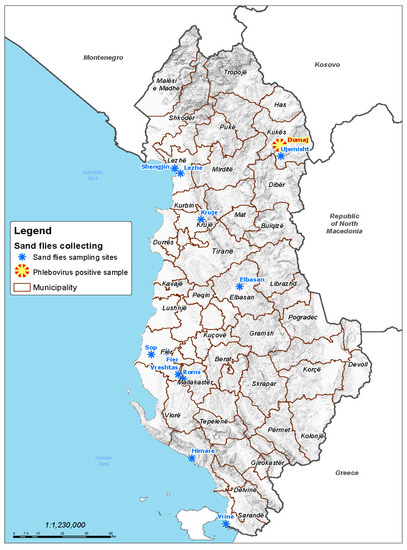