Priorities, Barriers, and Facilitators towards International Guidelines for the Delivery of Supportive Clinical Care during an Ebola Outbreak: A Cross-Sectional Survey
Next Article in Special Issue

Highly pathogenic avian influenza (HPAI) H5N1 and low pathogenic avian influenza (LPAI) H7N9 viruses pose a severe threat to public health through zoonotic infection, causing severe respiratory disease in humans. While HPAI H5N1 human infections have typically been reported in Asian countries, avian H7N9 human infections have been reported mainly in China. However, Canada reported a case of fatal human infection by the HPAI H5N1 virus in 2014, and two cases of human illness associated with avian H7N9 virus infection in 2015. While the genomes of the causative viruses A/Alberta/01/2014 (H5N1) (AB14 (H5N1)) and A/British Columbia/1/2015 (H7N9) (BC15 (H7N9)) are reported, the isolates had not been evaluated for their pathogenicity in animal models. In this study, we characterized the pathogenicity of AB14 (H5N1) and BC15 (H7N9) and found that both strain isolates are highly lethal in mice. AB14 (H5N1) caused systemic viral infection and erratic proinflammatory cytokine gene expression in different organs. In contrast, BC15 (H7N9) replicated efficiently only in the respiratory tract, and was a potent inducer for proinflammatory cytokine genes in the lungs. Our study provides experimental evidence to complement the specific human case reports and animal models for evaluating vaccine and antiviral candidates against potential influenza pandemics. View Full-Text
Keywords: influenza A virus; H5N1; H7N9; pathogenesis in mice influenza A virus; H5N1; H7N9; pathogenesis in mice
►▼ Show Figures 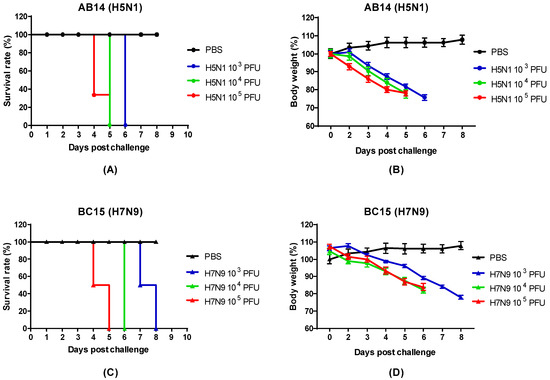