Viruses of Polar Aquatic Environments
Next Article in Special Issue

Host Resistance, Genomics and Population Dynamics in a Salmonella Enteritidis and Phage System

Bacteriophages represent an alternative solution to control bacterial infections. When interacting, bacteria and phage can evolve, and this relationship is described as antagonistic coevolution, a pattern that does not fit all models. In this work, the model consisted of a microcosm of Salmonella enterica serovar Enteritidis and φSan23 phage. Samples were taken for 12 days every 48 h. Bacteria and phage samples were collected; and isolated bacteria from each time point were challenged against phages from previous, contemporary, and subsequent time points. The phage plaque tests, with the genomics analyses, showed a mutational asymmetry dynamic in favor of the bacteria instead of antagonistic coevolution. This is important for future phage-therapy applications, so we decided to explore the population dynamics of Salmonella under different conditions: pressure of one phage, a combination of phages, and phages plus an antibiotic. The data from cultures with single and multiple phages, and antibiotics, were used to create a mathematical model exploring population and resistance dynamics of Salmonella under these treatments, suggesting a nonlethal, growth-inhibiting antibiotic may decrease resistance to phage-therapy cocktails. These data provide a deep insight into bacterial dynamics under different conditions and serve as additional criteria to select phages and antibiotics for phage-therapy. View Full-Text
Keywords: phage-therapy; Salmonella Enteritidis; bacteria-phage coevolution; antibiotics; bacterial resistance phage-therapy; Salmonella Enteritidis; bacteria-phage coevolution; antibiotics; bacterial resistance
►▼ Show Figures 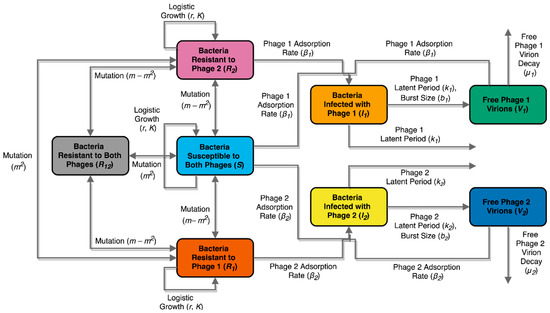