Atypical porcine pestivirus (APPV) is a newly recognized member of the Flaviviridae family. This novel porcine pestivirus was first described in 2015 in the USA, where it has been associated with congenital tremor type A-II in new-born piglets. APPV is widely distributed in domestic pigs in Europe and Asia. In this study, a virological survey was performed in Northern Italy to investigate the presence of APPV using molecular methods. Testing of 360 abortion samples from pig herds revealed two APPV strains from distinct provinces in the Lombardy region and testing of 430 wild boar blood samples revealed three strains, one from Lombardy and two from Emilia Romagna. The nucleotide sequencing of a fragment of the nonstructural protein 3-coding region revealed a high similarity to the previously detected European strains (Spanish, German, and Italian) of APPV. View Full-Text
Keywords: pestivirus; pig; APPV; phylogenetic analysis; Italy pestivirus; pig; APPV; phylogenetic analysis; Italy
►▼ Show Figures 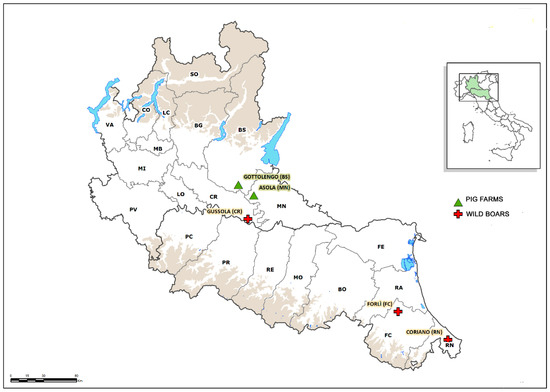