Metagenomic Analysis of Virioplankton from the Pelagic Zone of Lake Baikal

Potato spindle tuber viroid (PSTVd) causes systemic infection in plant hosts. There are many studies on viroid-host plant interactions, but they have predominantly focused on the aboveground part of the plant. Here, we investigated transcriptomic profile changes in tomato roots systemically infected with mild or severe PSTVd variants using a combined microarray/RNA-seq approach. Analysis indicated differential expression of genes related to various Gene Ontology categories depending on the stage of infection and PSTVd variant. A majority of cell-wall-related genes were down-regulated at early infection stages, but at the late stage, the number of up-regulated genes increased significantly. Along with observed alterations of many lignin-related genes, performed lignin quantification indicated their disrupted level in PSTVd-infected roots. Altered expression of genes related to biosynthesis and signaling of auxin and cytokinin, which are crucial for lateral root development, was also identified. Comparison of both PSTVd infections showed that transcriptional changes induced by the severe variant were stronger than those caused by the mild variant, especially at the late infection stage. Taken together, we showed that similarly to aboveground plant parts, PSTVd infection in the underground tissues activates the plant immune response. View Full-Text
Keywords: PSTVd; root; auxin; transcriptome; RNA-seq; microarray PSTVd; root; auxin; transcriptome; RNA-seq; microarray
►▼ Show Figures 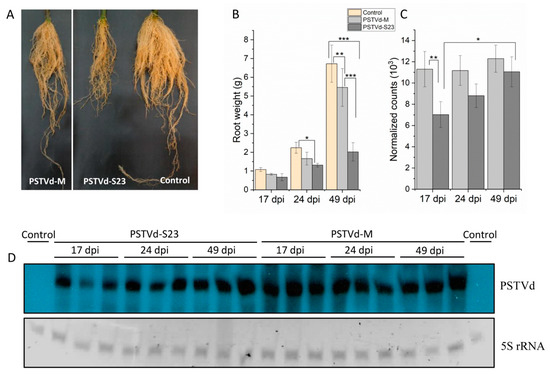