Plant receptor-like kinases (RLKs) exert an essential function in the transduction of signals from the cell exterior to the cell interior, acting as important regulators of plant development and responses to environmental conditions. A growing body of evidence suggests that RLKs may play relevant roles in plant-virus interactions, although the details and diversity of effects and underlying mechanisms remain elusive. The C4 protein from different geminiviruses has been found to interact with RLKs in the CLAVATA 1 (CLV1) clade. However, whether C4 can interact with RLKs in other subfamilies and, if so, what the biological impact of such interactions might be, is currently unknown. In this work, we explore the interaction landscape of C4 from the geminivirus Tomato yellow leaf curl virus within the Arabidopsis RLK family. Our results show that C4 can interact with RLKs from different subfamilies including, but not restricted to, members of the CLV1 clade. Functional analyses of the interaction of C4 with two well-characterized RLKs, FLAGELLIN SENSING 2 (FLS2) and BRASSINOSTEROID INSENSITIVE 1 (BRI1), indicate that C4 might affect some, but not all, RLK-derived outputs. The results presented here offer novel insight on the interface between RLK signaling and the infection by geminiviruses, and point at C4 as a potential broad manipulator of RLK-mediated signaling.
Keywords: geminivirus; C4; TYLCV; RLK; CLV1; FLS2; BRI1; BRL3; NIK1; PSKR1 geminivirus; C4; TYLCV; RLK; CLV1; FLS2; BRI1; BRL3; NIK1; PSKR1

Receptor kinases (or receptor-like kinases (RLKs) in plants) are transmembrane proteins localized at the surface of eukaryotic cells, containing an extracellular domain (ECD), a transmembrane domain (TMD), and an intracellular kinase domain (KD). In plants, RLKs play a crucial role in the transduction of signals from the cell exterior to the cell interior, regulating a plethora of different processes during development, as well as during the interaction of plants with their environment [1,2,3]. This functional diversity is enabled by the large expansion of the RLK family, which comprises more than 600 members in Arabidopsis thaliana (hereafter referred to as Arabidopsis) and more than 1000 members in rice [4].
The ECDs of RLKs are diverse and can contain different domains, including leucine-rich repeats (LRR), extensin-like, lectin-like, epidermal-growth-factor-like repeats, and LysM, among others [4]. ECDs bind extracellular ligands of endogenous or exogenous origin, such as peptides, steroids, and saccharides, and can mediate homo- or hetero-dimerization of RLKs [1,2,3,5]. Upon perception of the corresponding ligand, the intracellular KD associates with interacting partners to initiate signal relay inside the cell.
Given the multifaceted nature of plant-pathogen interactions, it is not surprising that RLKs can influence this interface at multiple levels. First, and most evidently, some RLKs act as pattern-recognition receptors (PRRs), mediating perception of molecular patterns from pathogens (pathogen-associated molecular patterns (PAMPs)) or produced by the plant upon recognition of a biotic threat (damage-associated molecular patterns (DAMPs)) [6]. PRRs then initiate a signaling cascade that leads to the activation of pattern-triggered immunity (PTI). Non-PRR RLKs may also regulate other aspects of plant defense, such as the intercellular movement of RNA silencing [7]. In addition, RLKs mediating growth and developmental processes, like the receptor of the plant steroid hormone brassinosteroid (BR), BRASSINOSTEROID INSENSITIVE 1 (BRI1), could indirectly affect defense outputs through molecular cross-talks [8] or influence pathogen performance in other defense-independent ways.Although the relevance of RLKs, and in particular PRRs, in plant interactions with extracellular pathogens such as bacteria and fungi is uncontested, their involvement in plant-virus interactions is currently controversial (reviewed in [9,10]). PRR RLKs have been shown to influence the outcome of viral infections at least in certain RNA virus-host combinations [11,12], although the nature of the putative ligand(s) remains enigmatic. Other RLKs, not presently described as PRRs, have also been found to play a role in anti-viral defense. This is the case of NSP-INTERACTING KINASE (NIK1), which inhibits translation of viral genes in infections by the DNA viruses geminiviruses, and of BARELY ANY MERISTEM 1 (BAM1), which promotes the intercellular spread of RNA silencing [7,13]. Interestingly, enhancing BR signaling, which depends on BRI1, dramatically alleviates symptom development in tomato plants infected with a geminivirus [14].
In recent years, several cases of geminivirus-encoded proteins targeting RLKs have been documented, underscoring the relevance of this family of receptors for the geminiviral infection. The nuclear shuttle protein (NSP) of the bipartite geminiviruses Tomato golden mosaic virus (TGMV), Tomato crinkle leaf yellow virus (TCrLYV), and Cabbage leaf curl virus (CaLCuV) interacts with the intracellular domain of Arabidopsis NIK1 (and its homologues NIK2 and NIK3) [15], inhibiting its function in anti-viral defense [13,16,17]. C4/AC4 from different geminiviruses has been found to interact with RLKs in the CLAVATA 1 (CLV1) clade (reviewed in [10,18]): C4 from Mungbean yellow mosaic virus (MYMV) interacts with Arabidopsis BARELY ANY MERISTEM 1 (AtBAM1) [19]; C4 from Tomato yellow leaf curl virus (TYLCV) interacts with AtBAM1, its close homologue AtBAM2, and with BAM1 orthologues in tomato and Nicotiana benthamiana [7]; and C4 from Beet severe curly top virus (BSCTV) interacts with tomato CLV1 [20]. However, whether C4 can interact with RLKs outside of the CLV1 clade and, if so, what the biological impact and relevance of such interactions would be, remain open questions.
In this work, we explore the interaction landscape of C4 from TYLCV within the Arabidopsis RLK family. For this purpose, we selected eight RLKs from Arabidopsis, spanning five different subfamilies, and tested the interaction with C4 in a targeted manner through two independent methods in planta, namely co-immunoprecipitation (co-IP) and Fӧrster resonance energy transfer-fluorescence lifetime imaging microscopy (FRET-FLIM). Our results indicate that C4 can broadly interact with plant RLKs and that these interactions cannot be predicted by the subfamily classification of RLK family members. Functional analyses of the interaction of C4 with two well-characterized RLKs, the PRR FLAGELLIN SENSING 2 (FLS2) and the non-PRR BRI1, revealed that C4 might affect some, but not all, RLK-derived outputs. Our results shed new light on the interface between RLK signaling and the infection by geminiviruses and suggest C4 as a potential broad manipulator of plasma membrane-transduced signaling.

Transient co-expression was performed in three-week-old to four-week-old N. benthamiana leaves through Agrobacterium infiltration (OD600 = 0.5). For both co-IP and FRET-FLIM assays, a clone to express C4-GFP [7] was co-infiltrated with clones to express BAM1-, CLV1-, BRI1-, BRL3-, PSKR1-, FLS2-, NIK1-, BAK1-, and PERK1-RFP (see “Plasmids and cloning”). Samples were taken two days after infiltration.

N. benthamiana leaf discs transiently co-expressing the proteins of interest were used to perform FRET-FLIM experiments. C4–GFP was used as a donor protein whereas the different RLKs fused to RFP were used as acceptor proteins. FRET-FLIM analysis was performed as described previously [7].

Protein sequences were retrieved from the NCBI database. Phylogenetic analysis and protein sequence alignment were performed using CLC Workbench 10. A Clustal W multiple alignment of amino acid sequences was performed with a BLOSUM cost matrix with a gap open cost of 10 and a gap extend cost of 0.1. Protein alignment was used as base for building the tree in which genetic distances were analyzed under the Jukes-Canto model with a Neighbor-Joining method without using an outgroup.

This research was funded by the Shanghai Center for Plant Stress Biology from the Chinese Academy of Sciences, and the National Science Foundation China (grant numbers 31671994 and 31870250). BGG is the recipient of a Talent-Introduction Grant (Chinese Postdoctoral International Exchange Program).

The authors thank Xinyu Jian and Aurora Luque for excellent technical assistance, and all members in the Lozano-Duran lab for stimulating discussions and useful suggestions. 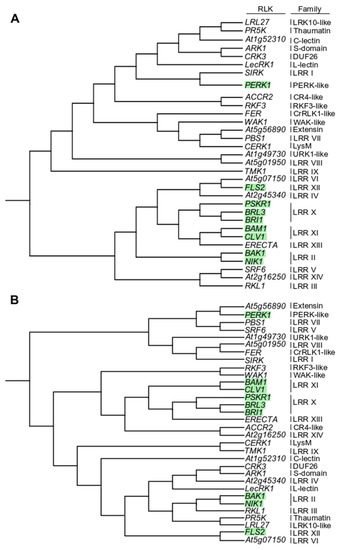 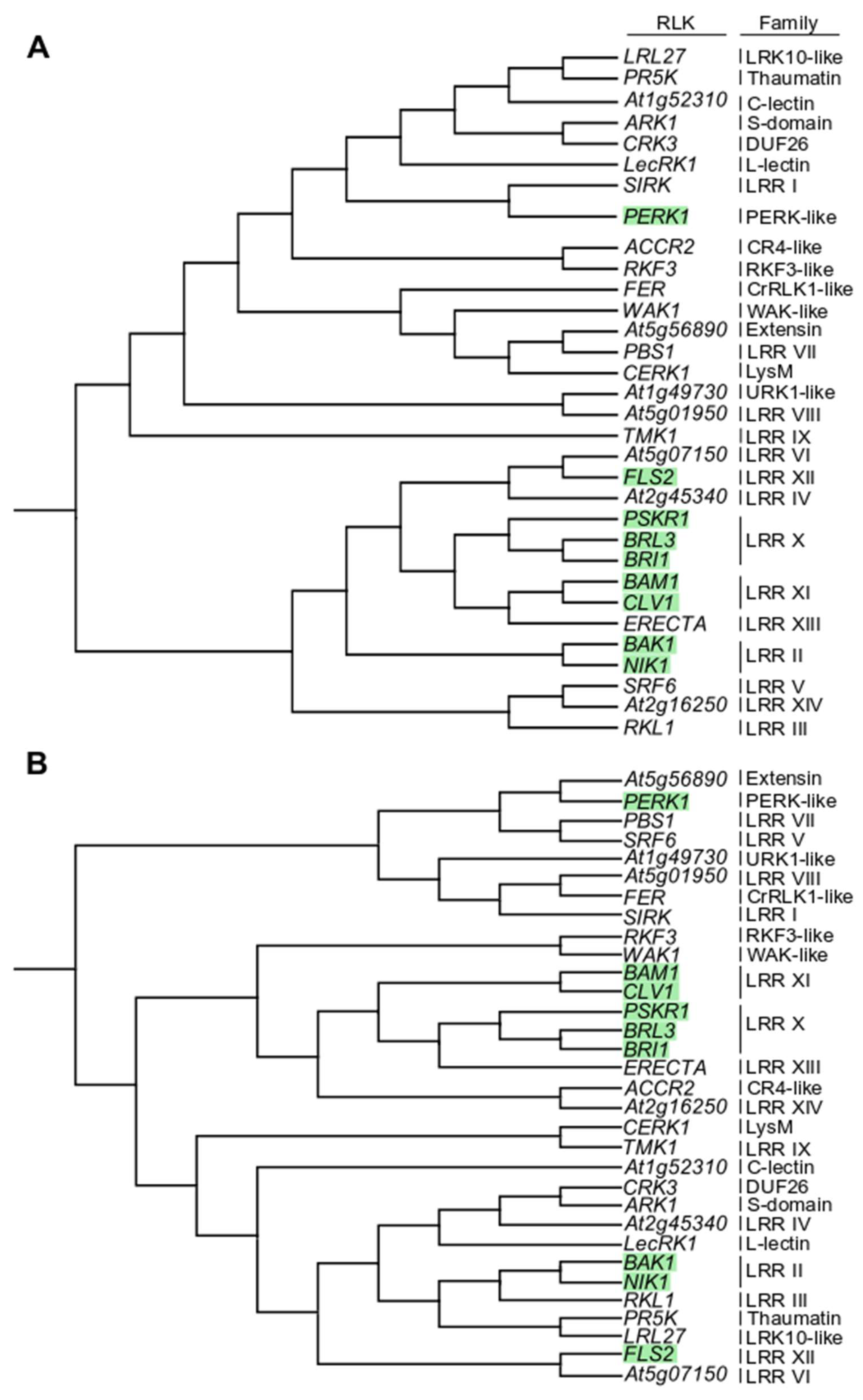 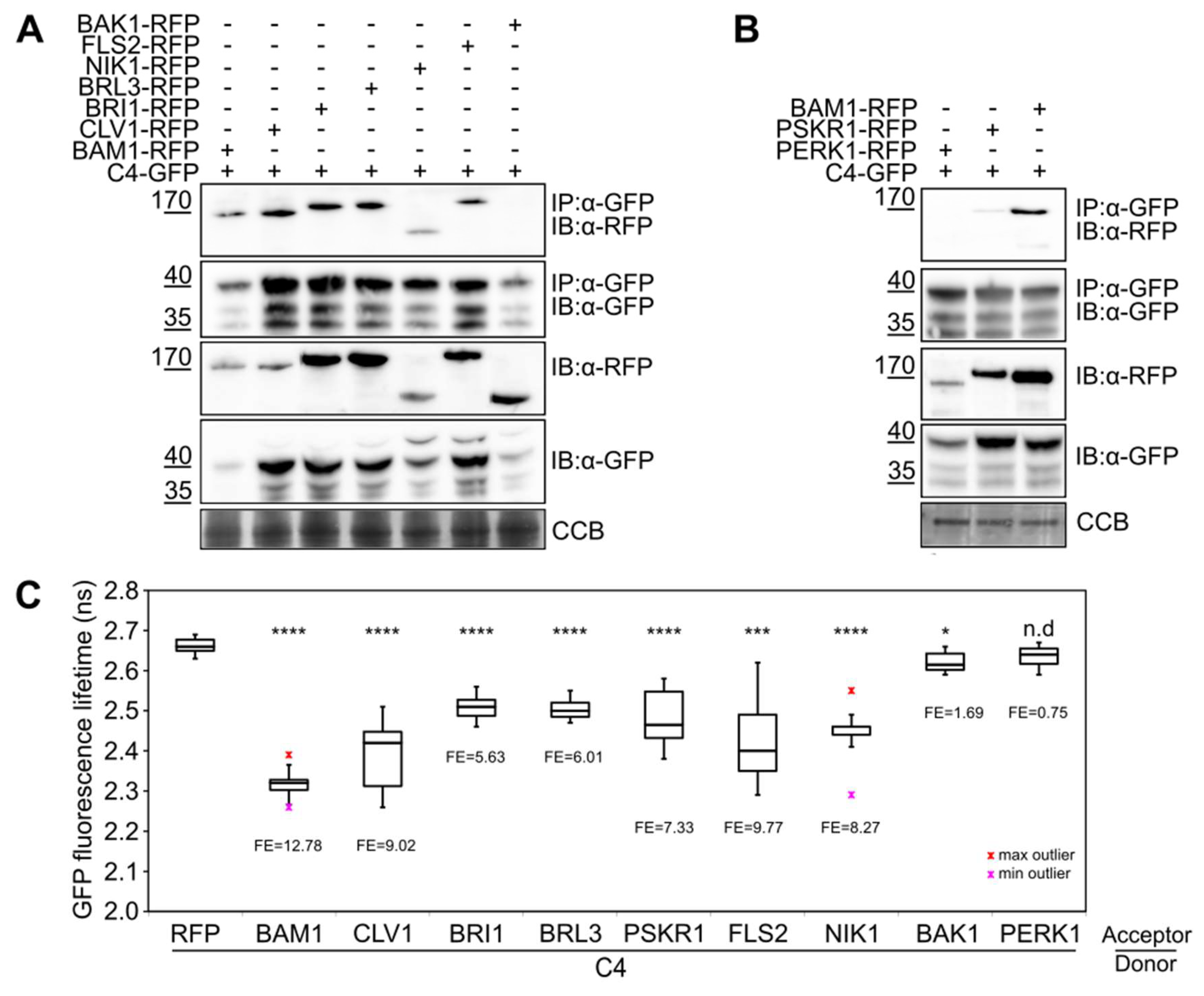 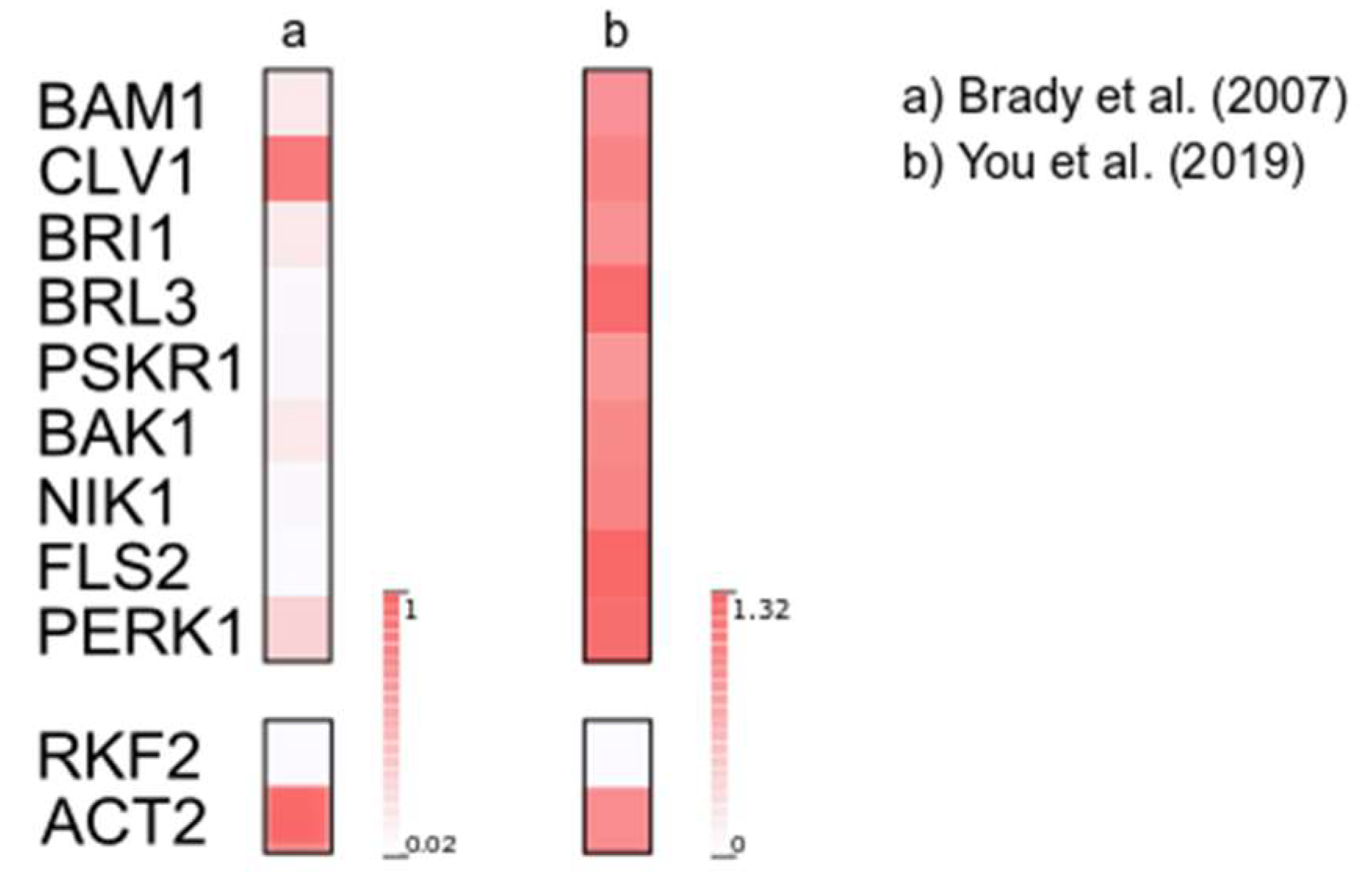 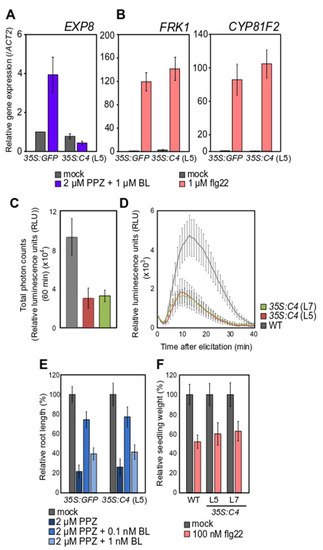