Erwinia amylovora is a globally devastating pathogen of apple, pear, and other Rosaceous plants. The use of lytic bacteriophages for disease management continues to garner attention as a possible supplement or alternative to antibiotics. A quantitative productive host range was established for 10 Erwinia phages using 106 wild type global isolates of E. amylovora, and the closely related Erwinia pyrifoliae, to investigate the potential regional efficacy of these phages within a biopesticide. Each host was individually infected with each of the 10 Erwinia phages and phage production after 8 h incubation was measured using quantitative real time PCR (qPCR) in conjunction with a standardized plasmid. PCR amplicons for all phages used in the study were incorporated into a single plasmid, allowing standardized quantification of the phage genome copy number after the infection process. Nine of the tested phages exhibited a broad host range, replicating their genomes by at least one log in over 88% of tested hosts. Also, every Amygdaloideae infecting E. amylovora host was able to increase at least one phage by three logs. Bacterial hosts isolated in western North America were less susceptible to most phages, as the mean genomic titre produced dropped by nearly two logs, and this phenomenon was strongly correlated to the amount of exopolysaccharide produced by the host. This method of host range analysis is faster and requires less effort than traditional plaque assay techniques, and the resulting quantitative data highlight subtle differences in phage host preference not observable with typical plaque-based host range assays. These quantitative host range data will be useful to determine which phages should be incorporated into a phage-mediated biocontrol formulation to be tested for regional and universal control of E. amylovora. View Full-Text
Keywords: bacteriophages; Erwinia amylovora; host range; qPCR; fire blight; phage therapy bacteriophages; Erwinia amylovora; host range; qPCR; fire blight; phage therapy
►▼ Show Figures 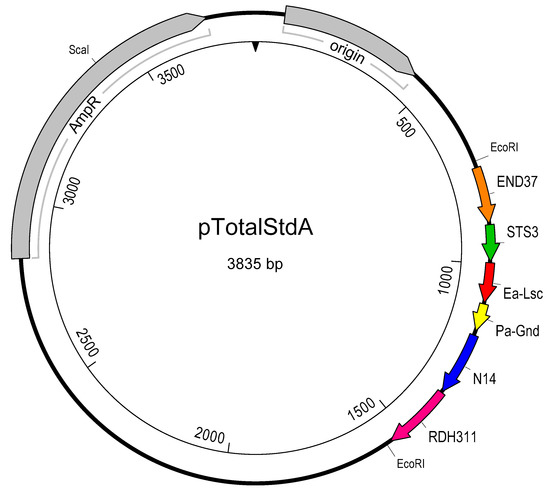