Non-pandemic variants of the Human Immunodeficiency Virus Type 1 (HIV-1) subtype B accounts for a significant fraction of HIV infections in several Caribbean islands, Northeastern South American countries and the Northern Brazilian states of Roraima and Amazonas. In this paper, we used a comprehensive dataset of HIV-1 subtype B pol sequences sampled in Amazonas and Roraima between 2007 and 2017 to reconstruct the phylogeographic and demographic dynamics of the major HIV-1 subtype B non-pandemic Brazilian lineage, designated as BCAR-BR-I. Our analyses revealed that its origin could be traced to one of many viral introductions from French Guiana and Guyana into Northern Brazil, which probably occurred in the state of Amazonas around the late 1970s. The BCAR-BR-I clade was rapidly disseminated from Amazonas to Roraima, and the epidemic grew exponentially in these Northern Brazilian states during the 1980s and 1990s, coinciding with a period of economic and fast population growth in the region. The spreading rate of the BCAR-BR-I clade, however, seems to have slowed down since the early 2000s, despite the continued expansion of the HIV-1 epidemic in this region in the last decade. View Full-Text
Keywords: HIV-1; subtype B; non-pandemic; Brazil; Caribbean; phylogeography; phylodynamics HIV-1; subtype B; non-pandemic; Brazil; Caribbean; phylogeography; phylodynamics
►▼ Show Figures 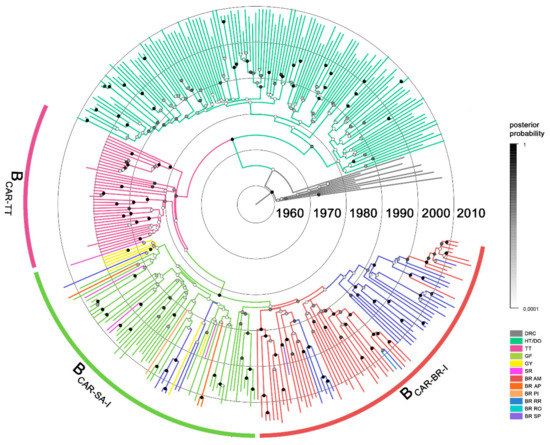