Drivers of MERS-CoV Emergence in Qatar

MERS-CoV (Middle East respiratory syndrome corona virus) antibodies were detected in camels since 1983, but the first human case was only detected in 2012. This study sought to identify and quantify possible drivers for the MERS-CoV emergence and spillover to humans. A list of potential human, animal and environmental drivers for disease emergence were identified from literature. Trends in possible drivers were analyzed from national and international databases, and through structured interviews with experts in Qatar. The discovery and exploitation of oil and gas led to a 5-fold increase in Qatar GDP coupled with a 7-fold population growth in the past 30 years. The lifestyle gradually transformed from Bedouin life to urban sedentary life, along with a sharp increase in obesity and other comorbidities. Owing to substantial governmental support, camel husbandry and competitions flourished, exacerbating the already rapidly occurring desertification that forced banning of free grazing in 2005. Consequently, camels were housed in compact barns alongside their workers. The transition in husbandry leading to high density camel farming along with increased exposure to humans, combined with the increase of camel movement for the racing and breeding industry, have led to a convergence of factors driving spillover of MERS-CoV from camels to humans. View Full-Text
Keywords: Drivers; MERS-CoV; Qatar Drivers; MERS-CoV; Qatar
►▼ Show Figures 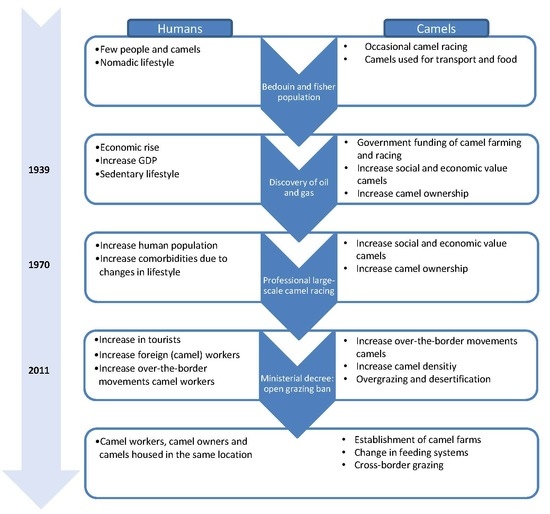