Steven A. Mauro
3 and

Shiga toxin (Stx)-encoding E. coli (STEC) strains are responsible for sporadic outbreaks of food poisoning dating to 1982, when the first STEC strain, E. coli O157:H7, was isolated. Regardless of STEC serotype, the primary symptoms of STEC infections are caused by Stx that is synthesized from genes resident on lambdoid prophage present in STEC. Despite similar etiology, the severity of STEC-mediated disease varies by outbreak. However, it is unclear what modulates the severity of STEC-mediated disease. Stx production and release is controlled by lytic growth of the Stx-encoding bacteriophage, which in turn, is controlled by the phage repressor. Here, we confirm our earlier suggestion that the higher spontaneous induction frequency of Stx-encoding prophage is a consequence, in part, of lower intracellular repressor levels in STEC strains versus non-STEC strains. We also show that this lowered intracellular repressor concentration is a consequence of the utilization of alternative binding/regulatory strategies by the phage repressor. We suggest that a higher spontaneous induction frequency would lead to increased virulence. View Full-Text
Keywords: bacteriophage; Shiga toxin; DNA binding; transcription bacteriophage; Shiga toxin; DNA binding; transcription
►▼ Show Figures 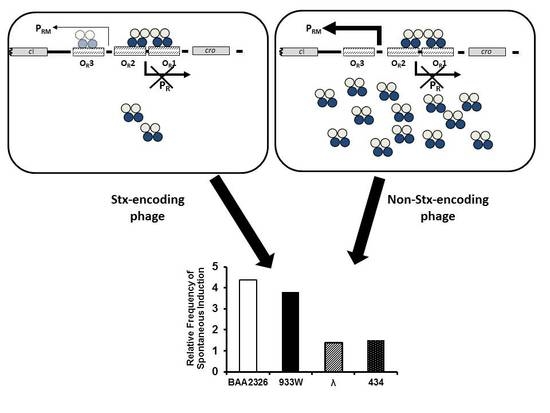