Phage Therapy: What Have We Learned?
Previous Article in Special Issue

In Vitro Studies of Lipopolysaccharide-Mediated DNA Release of Podovirus HK620

Gram-negative bacteria protect themselves with an outermost layer containing lipopolysaccharide (LPS). O-antigen-specific bacteriophages use tailspike proteins (TSP) to recognize and cleave the O-polysaccharide part of LPS. However, O-antigen composition and structure can be highly variable depending on the environmental conditions. It is important to understand how these changes may influence the early steps of the bacteriophage infection cycle because they can be linked to changes in host range or the occurrence of phage resistance. In this work, we have analyzed how LPS preparations in vitro trigger particle opening and DNA ejection from the E. coli podovirus HK620. Fluorescence-based monitoring of DNA release showed that HK620 phage particles in vitro ejected their genome at velocities comparable to those found for other podoviruses. Moreover, we found that HK620 irreversibly adsorbed to the LPS receptor via its TSP at restrictive low temperatures, without opening the particle but could eject its DNA at permissive temperatures. DNA ejection was solely stimulated by LPS, however, the composition of the O-antigen dictated whether the LPS receptor could start the DNA release from E. coli phage HK620 in vitro. This finding can be significant when optimizing bacteriophage mixtures for therapy, where in natural environments O-antigen structures may rapidly change. View Full-Text
Keywords: O-antigen specific phage; podovirus; HK620; lipopolysaccharide; in vitro particle opening; tailspike protein O-antigen specific phage; podovirus; HK620; lipopolysaccharide; in vitro particle opening; tailspike protein
►▼ Show Figures 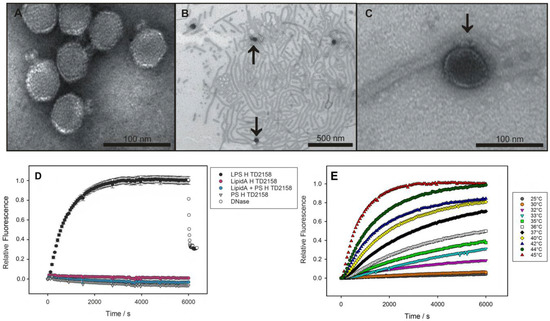