Bacteriophages are currently considered as a promising alternative to antibiotics and disinfectants. However, the use of phages in different clinical and industrial settings will involve their exposure to other disinfectants. As a result, the outcome of the phage treatment will depend on two aspects derived from such interactions. On the one hand, the susceptibility of the phage to disinfectants at the concentrations used for disinfection and at lower residual concentrations needs to be determined. Additionally, the existence of synergistic or antagonistic interactions between phages and disinfectants would also affect the potential success of phage biocontrol applications. Here, we tested these effects for the antistaphylococcal phage phiIPLA-RODI by using four different disinfectants: benzalkonium chloride, triclosan, chlorhexidine and hydrogen peroxide. Our results highlight the differences between disinfectants regarding their effect on phage survival and antimicrobial properties. For instance, our data suggests that, out of the four disinfectants used, benzalkonium chloride would be the most adequate to use in settings where phages are to be applied. Nonetheless, this preliminary analysis grants the need for further studies with a larger number of disinfectants for the development of a phiIPLA-RODI-based product. View Full-Text
Keywords: bacteriophages; disinfectants; food industry; Staphylococcus aureus bacteriophages; disinfectants; food industry; Staphylococcus aureus
►▼ Show Figures 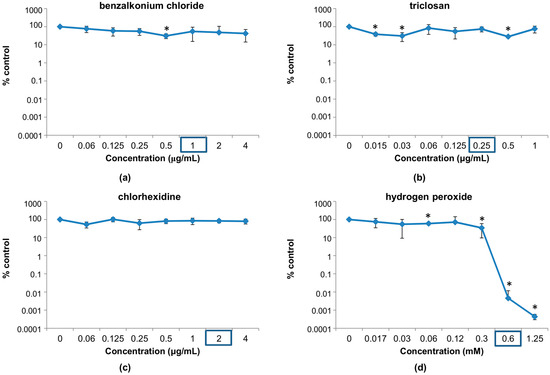