ISG15, a Small Molecule with Huge Implications: Regulation of Mitochondrial Homeostasis
Next Article in Special Issue

Description, Distribution, and Relevance of Viruses of the Forest Pathogen Gremmeniella abietina
Previous Article in Journal

Hymenoscyphus albidus is a native fungus in Europe where it behaves as a harmless decomposer of leaves of common ash. Its close relative Hymenoscyphus fraxineus was introduced into Europe from Asia and currently threatens ash (Fraxinus sp.) stands all across the continent causing ash dieback. H. fraxineus isolates from Europe were previously shown to harbor a mycovirus named Hymenoscyphus fraxineus Mitovirus 1 (HfMV1). In the present study, we describe a conspecific mycovirus that we detected in H. albidus. HfMV1 was consistently identified in H. albidus isolates (mean prevalence: 49.3%) which were collected in the sampling areas before the arrival of ash dieback. HfMV1 strains in both fungal hosts contain a single ORF of identical length (717 AA) for which a mean pairwise identity of 94.5% was revealed. The occurrence of a conspecific mitovirus in H. albidus and H. fraxineus is most likely the result of parallel virus evolution in the two fungal hosts. HfMV1 sequences from H. albidus showed a higher nucleotide diversity and a higher number of mutations compared to those from H. fraxineus, probably due to a bottleneck caused by the introduction of H. fraxineus in Europe. Our data also points to multiple interspecific virus transfers from H. albidus to H. fraxineus, which could have contributed to the intraspecific virus diversity found in H. fraxineus. View Full-Text
Keywords: Chalara fraxinea; Hymenoscyphus pseudoalbidus; ash dieback; Narnaviridae; evolution; invasive species; horizontal virus transmission Chalara fraxinea; Hymenoscyphus pseudoalbidus; ash dieback; Narnaviridae; evolution; invasive species; horizontal virus transmission
►▼ Show Figures 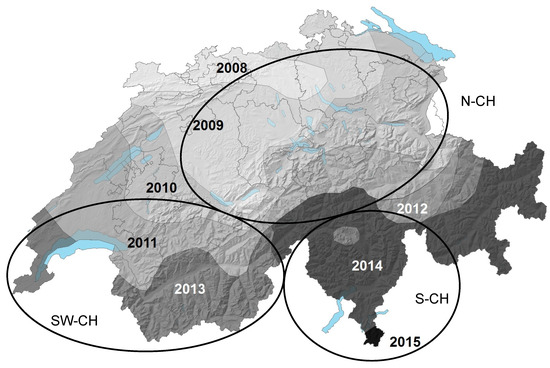