Baculovirus as a Tool for Gene Delivery and Gene Therapy

The baculovirus expression system (BES) is widely used for the production of vertebrate proteins or vaccines in insect cells or larvae. The BES is less expensive than mammalian cell expression systems, has a convenient protein production method, and has a short production time [1]. The most useful feature of the BES is that it leads to the expression of correctly folded and post-translationally modified proteins at a similar level to mammalian expression systems [2,3]. The BES uses a polyhedrin promoter with strong activity. However, the production efficiency of a foreign protein using this polyhedrin promoter is not as high as that of native polyhedrin [4]. Therefore, various attempts have been made to increase the production efficiency of foreign proteins, such as the addition of transcriptional enhancers or fusion with a carrier protein as a “fusion partner”. The fusion partner is frequently highly expressed in host cells, which not only enhances the expression level of the fusion protein, but also favors the purification of the fusion protein [5]. However, these methods have not been applied to all proteins; thus, it is necessary to remove the fusion partner to prevent structural and functional changes to the target protein [6,7]. Therefore, enzymes such as a TEVp protease [8], TAGZyme [9], or enterokinase [10] should be used, although they have the disadvantage of requiring an additional process for the removal of the protease [6]. Additionally, these enzymes are expensive, difficult to store, and may even degrade the target protein, so special care is required.
An intein with 429 amino acids was discovered in the DnaB gene, encoding a DNA helicase of Synechocystis sp. PCC6803 [11]. The Ssp DnaB mini-intein is a splicing proficient minimal intein consisting of N-terminal 106 residues and C-terminal 48 residues by deletion of the central 275 amino acids [12]. This mini-intein has been well used in commercial plasmids such as the IMPACT system (New England Bio labs, Ipswich, MA, USA). Peptide bond hydrolysis between the C-terminal region of the Ssp dnaB mini-intein and target protein is triggered by shifting the pH from 6.0 to 7.5 at room temperature [13]. Therefore, the target protein can easily be separated from the fusion partner or an affinity tag without an additional protease treatment [14]. Thus, this system is an efficacious tool for protein engineering, such as protein expression and purification, because of its self-cleavage capability [11,15,16].
Several previous reports have shown that the final yield of the target protein may be low because the Ssp DnaB mini-intein fusion protein undergoes in vivo self-cleavage [17]. Self-cleavage may occur because the temperature and pH of the cell culture are similar to the self-cleavage conditions of the Ssp DnaB mini-intein. The conditions for insect cell culture are very similar to the self-cleavage conditions of the Ssp DnaB mini-intein. However, the Ssp DnaB mini-intein has not been applied to baculovirus expression systems. Thus, in this study, we applied the Ssp dnaB mini-intein to the baculovirus expression system and reported the optimal conditions for its use and the additional effects of the Ssp dnaB mini-intein.

To measure the fluorescence intensity, rBm-His6-SspDnaB-EGFP was infected into Bm5 cells. The infection was carried out with 1 × 106 cells per well in 6-well plates that were infected with a multiplicity of infection (MOI) of 5 PFU/cell. Infected cells were collected at 24 h intervals from 24 to 120 hours post-infection (h.p.i) and washed with ice cold PBS. The lysate was prepared by incubating the cells with 1 mL of a lysis buffer (20 mM Tris-HCl, 500 mM NaCl, 1 mM EDTA, 0.1% Tween 20, pH 7.0, protease inhibitor cocktail (Sigma-Aldrich, Saint Louis, MO, USA)) for 30 min on ice followed by sonication, and then, 2 mL of PBS was added. Fluorescence measurements were performed at room temperature in quartz cuvettes with a minimum test volume of 3 mL. The fluorescence intensity of the resulting mixture samples was measured using a K2TM fluorescence spectrometer (ISS, Inc., Champaign, IL, USA) with an excitation filter of 450 nm and emission filter of 510 nm. A minimum of three trials were conducted as previously described [21].

Bm5 cells were cultured on sterile cover slips (placed in 6-well plates) and infected with rBm-His6-SspDnaB-EGFP, rBm-His6-SspDnaB-PPV-VP2, and rBm-His6-SspDnaB-CSFV-E2 at 5 MOI. After 3 days of infection, cells were fixed with cold methanol for 3 min at −20 °C, rinsed with PBS, and blocked with 2% bovine serum albumin for 30 min at 37 °C. Then, the cells were washed three times with PBS. Subsequently, the cells were incubated with specific antibodies against E2 or VP2 for 1 h. After washing the cells with PBS, they were incubated with an Alexa Fluor® 488-conjugated goat antibody (Abcam, Cambridge, UK). Nuclei were stained with PBS containing 10 μg/mL DAPI (Sigma-Aldrich, Saint Louis, MO, USA), and the cells were washed thoroughly. Cover slips were mounted on glass slides with one drop of 50% glycerol in PBS and air dried for 15 min. Visualization and localization of the nucleus and recombinant protein were conducted using a confocal laser scanning microscope LSM 510 (Zeiss, Jena, Germany).

The cell lysate was prepared by incubating cells with PBST (0.1% Triton-X 100 with PBS) containing a protease inhibitor cocktail (Sigma-Aldrich, Saint Louis, MO, USA) for 30 min on ice followed by sonication, and then, the lysate was mixed with a protein sample buffer and boiled. The protein samples were subjected to 12% SDS-PAGE and transferred to an NC membrane. The membranes were blocked in 5% milk in Tris-buffered saline containing 0.05% Tween 20 and were probed with each of the following antibodies: a GFP monoclonal antibody (Abm, Richmond, BC, Canada), PPV VP2 polyclonal antibody (Biorbyt, Cambridge, UK), CSFV-E2 monoclonal antibody (JENO Biotech, Chuncheon, GW, Republic of Korea), and His Tag monoclonal antibody (Abcam, Cambridge, UK). The membranes were then incubated with a horseradish peroxidase-coupled anti-mouse or rabbit IgG antibody (Cell signaling, Danvers, MA, USA), and the bound antibodies were detected using the enhanced chemiluminescence system (Merck Millipore, Burlington, MA, USA) according to the manufacturer’s instructions.

3.2. Cleavage Activity of the Mini-Intein

To examine the cleavage activity of the mini-intein, the recombinant virus-infected cell lysate was collected at 72 h.p.i and treated at 25 °C and pH 7.0. Cleavage of the EGFP fusion protein began at 2 h and was completed after 12 h (Figure 5A). Cleavage of the VP2 fusion protein occurred at 2 h and was completed after 4 h (Figure 5C). However, production of the E2 fusion protein was reduced but cleaved E2 protein was not observed (Figure 5B). These results suggested the mini-intein fused proteins were successfully cleaved under the proper temperature and pH conditions. Generally, pH 7.0 and 27 °C are suggested as the conditions for the self-cleavage of the Ssp DnaB mini-intein [13,29]. These conditions were also suitable for cleavage of the Ssp DnaB mini-intein fusion protein produced in the BES. The initiation and completion times of self-cleavage differed depending on the fused target proteins (Figure 5). In our study, however, cleavage of E2 was observed as the intensity of the band corresponding to the fusion protein decreases with time but that the cleaved protein was extremely instable and was not detected (Figure 5B). Poor production of E2 has been described in other reports [21].

3.3. Status of the Mini-Intein Fusion Protein

To investigate the reason for the enhanced production of the fusion protein, the intracellular status of the fusion protein was examined via immunofluorescence staining. Each recombinant protein except E2 was evenly dispersed in the cytoplasm when expressed in its non-fusion form (Figure 6). However, the mini-intein fused recombinant protein was observed to aggregate in the cytoplasm (Figure 6). The intensity of fluorescence of fusion proteins was also higher than that of non-fusion proteins. Aggregation might increase the stability of the protein against various proteases and may have resulted in the enhanced production of protein. Enhanced stability and production of foreign proteins by supramolecular assembly were reported in other studies [30,31,32,33]. Fusion expression of baculovirus polyhedrin [21,32] and human ferritin heavy chain [33] increased the stability and production of foreign proteins. In our study, the aggregation of foreign proteins did not affect the cleavage activity of the Ssp DnaB mini-intein and His tag affinity purification (Figure S2). However, further study is required to establish whether the work can be successfully translated to a difficult to express protein because this work has been carried out with a model protein. In conclusion, the Ssp DnaB mini-intein is a useful fusion partner in the baculovirus expression system for the easy purification and accumulation of target proteins.

This research was supported by Basic Science Research Program through the National Research Foundation of Korea (NRF) funded by the Ministry of Education (NRF-2017R1D1A1B04036274). 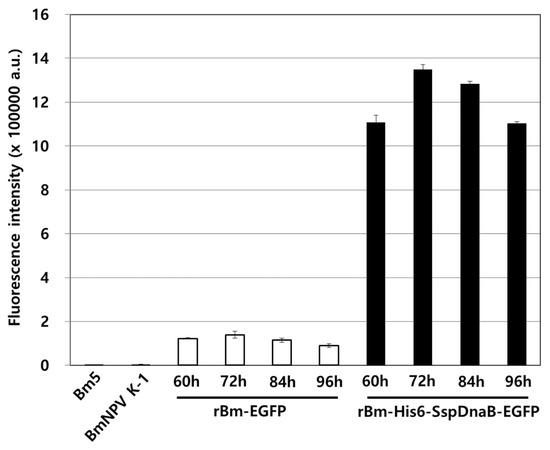 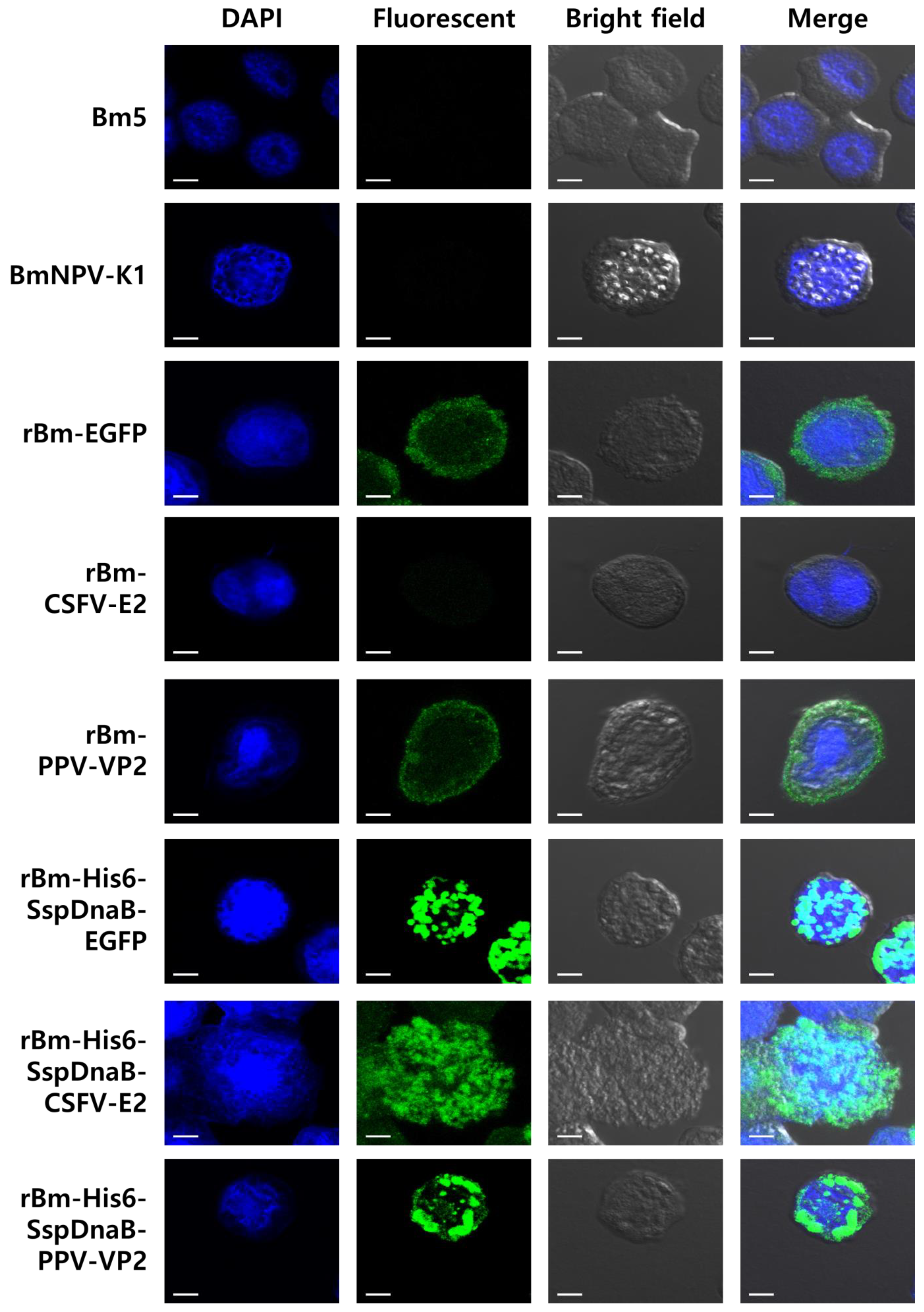 Table 1. Primers used in this study.
Table 1. Primers used in this study.
* The restriction site incorporated into each oligomer is underlined. The forward PCR primer designed for cloning a given target protein into the system must include the Nco I site and the subsequent CA nucleotide sequence before the annealing portion on the target, which allows for the construction of a proper in-frame fusion.
© 2018 by the authors. Licensee MDPI, Basel, Switzerland. This article is an open access article distributed under the terms and conditions of the Creative Commons Attribution (CC BY) license (http://creativecommons.org/licenses/by/4.0/).
We use cookies on our website to ensure you get the best experience. Read more about our cookies here.
Accept
We have just recently launched a new version of our website. Help us to further improve by taking part in this short 5 minute survey here. here.
Never show this again