Climate Sensitive Tree Growth Functions and the Role of Transformations

The aim of this study is to develop climate-sensitive single-tree growth models, to be used in stand based prediction systems of managed forest in Switzerland. Long-term observations from experimental forest management trials were used, together with retrospective climate information from 1904 up to 2012. A special focus is given to the role of transformation of modelling basal area increment, helping to normalize the random error distribution. A nonlinear model formulation was used to describe the basic relation between basal area increment and diameter at breast height. This formulation was widely expanded by groups of explanatory variables, describing competition, stand development, site, stand density, thinning, mixture, and climate. The models are species-specific and contain different explanatory variables per group, being able to explain a high amount of variance (on the original scale, up to 80% in the case of Quercus spec.). Different transformations of the nonlinear relation where tested and based on the mean squared error, the square root transformation performed best. Although the residuals were homoscedastic, they were still long-tailed and not normal distributed, making robust statistics the preferred method for statistical inference. Climate is included as a nonlinear and interacting effect of temperature, precipitation and moisture, with a biological meaningful interpretation per tree species, e.g., showing better growth for Abies alba in warm and wet climates and good growing conditions for Picea abies in colder and dryer climates, being less sensitive on temperature. Furthermore, a linear increase in growth was found to be present since the 1940s. Potentially this is an effect of the increased atmospheric CO2 concentration or changed management in terms of reduced nutrient subtractions from forest ground, since industrialization lowered the demand of residue and slash uptake. View Full-Text
Keywords: tree growth model; climate change; single tree stand simulator; transformation; nonlinear regression; robust methods tree growth model; climate change; single tree stand simulator; transformation; nonlinear regression; robust methods
►▼ Show Figures 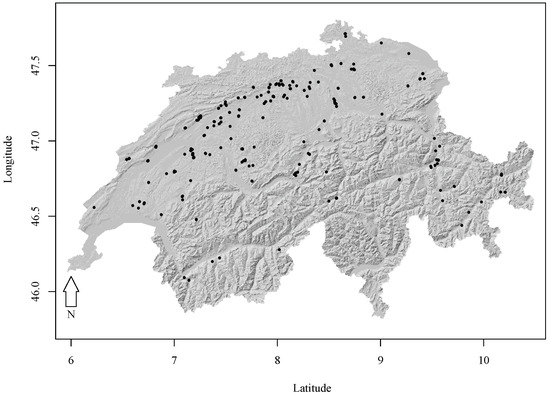