Ecological modeling and forecasting are essential tools for the understanding of complex vegetation dynamics. The parametric demands of some of these models are often lacking or scant for threatened ecosystems, particularly in diverse tropical ecosystems. One such ecosystem and also one of the world’s biodiversity hotspots, Madagascar’s lowland rainforests, have disappeared at an alarming rate. The processes that drive tree species growth and distribution remain as poorly understood as the species themselves. We investigated the application of the process-based individual-based FORMIND model to successfully simulate a Madagascar lowland rainforest using previously collected multi-year forest inventory plot data. We inspected the model’s ability to characterize growth and species abundance distributions over the study site, and then validated the model with an independently collected forest-inventory dataset from another lowland rainforest in eastern Madagascar. Following a comparative analysis using inventory data from the two study sites, we found that FORMIND accurately captures the structure and biomass of the study forest, with r2 values of 0.976, 0.895, and 0.995 for 1:1 lines comparing observed and simulated values across all plant functional types for aboveground biomass (tonnes/ha), stem numbers, and basal area (m2/ha), respectively. Further, in validation with a second study forest site, FORMIND also compared well, only slightly over-estimating shade-intermediate species as compared to the study site, and slightly under-representing shade-tolerant species in percentage of total aboveground biomass. As an important application of the FORMIND model, we measured the net ecosystem exchange (NEE, in tons of carbon per hectare per year) for 50 ha of simulated forest over a 1000-year run from bare ground. We found that NEE values ranged between 1 and −1 t Cha−1 year−1, consequently the study forest can be considered as a net neutral or a very slight carbon sink ecosystem, after the initial 130 years of growth. Our study found that FORMIND represents a valuable tool toward simulating forest dynamics in the immensely diverse Madagascar rainforests. View Full-Text
Keywords: forest modeling; tropical rainforest; Madagascar; forest productivity; individual-based model forest modeling; tropical rainforest; Madagascar; forest productivity; individual-based model
►▼ Show Figures 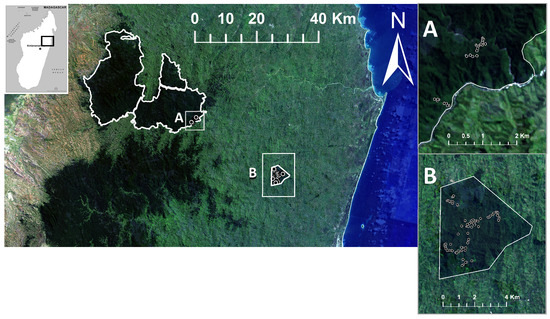