Research Highlights: Leaf chemistry is a key driver of litter decomposition; however, studies directly comparing metabolites that are important for tree growth and defence across different woody species are scarce. Background and Objectives: Choosing 14 temperate woody species differing in their growth rates, nutrient demand, shade tolerance, and drought sensitivity, we hypothesized that the species would group according to their metabolite profiles based on their ecological background. Materials and Methods: We analysed total N and C, soluble amino acid, protein, and phenolic levels in green leaves and leaf litter of these species, each in two consecutive years. Results: Metabolite levels varied significantly across species and between the sampling years which differed in temperature and precipitation (i.e., colder/drier vs warmer/ wetter). Conclusions: The 14 woody species could not be grouped according to their green leaf or leaf litter metabolite profiles. In litter leaves, most of the variation was explained by total phenolics and total nitrogen levels, and in green leaves by total phenolics and total soluble amino acid levels. Local climate variation between the two consecutive years for green leaves or leaf litter led to significant differences in metabolite levels, although some of them were species-specific. View Full-Text
Keywords: amino acids; proteins; phenolics; temperate tree species; N metabolites; litter; leaves; angiosperms; microclimate amino acids; proteins; phenolics; temperate tree species; N metabolites; litter; leaves; angiosperms; microclimate
►▼ Show Figures 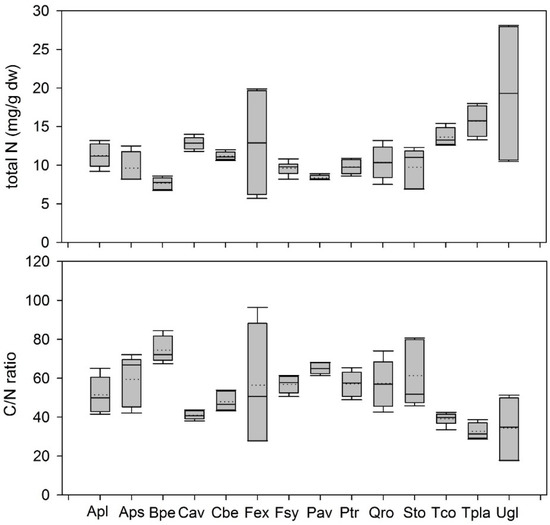