Competition Restricts the Growth, Development, and Propagation of Carpinus tientaiensis: A Rare and Endangered Species in China

Evidence of Constrained Divergence and Conservatism in Climatic Niches of the Temperate Maples (Acer L.)

Research highlights: The availability of global distribution data and new, fossil-calibrated phylogenies has made it possible to compare the climatic niches of the temperate maple (Acer L.) taxa and assess phylogenetic and continental patterns in niche overlap. Background and Objectives: The maples have radiated from East Asia into two other temperate continental bioregions, North America and Eurasia (Europe and West Asia), over a roughly 60-million-year period. During this time, the Earth’s climate experienced pronounced cooling and drying, culminating in cyclic periods of widespread temperate glaciation in the Pliocene to Pleistocene. The objective of this study is to use newly available data to model the climatic niches of 60% of the temperate maples and assess patterns of niche divergence, constraint, and conservatism in the genus’s radiation out of East Asia. Materials and Methods: I assembled global occurrence data and associated climatic information for 71 maple taxa, including all species endemic to temperate North America and Eurasia and their closely related East Asian congeners. I constructed Maxent niche models for all taxa and compared the climatic niches of 184 taxa pairs and assessed phylogenetic signal in key niche axes for each taxon and in niche overlap at the continental and global scale. Results: Maxent models define a fundamental climatic niche for temperate maples and suggest that drought-intolerant taxa have been lost from the Eurasian maple flora, with little continental difference in temperature optima or breadth. Niche axes and niche overlap show minimal evidence of phylogenetic signal, suggesting adaptive evolution. Pairwise niche comparisons reveal infrequent niche overlap continentally and globally, even among sister pairs, with few taxa pairs sharing ecological niche space, providing evidence for constrained divergence within the genus’s fundamental climatic niche. Evidence of niche conservatism is limited to three somewhat geographically isolated regions of high maple diversity (western North America, the Caucasus, and Japan). Conclusions: Over 60 million years of hemispheric radiation on a cooling and drying planet, the maple genus experienced divergent, though constrained, climatic niche evolution. High climatic niche diversity across spatial and phylogenetic scales along with very limited niche overlap or conservatism suggests that the radiation of the genus has largely been one of adaptive diversification. View Full-Text
Keywords: continental disjuncts; environmental niche modeling; Maxent; phylogenetic niche conservatism; paleobotany; phylogenetic signal; sister species; species distribution models continental disjuncts; environmental niche modeling; Maxent; phylogenetic niche conservatism; paleobotany; phylogenetic signal; sister species; species distribution models
►▼ Show Figures 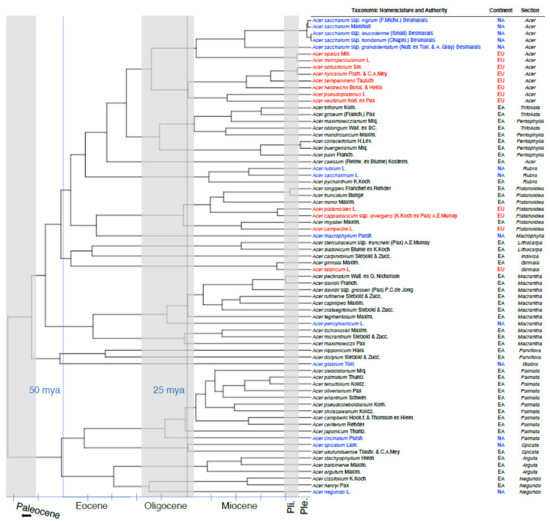