Spatial-Temporal Patterns of Spruce Budworm Defoliation within Plots in Québec

We investigated the spatial-temporal patterns of spruce budworm (Choristoneura fumiferana (Clem.); SBW) defoliation within 57 plots over 5 years during the current SBW outbreak in Québec. Although spatial-temporal variability of SBW defoliation has been studied at several scales, the spatial dependence between individual defoliated trees within a plot has not been quantified, and effects of defoliation level of neighboring trees have not been addressed. We used spatial autocorrelation analyses to determine patterns of defoliation of trees (clustered, dispersed, or random) for plots and for individual trees. From 28% to 47% of plots had significantly clustered defoliation during the 5 years. Plots with clustered defoliation generally had higher mean defoliation per plot and higher deviation of defoliation. At the individual-tree-level, we determined ‘hot spot trees’ (highly defoliated trees surrounded by other highly defoliated trees) and ‘cold spot trees’ (lightly defoliated trees surrounded by other lightly defoliated trees) within each plot using local Getis-Ord Gi* analysis. Results revealed that 11 to 27 plots had hot spot trees and 27% to 64% of them had mean defoliation <25%, while plots with 75% to 100% defoliation had either cold spot trees or non-significant spots, which suggested that whether defoliation was high or low enough to be a hot or cold spot depended on the defoliation level of the entire plot. We fitted individual-tree balsam fir defoliation regression models as a function of plot and surrounding tree characteristics (using search radii of 3–5 m). The best model contained plot average balsam fir defoliation and subject tree basal area, and these two variables explained 80% of the variance, which was 2% to 5% higher than the variability explained by the neighboring tree defoliation, over the 3–5 m search radii tested. We concluded that plot-level defoliation and basal area were adequate for modeling individual tree defoliation, and although clustering of defoliation was evident, larger plots were needed to determine the optimum neighborhood radius for predicting defoliation on an individual. Spatial autocorrelation analysis can serve as an objective way to quantify such ecological patterns. View Full-Text
Keywords: Choristoneura fumiferana; annual defoliation; spatial autocorrelation; spatial-temporal patterns; mixed effect models; intertree variance Choristoneura fumiferana; annual defoliation; spatial autocorrelation; spatial-temporal patterns; mixed effect models; intertree variance
►▼ Show Figures 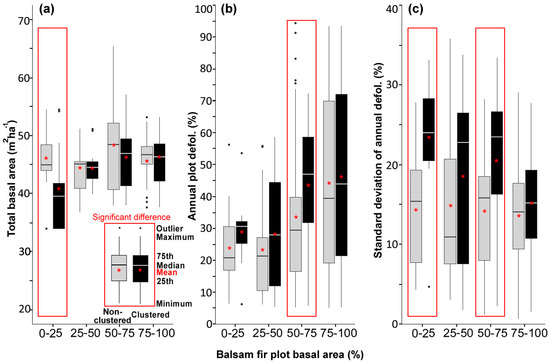