Compression of Next-Generation Sequencing Data and of DNA Digital Files†

The increase in memory and in network traffic used and caused by new sequenced biological data has recently deeply grown. Genomic projects such as HapMap and 1000 Genomes have contributed to the very large rise of databases and network traffic related to genomic data and to the development of new efficient technologies. The large-scale sequencing of samples of DNA has brought new attention and produced new research, and thus the interest in the scientific community for genomic data has greatly increased. In a very short time, researchers have developed hardware tools, analysis software, algorithms, private databases, and infrastructures to support the research in genomics. In this paper, we analyze different approaches for compressing digital files generated by Next-Generation Sequencing tools containing nucleotide sequences, and we discuss and evaluate the compression performance of generic compression algorithms by confronting them with a specific system designed by Jones et al. specifically for genomic file compression: Quip. Moreover, we present a simple but effective technique for the compression of DNA sequences in which we only consider the relevant DNA data and experimentally evaluate its performances. View Full-Text
Keywords: data compression; Next-Generation Sequencing data; DNA; genomes data compression; Next-Generation Sequencing data; DNA; genomes
►▼ Show Figures 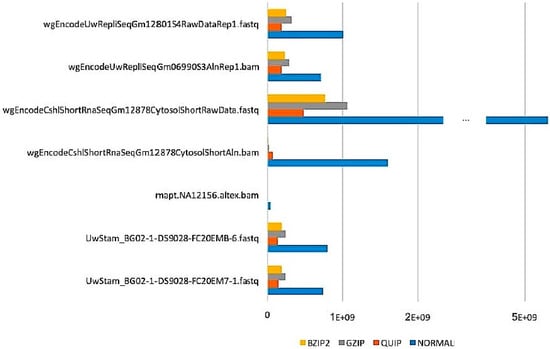 Carpentieri, B. Compression of Next-Generation Sequencing Data and of DNA Digital Files. Algorithms 2020, 13, 151.


Carpentieri B. Compression of Next-Generation Sequencing Data and of DNA Digital Files. Algorithms. 2020; 13(6):151.