The paper deals with the Bamboo Garden Trimming (BGT) problem introduced in [Gąsieniec et al., SOFSEM’17]. The problem is difficult to solved due to its close relationship to Pinwheel scheduling. The garden with n bamboos is an analogue of a system of n machines that have to be attended (e.g., serviced) with different frequencies. During each day, bamboo grows an extra height for and, on the conclusion of the day, at most one bamboo has its entire height cut.The goal is to design a perpetual schedule of cuts to keep the height of the tallest ever bamboo as low as possible. The contribution in this paper is twofold, and is both theoretical and experimental. In particular, the focus is on understanding what has been called priority schedulings, i.e., cutting strategies where priority is given to bamboos whose current height is above a threshold greater than or equal to . Value H represents the total daily growth of the system and it is known that one cannot keep bamboos in the garden below this threshold indefinitely. As the first result, it is proved that, for any distribution of integer growth rates and any priority scheduling, the system stabilises in a fixed cycle of cuts. Then, the focus is on the so-called strategy, a greedy priority scheduling that each day cuts the tallest bamboo, regardless of the growth rates distribution. is known to provide a -approximation, with respect to the lower bound H. One of the main results achieved is that, if stabilises in a round-robin type cycle, then it guarantees 2-approximation. Furthermore, preliminary results are provided relating the structure of the input instance, in terms of growth rates, and the behavior of when applied to such inputs. Finally, a conjecture that is 2-approximating for the BGT problem is claimed, hence an extended experimental evaluation was conducted to support the conjecture and to compare with other relevant scheduling algorithms. The obtained results show that : (i) provides 2-approximation in all considered inputs; and (ii) always outperforms other considered strategies, even those for which better worst case approximation guarantees have been proven. View Full-Text
Keywords: bamboo garden trimming; periodic scheduling; approximation algorithms; perpetual testing; experimental evaluation bamboo garden trimming; periodic scheduling; approximation algorithms; perpetual testing; experimental evaluation
►▼ Show Figures 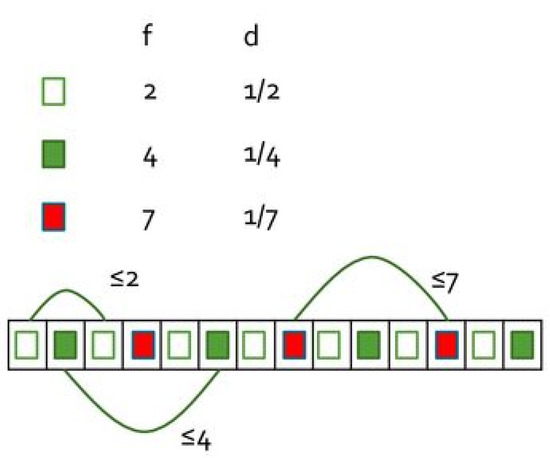