:
A carbon solid acid with large surface area (CSALA) was prepared by partial carbonization of H3PO4 pre-treated peanut shells followed by sulfonation with concentrated H2SO4. The structure and acidity of CSALA were characterized by N2 adsorption–desorption, scanning electron microscopy (SEM), X-ray powder diffraction (XRD), 13C cross polarization (CP)/magic angle spinning (MAS) nuclear magnetic resonance (NMR), X-ray photoelectron spectroscopy (XPS), Fourier transform-infrared spectroscopy (FT-IR), titration, and elemental analysis. The results demonstrated that the CSALA was an amorphous carbon material with a surface area of 387.4 m2/g. SO3H groups formed on the surface with a density of 0.46 mmol/g, with 1.11 mmol/g of COOH and 0.39 mmol/g of phenolic OH. Densities of the latter two groups were notably greater than those observed on a carbon solid acid (CSA) with a surface area of 10.1 m2/g. The CSALA catalyst showed better performance than the CSA for the hydrolysis of cyclohexyl acetate to cyclohexanol. Under optimal reaction conditions, cyclohexyl acetate conversion was 86.6% with 97.3% selectivity for cyclohexanol, while the results were 25.0% and 99.4%, respectively, catalyzed by CSA. The high activity of the CSALA could be attributed to its high density of COOH and large surface area. Moreover, the CSALA showed good reusability. Its catalytic activity decreased slightly during the first two cycles due to the leaching of polycyclic aromatic hydrocarbon-containing SO3H groups, and then remained constant during following uses.
Keywords:
carbon solid acid; peanut shell; large surface area; cyclohexyl acetate; hydrolysis

The surface areas of the CSA, CSALA, and their precursors were investigated by N2 adsorption–desorption at −196 °C. As shown in Table 1, the specific surface area of the CSALA is 387.4 m2/g, which is much higher than that of the CSA. The results show that H3PO4 is an effective activating agent, which can lead to the formation of porosity in the activated carbon from lignocellulosic materials [27].
Scanning electron microscopy (SEM) images, shown in Figure 1, also illustrate the differences between the surface morphologies of the CSA and CSALA. Figure 1a,b show SEM images of the CSA, which exhibits a lamellar structure that is composed of polycyclic aromatic carbon sheets. The CSALA has a similar lamellar structure, but the sheets stack much more loosely. The CSALA carbon sheets are also smaller and have rougher surfaces than the CSA sheets. All of these differences are responsible for the porosity and increased specific surface area of the CSALA compared with the CSA.
Figure 2 shows the XRD patterns of the CSA and CSALA. In both patterns, there is one broad diffraction peak at 2θ angles of 20°–30° (002), which reflects the stacking degree of aromatic carbon sheets [28], and one weak peak at 40°–50° (101), which is attributable to the α axis of the graphite structure [14]. The XRD results indicate that both the CSA and CSALA consist of disordered polycyclic aromatic carbon sheets. However, compared with that of the CSA, the (101) peak of the CSALA is almost non-existent. This corresponds to the smaller carbon sheets in the CSALA, and is consistent with the SEM results.
Figure 3 shows the 13C CP/magic angle spinning (MAS) NMR spectra of the CSA and CSALA. The signals at 128 ppm attributable to polycyclic aromatic carbon atoms are evident in both spectra, indicating that the carbon frameworks of these two materials consist mainly of sp2-derived carbon sheets. Peaks attributable to aromatic carbon bonded to phenolic OH (153 ppm), COOH groups (164 ppm), and carbon atoms in COOH groups (179 ppm) are clearly observed in the spectrum of CSALA. However, the corresponding signals in the CSA spectrum are very weak. This demonstrates the difference between the amounts of phenolic OH and COOH groups in the CSA and CSALA. Moreover, the peaks attributable to aromatic carbon with SO3H groups (ca. 140 ppm) [29] are not obvious in either the CSA or CSALA spectra. This may be attributable to the polycyclic aromatic carbon peak (128 ppm) obscuring the peak of Ar-SO3H. The introduction of SO3H groups to the carbon solid acids was confirmed by X-ray photoelectron spectroscopy (XPS) analysis. As shown in Figure 4, a single S 2p peak at about 168 eV—which is assigned to the SO3H group—is observed in both spectra. This indicates that the sulfonation of carbon materials was successfully achieved in concentrated H2SO4, and all S atoms in the CSA and CSALA are contained in SO3H groups [20].
Fourier transform-infrared spectroscopic (FT-IR) analysis was used to characterize the functional groups contained in the carbon materials. As shown in Figure 5, there are two bands at 1168 cm−1 and 1028 cm−1 in the CSALA spectrum, which can be assigned to the O=S=O symmetric and asymmetric stretching modes, respectively [30]. The same bands also appear in the spectrum of CSA. This illustrates that sulfonic acid groups have been formed on the surface of the CSA and CSALA by the sulfonation process. The band at 1702 cm−1 is attributable to the C=O stretching mode of the COOH groups. There is also a clear adsorption attributable to C=O in the COOH group in the spectrum of pre-CSALA. The generation of COOH groups can be attributed to the treatment with phosphoric acid. Moreover, the evident band around 1577 cm−1 seen in all the spectra is attributable to the C=C stretching vibration of poly aromatic rings [31].
The acid densities of the carbon materials were determined by acid–base titration, and the results are given in Table 1. The total acid density of the CSALA is 1.96 mmol/g, which is higher than that of the CSA (1.12 mmol/g). However, the density of SO3H in the CSALA (0.46 mmol/g) is less than that in the CSA (0.56 mmol/g); further, the main contribution to acid density in the CSALA comes from COOH (1.11 mmol/g), which is far greater than in the CSA (0.44 mmol/g). In addition, the density of COOH in pre-CSALA is 1.08 mmol/g, which is almost the same as that in the carbon material after sulfonation. This agrees reasonably well with the FT-IR results. The abundant COOH in pre-CSALA could partially explain why the CSALA has less SO3H than the CSA. The sulfonation of polycyclic aromatic compounds is an electrophilic substitution reaction; therefore, the electron-withdrawing COOH could decrease the electron density of the aromatic ring, and thus deactivate the sulfonation reaction. This would lead to fewer SO3H groups in the CSALA, even though it has a larger surface area than the CSA. Finally, the density of phenolic OH in the CSALA (0.39 mmol/g) is also much greater than that in the CSA (0.12 mmol/g).

2.2. Hydrolysis of Cyclohexyl Acetate over the CSALA

The reusability of the CSALA for the hydrolysis of cyclohexyl acetate was investigated. After the first run, the catalyst was filtered from the mixture, washed with water, and dried. It was then used directly in a new cycle without any further treatment. As shown in Figure 9, high selectivity (not less than 97.3%) for cyclohexanol was obtained in every cycle; however, the cyclohexyl acetate conversion decreased from 86.6% to 84.9% (second cycle) to 83.2% (third cycle). After this, the conversion remained constant with reuse from the third to the fifth cycles. The CSALA catalyst that had been used for five cycles was characterized by elemental analysis, and the S content was 1.51 wt %. Compared with the fresh CSALA S content of 1.86 wt %, it can be concluded that the activity decrease was partly caused by S (SO3H) leaching. Although sulfonated carbons are considered to be insoluble in some solvents [14], some researchers have found that the catalytic deactivation of carbon solid acids was caused by the leaching of polycyclic aromatic hydrocarbon containing SO3H groups, especially in polar media [32]. The catalytic activity of CSALA decreased during the initial cycles, but reached a plateau after three cycles in this study. This indicated that the leaching of the active species on the CSALA does stop. This may be attributable to the different natures of the acid sites—some sites are readily leached, while others are not. It has been estimated that around 75%–80% of acid sites in a sulfonated carbon catalyst are relatively stable and are not readily leached [32]. This is in accordance with the elemental analysis results. In addition, it can be seen that the activity loss is not proportional to the decrease of the S content. This may be explained by the fact that SO3H groups are not the only active sites. As mentioned above, both the high density of COOH and the high surface area of CSALA contribute greatly to the high activity.

The specific surface area and pore structure of the samples were measured by N2 isothermal adsorption–desorption method using a Micromeritics ASAP 2020 instrument. The surface area was calculated by Brunauer–Emmett–Teller (BET) method. The morphologies of the samples were recorded by scanning electron microscopy (SEM) on FEI Nova NanoSEM 450 (Hillsboro, OR, USA) and Hitachi S-4800 scanning electron microscopes (Tokyo, Japan). The X-ray diffraction (XRD) pattern was observed on a Rigaku D/Max-2500 X-ray diffractometer (Tokyo, Japan) with Cu Kα radiation operating at 40 kV and 100 mA, over a 2θ range of 5°–80° at a scanning speed of 8°/min. 13C CP/MAS NMR spectra were measured at room temperature using a Bruker AV 600 spectrometer (MAS probe: 4 mm and spectra window: 75 kHz, Karlsruhe, Germany). The magic angle spinning rate was 4.5 kHz. FT-IR spectra were obtained on a Nicolet Nexus 470 spectrometer (Madison, WI, USA) with KBr pellet technique. X-ray photoelectron spectroscopy (XPS) was carried out with a Thermo Fisher K-Alpha spectrometer (Tewksbury, MA, USA) with Al Kα radiation. The composition of the samples was determined by the elemental analysis of C, H, N, S, and O using an Elementar Vario EL elemental analyzer (Frankfurt, Germany).
The acid density of the catalyst was estimated by acid–base titration method. To obtain SO3H density, about 0.25 g of catalyst sample was put into a NaCl solution (0.05 mol/L, 30 mL). Then, the mixture was sonicated for 1 h in an ultrasonic bath at room temperature. After that, the solids were filtered off and washed with water. The combined filtrate was titrated with a NaOH solution (0.05 mol/L) using phenolphthalein as indicator. The densities of SO3H were thus obtained based on the results.
The densities of other acidic functional groups of the carbon solid acid—such as carboxyl and phenolic hydroxyl—can be determined by Boehm titration method [33]. About 0.5 g of catalyst was sonicated with 25 mL 0.05 mol/L NaOH (or NaHCO3) solution for 1 h and then soaked for 24 h. After filtration, 50 mL of 0.05 mol/L HCl was added into the solution. Then, the excess HCl were measured by anti-titration with NaOH (0.05 mol/L) using phenolphthalein as indicator. The acid densities—SO3H + COOH + OH (or SO3H + COOH)—could be calculated with the results. At last, the quantities of COOH and OH can be obtained by subtracting the density of SO3H.

Hydrolysis of cyclohexyl acetate was carried out in a stainless steel Teflon-lined autoclave equipped with a magnetic stirrer. In a typical experiment, cyclohexyl acetate, H2O, and an appropriate amount of catalyst were added into the autoclave. The autoclave was sealed and tested for leaks with N2, then purged and pressurized with N2 (0.6 MPa). The temperature was adjusted to the desired value. At the end of reaction, the autoclave was cooled to room temperature and vented. The catalyst was recovered by filtration, and the products were analyzed by capillary gas chromatography using an Agilent 7890 instrument (Santa Clara, CA, USA) with a 30 m × 0.32 mm KB-Wax column and flame ionization detector (FID). The area normalization was applied for quantitative analysis. 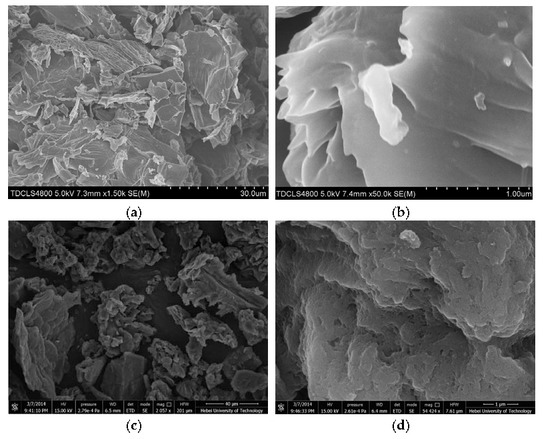 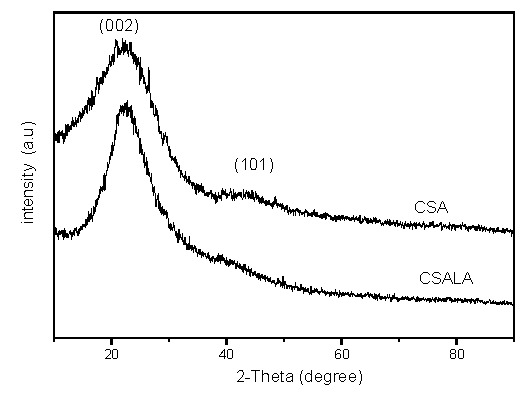 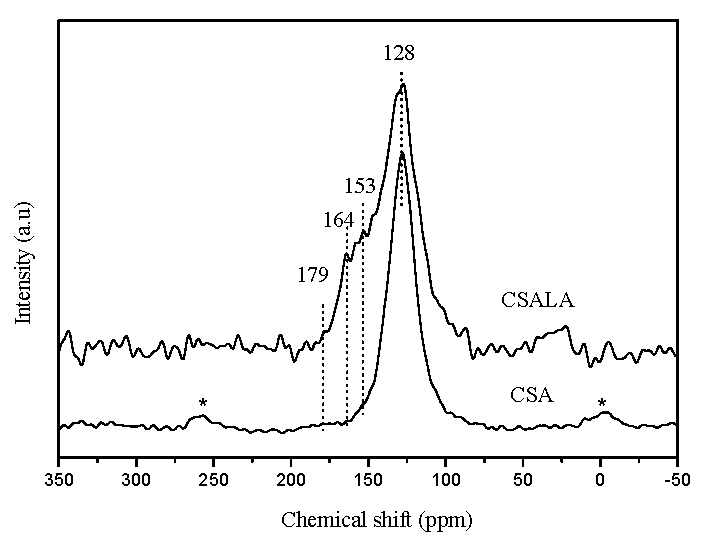 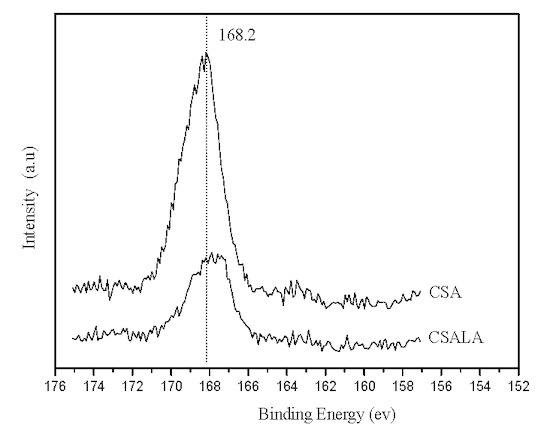 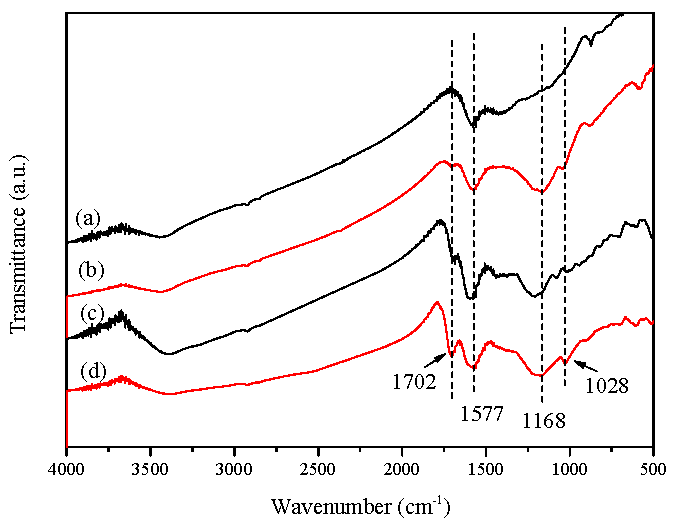 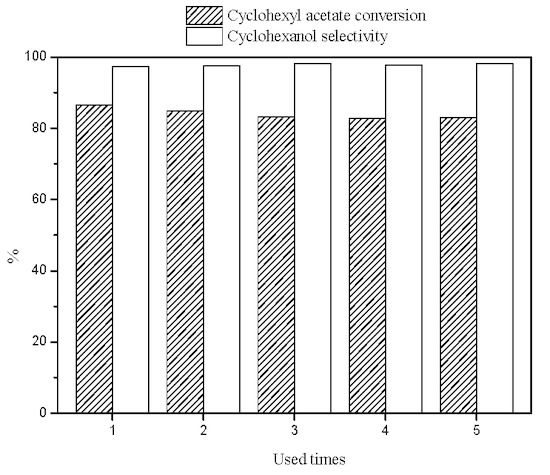 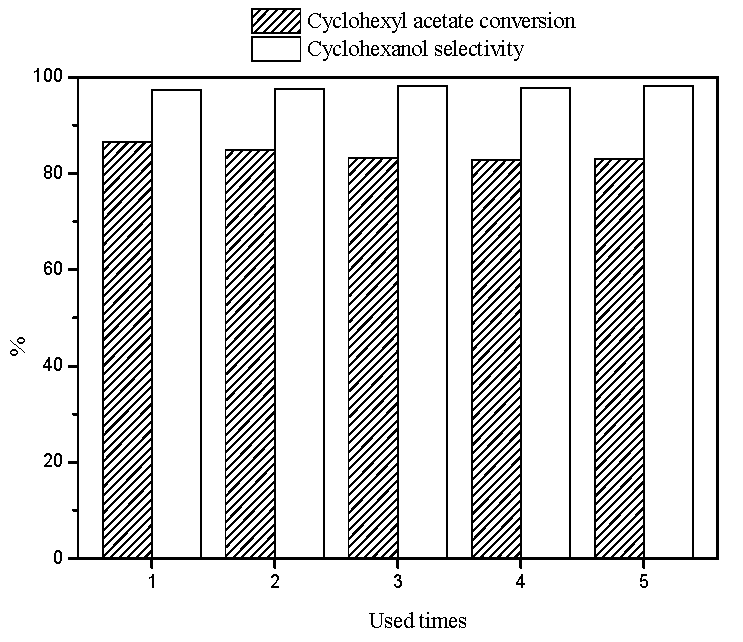