Comparative Study of Structure-Property Relationships in Polymer Networks Based on Bis-GMA, TEGDMA and Various Urethane-Dimethacrylates

The effect of various dimethacrylates on the structure and properties of homo- and copolymer networks was studied. The 2,2-bis-[4-(2-hydroxy-3- methacryloyloxypropoxy)phenyl]-propane) (Bis-GMA), triethylene glycol dimethacrylate (TEGDMA) and 1,6-bis-(methacryloyloxy-2-ethoxycarbonylamino)-2,4,4-trimethylhexane (HEMA/TMDI), all popular in dentistry, as well as five urethane-dimethacrylate (UDMA) alternatives of HEMA/TMDI were used as monomers. UDMAs were obtained from mono-, di- and tri(ethylene glycol) monomethacrylates and various commercial diisocyanates. The chemical structure, degree of conversion (DC) and scanning electron microscopy (SEM) fracture morphology were related to the mechanical properties of the polymers: flexural strength and modulus, hardness, as well as impact strength. Impact resistance was widely discussed, being lower than expected in the case of poly(UDMA)s. It was caused by the heterogeneous morphology of these polymers and only moderate strength of hydrogen bonds between urethane groups, which was not high enough to withstand high impact energy. Bis-GMA, despite having the highest polymer morphological heterogeneity, ensured fair impact resistance, due to having the strongest hydrogen bonds between hydroxyl groups. The TEGDMA homopolymer, despite being heterogeneous, produced the smoothest morphology, which resulted in the lowest brittleness. The UDMA monomer, having diethylene glycol monomethacrylate wings and the isophorone core, could be the most suitable HEMA/TMDI alternative. Its copolymer with Bis-GMA and TEGDMA had improved DC as well as all the mechanical properties. View Full-Text
Keywords: dental resin; urethane-dimethacrylate; Bis-GMA; TEGDMA; microgel agglomerates; degree of conversion; mechanical properties; morphology; fracture behavior; SEM dental resin; urethane-dimethacrylate; Bis-GMA; TEGDMA; microgel agglomerates; degree of conversion; mechanical properties; morphology; fracture behavior; SEM
►▼ Show Figures 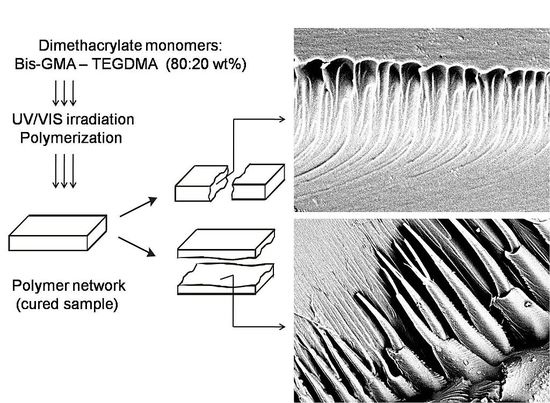 Barszczewska-Rybarek, I.; Jurczyk, S. Comparative Study of Structure-Property Relationships in Polymer Networks Based on Bis-GMA, TEGDMA and Various Urethane-Dimethacrylates. Materials 2015, 8, 1230-1248.


Barszczewska-Rybarek I, Jurczyk S. Comparative Study of Structure-Property Relationships in Polymer Networks Based on Bis-GMA, TEGDMA and Various Urethane-Dimethacrylates. Materials. 2015; 8(3):1230-1248.