Surface modification with oxide nanostructures is one of the efficient ways to improve physical or biomedical properties of shape memory alloys. This work reports a fabrication of highly ordered Ti-Ni-O nanotube arrays on Ti-Ni alloy substrates through pulse anodization in glycerol-based electrolytes. The effects of anodization parameters and the annealing process on the microstructures and surface morphology of Ti-Ni-O were studied using scanning electron microscope and Raman spectroscopy. The electrolyte type greatly affected the formation of nanotube arrays. A formation of anatase phase was found with the Ti-Ni-O nanotube arrays annealed at 450 °C. The oxide nanotubes could be crystallized to rutile phase after annealing treatment at 650 °C. The Ti-Ni-O nanotube arrays demonstrated an excellent thermal stability by keeping their nanotubular structures up to 650 °C.
Keywords: TiNi alloy; anodization; nanotubes; thermal stability; Raman TiNi alloy; anodization; nanotubes; thermal stability; Raman

TiO2 is one of the main semiconducting materials used for a variety of applications including photocatalysts, gas sensors, water purification and solar energy applications [1–4]. However, TiO2 is well-known as an n-type semiconductor with a wide band gap. It can only absorb in the UV regime and thus significantly limits its widespread application [5,6]. In order to improve the electrical and structural properties of TiO2 and thus broaden its application field, various kinds of decoration techniques have been carried out. Among the diverse approaches, doping of the oxide is one of the most efficient ways to obtain improved physical and chemical properties. For example, many metal elements (Fe, Cu, Cr, etc.) [7–9], and nonmetal elements (B, C, N, etc.) [10–12], have been used as dopants.

In order to investigate the effect of fluoride concentration on the formation of nanotube arrays, non-aqueous electrolyte containing lower fluoride species was also evaluated. Figure 2 shows the top view and cross section images of as-anodized oxide nanostructures fabricated at different pulse voltages in the non-aqueous electrolyte of 5% ethylene glycol/glycerol containing 0.30 M (NH4)2SO4 and 0.2 M NH4F. When the Ti-Ni substrate was anodized at 30 V, the top surface of the oxide layer presented uniform nanoporous structures. When the anodization voltage was increased to 40 V, highly ordered Ti-Ni-O nanotube arrays could form. As shown in Figure 2b,c, the average inner diameter and length of the nanotubes were 55 and 450 nm, respectively. When the Ti-Ni foil was anodized at 50 V, the top surface of the Ti-Ni-O nanotube arrays appeared partially damaged because of a rapid chemical dissolution reaction. However, self-organized nanotube arrays were still apparent.

Figure 4 shows EDX pattern of the as-annealed Ti-Ni-O nanotubes grown on Ti-Ni alloy substrates. The Ti-Ni-O was mainly composed of Ti, Ni and O elements. As shown in Table 1, atomic percentages of the Ti, Ni and O elements were 26.26%, 6.83% and 66.87%, respectively. The atomic percentages of Ni and Ti elements in the as-annealed Ti-Ni-O films were much lower than those in the original Ti-Ni alloy substrate. Furthermore, the Ni content was also much lower than the Ti content in the as-annealed Ti-Ni-O films. This phenomenon could be explained by considering the difference in the dissolution rate for different kinds of oxides during the anodization process. Ni oxide could be easily dissoluted in the electrolyte solution [19,20].

For the oxide nanotubes fabricated here, the Raman bands of the Ti-Ni-O did not appear at the same frequencies as those of the undoped TiO2 because the Ni-doping had changed the vibrational modes of TiO2. For the as-annealed Ti-Ni-O nanotubes, the Raman peaks around 146, 244, 288, 406, 437 and 607 cm−1 could be detected (Figure 5). The peak at 146 cm−1 and a small shoulder around 406 cm−1 corresponded to the anatase phase. The peaks found at 244, 437 and 607 cm−1 corresponded to rutile phase. The peak at 288 cm−1 should be attributed to titanate bands [23,24]. Obviously, both the anatase and rutile phases could coexist in the Ti-Ni-O nanotube layer after the heat-treatment at 500 °C.

Figure 6 presents Raman spectra of the as-anodized Ti-Ni-O nanofilms annealed at 450, 500, 600, 650, 700 and 800 °C. For the samples annealed at 450 °C Raman peaks around 147, 406 and 628 cm−1 could be detected. These three peaks should correspond to Eg, B1g, Eg of the Raman-active modes of anatase phase. The broad peak around 436 cm−1 and the small shoulder around 607 cm−1 should correspond to the Eg and A1g modes of rutile phase. The above results indicated that the phase transformation between anatase phase and rutile phase could start at 450 °C. With increase of the heat-treatment temperature to 600 °C, the peaks around 443 and 609 cm−1 (corresponding to rutile phase) could be also found. This reveals that the anatase phase could gradually transform to rutile phase with increase of the heat-treatment temperature. The rutile modes became stronger while the anatase modes got weaker.

After annealing at 650 °C, a new peak around 244 cm−1 appeared distinctly. The Ti-Ni-O demonstrated nearly all of the Raman features of the rutile phase, which indicated that the anatase–rutile transformation was almost completely finished. As the heat-treatment temperature increased to 700 and 800 °C, all of the Raman peaks corresponding to rutile phase became stronger. For the nanotube samples annealed at 800 °C, the titanate peaks around 288 and 706 cm−1 were much stronger than those of the samples annealed at 500 °C [23–25].

To investigate the deformation capability of the Ti-Ni-O nanotubes grown on the shape memory alloy, the substrate with as-annealed nanotubes was bent about 80° for five cycles. Figure 7 shows the deformation of the nanotube arrays after the above bending test. As shown in Figure 7a, the Ti-Ni-O film at the most bent area demonstrated a good anti-bending capability by showing partial cracking at local regions and most of the regions did not peel off from the alloy substrate. A closer examination of the cracked areas (Figure 7b) also revealed that the ceramic nanotube arrays could demonstrate a remarkable nanoscale cracking characteristics by showing weak-link cracking behaviors. Obviously, the Ti-Ni-O nanotubes here could have a remarkable deformation ability to withstand severe deformation.

The Ti-Ni-O nanotube arrays grown on the shape memory alloy are expected to find wide applications in both industrial and biomedical occasions. For a real application, mechanical stability of the nanotube arrays has to be considered since a final deformation (such as 5% or 8%) of the shape memory alloy (NiTi substrate) will usually occur during applications. Although the nanotublular oxide film could demonstrate unusual plastic deformation capability due to a nanoscale or nanoporous effect of nanoceramics, deformation behavior of the Ti-Ni-O nanotubes should be further investigated to address such a potential mechanical stability problem. Optimization of the oxide thickness, heat-treatment temperature as well as substrate type (plate or wire) should be realized to minimize a mechanical failure of the nanotube/NiTi alloy system without sacrificing the favorable shape memory effect.

Prior to anodization, all of the Ti-Ni alloy (atomic ratio of Ti and Ni elements was 1:1) samples were ground and polished with 2000# SiC emery papers, and then ultrasonically cleaned with absolute alcohol. Finally, they were rinsed with deionized water and dried in a N2 stream. Anodic samples were fabricated with different pulse voltages with a constant frequency of 4000 Hz and duty cycle of 50% for 180 min. We used two kinds of electrolytes, i.e., 5% ethylene glycol/glycerol containing 0.30 M (NH4)2SO4 and 0.4 M NH4F, and 5% ethylene glycol/glycerol containing 0.30 M (NH4)2SO4 and 0.2 M NH4F. The as-anodized Ti-Ni-O samples were annealed at different temperatures varying from 450 to 800 °C for 1 h to investigate phase transformation of the Ti-Ni-O.

This work was supported by Shanghai Pujiang Program (No. 07pj14047). We thank the contribution from SEM lab at Instrumental Analysis Center of SJTU. 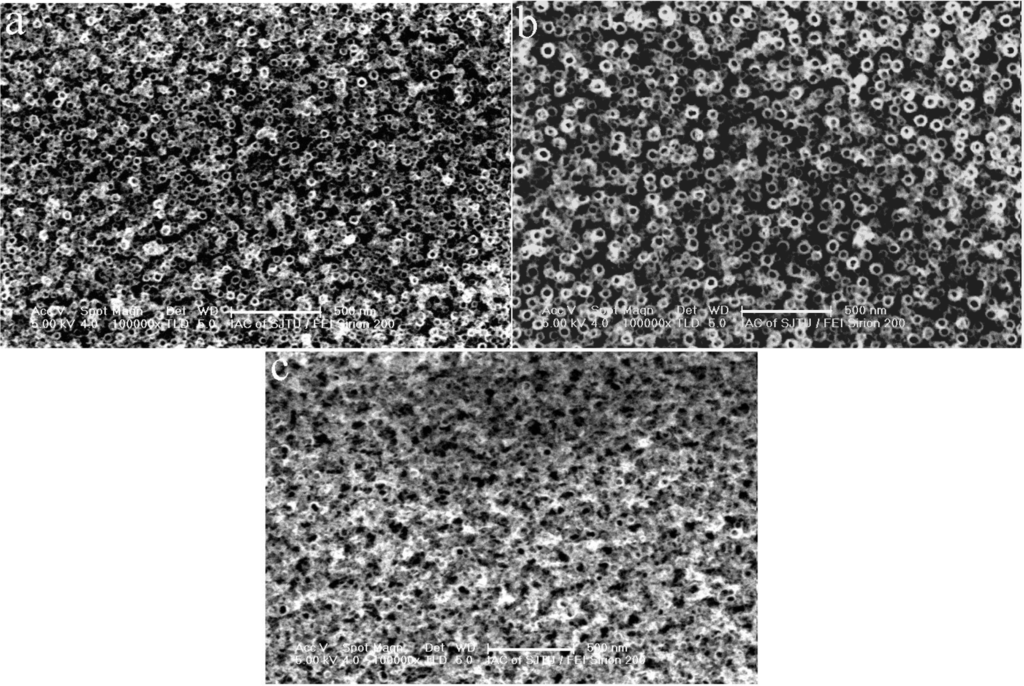 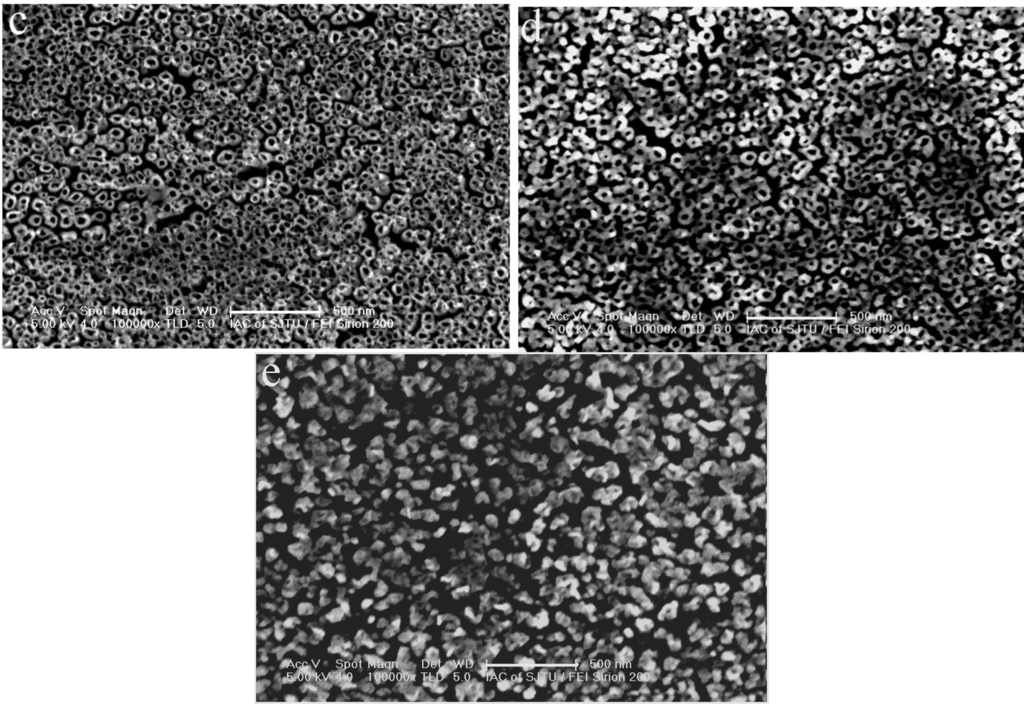 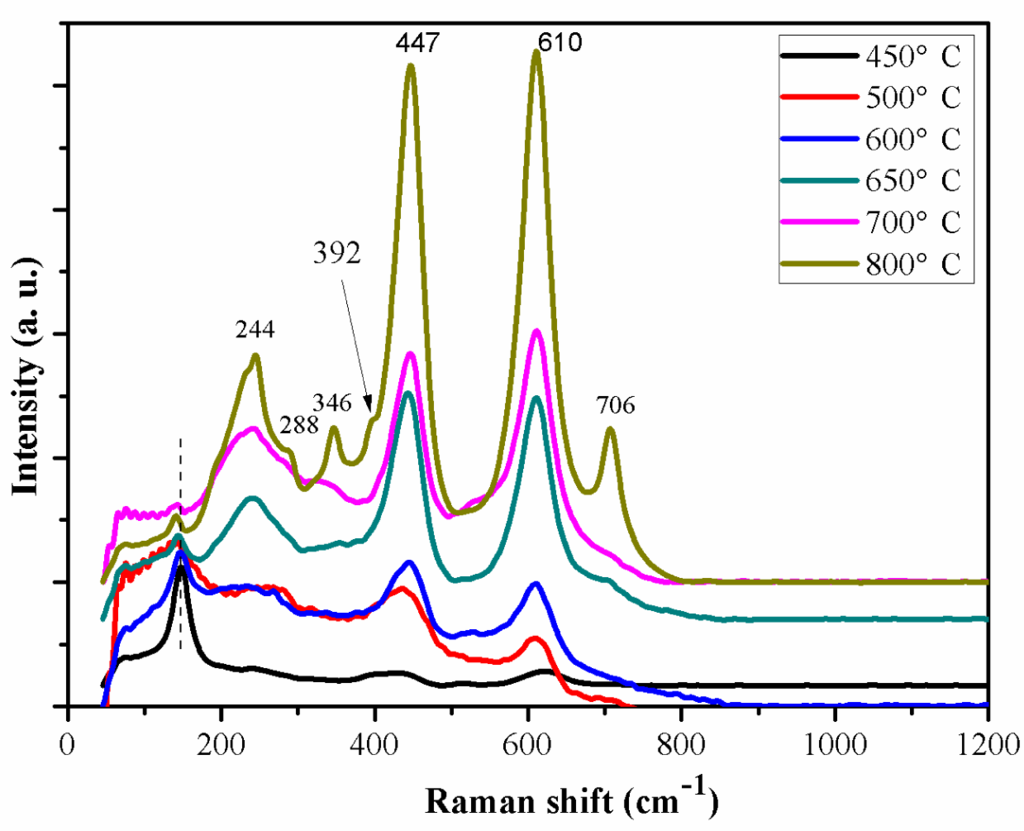