Deep Eutectic Solvents (DESs): Preliminary Results for Their Use Such as Biocides in the Building Cultural Heritage
Previous Article in Journal

Preliminary Study of the Mural Paintings of Sotterra Church in Paola (Cosenza, Italy)

A multi-analytical approach was employed to study wall paintings located in the Sotterra church at Paola, in the province of Cosenza, Italy. The site is an underground church (hence the name of Sotterra, which means “under the earth”) rediscovered in the second half of the 19th century, during the building works of the Madonna del Carmine church on the same area. This underground church preserves valuable mural paintings having different styles. The construction’s dating and overlapped modifications made until the site was abandoned is also debated. A wall painting, depicting “The Virgin” as part of the “Annunciation and the Archangel Gabriel” present on the opposite side of the apse, was selected and investigated using both in situ and laboratory-based analysis. Preliminarily, the non-destructive investigations involved several analytical techniques (IR imaging, UV-Induced Visible Fluorescence, and X-ray Fluorescence analyses) that provided mapping and characterization of pictorial layers and first data about deterioration phenomena. On the basis of this information, a more in-depth study was conducted on micro-fragments aimed at characterizing the stratigraphy and to identify the artist’s technique. Cross-sections were analysed using polarized optical microscopy and electron scanning microscopy coupled with energy-dispersive X-ray spectroscopy to obtain morphological and chemical information on the selected pictorial micro-fragments of the wall painting. The results allowed to characterize the pigments and provide better readability of the whole figure, revealing details that are not visible to the naked eye, important for future historical-artistic and conservative studies. The results represent the first step of a systematic archaeometric research aimed at supporting the ongoing historical-stylistic studies to distinguish the different building phases hypothesized for this religious site which remained buried for three centuries. View Full-Text
Keywords: Sotterra church; mural paintings; frescoes; non-destructive analyses; pigments; infrared imaging; stratigraphy Sotterra church; mural paintings; frescoes; non-destructive analyses; pigments; infrared imaging; stratigraphy
►▼ Show Figures 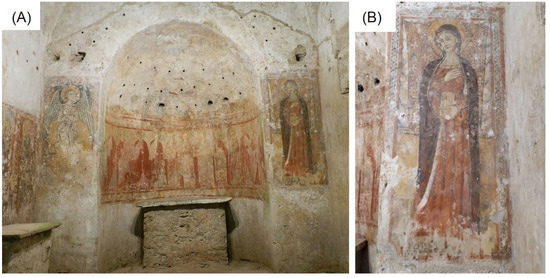