Nickel-titanium (NiTi) alloys have been employed in the production of handheld endodontic instruments since 1988 by machining orthodontic wire. The production of rotary endodontic instruments from NiTi wire blanks is still the primary method to this day [1,2]. In brief, NiTi rotary instruments are produced by vacuum melting or casting of equiatomic NiTi alloy (56% (weight [wt]) nickel and 44% (wt) titanium), which is then press-forged into a cylindrical shape, followed by a complex sequence of swaging, rolling, drawing, descaling, annealing and profiling the wire into its desired shape [1]. In addition to innovations in instrument design and morphology, several proprietary processing procedures for NiTi rotary endodontic instruments have been developed over the last decade to improve their mechanical properties [3].
The two temperature-dependent crystal structures in which near to equiatomic NiTi alloy can exist are austenite (high temperature phase with cubic B2 crystal structure) and martensite (low-temperature with monoclinic B19′ crystal structure) [3,4]. Both stress and temperature can induce the austenite-to-martensite transition (martensitic transformation), and it is this transition that gives NiTi its characteristic properties of superelasticity (SE) and shape memory effect (SME) [3]. SE is the complete recoverable elastic deformation (within 8% strain limit) due to the phase transformation between stable austenite and the stress-induced martensite phase, whereas SME is the ability of deformed NiTi to revert to its original shape as a result of phase transformation from heating stable deformed martensite to austenite [1,3]. Under certain conditions, a “pre-martensitic transition” with a rhombohedrally distorted phase (R-phase) can precede the martensitic transformation [5], and one of these conditions is met via a process of heating and cooling NiTi in their austenitic state [6], as R-phase transformations tend to occur when precipitates or dislocations exist. [7] Transformations between cubic, rhombohedral and monoclinic lattice structures are summarized in Figure 1 and Figure 2.
If a NiTi alloy is above the austenitic finish temperature (Af), it is considered austenitic, which is stiff, hard and possesses superior SE properties [3,7]. If the temperature is below the martensitic finish temperature (Mf), the NiTi alloy is soft, ductile and possesses SME [3,7]. Given the ability for martensite to reorient itself in its twinned R-phase structure, martensite exhibits superior cyclic fatigue resistance [3,4,8], and is therefore considered more desirable when the preparation of curved root canals is required.
The present study hypothesized that different types of post-manufacture heat treatment would affect material constants in a specific pattern and align with changes in transformation temperatures. Microtensile tests and differential scanning calorimetry (DSC) were employed to study the effects of thermal processes on the mechanical and metallurgical properties of NiTi alloys.

Four different types of NiTi wire specimens were sourced from Dentsply Maillefer (Ballaigues, Switzerland). All samples were manufactured to a 0.4 mm cross-sectional diameter and a total length of 16 mm, of which the central 10 mm portion was sized to the relevant gauge; samples for three groups had then been subjected to typical post-manufacture heat treatment. The shape and dimensions of the wires were based on materials described in a previous study [9]. The wire type and the corresponding proprietary endodontic instrument brands are detailed in Table 1, while the dimensions are detailed in Figure 3. The ends of the wire samples had been milled to a larger diameter to facilitate the grip mechanism for the uniaxial test machine. Of note, “Superflex” is an undisclosed proprietary NiTi type that has been used in the fabrication of the TruNatomyTM (Dentsply Sirona, Charlotte, NC, USA) instrument.

Two custom-made stainless steel grips were used in a microtensile test rig (UniVert, CellScale, Waterloo, ON, Canada) to attach the wire specimens. Stainless steel tubes were milled to fit the actuator and base components of the UniVert machine and aligned rigidly in the same axis of the actuator. The tester was fitted with a water bath, a heating plate and a temperature sensor to provide a pre-selected ambient temperature (Figure 4 and Figure 5). An externally placed thermocouple with an accuracy of ±0.1 °C was used to monitor the temperature of the water bath and to ensure that this was maintained at ±1.0 °C.
Three samples of each wire type (Stock, Gold, Blue, Superflex) were tested at one of three temperatures: cold (12.5 °C), room temperature (25 °C), and body temperature (37.5 °C). A 200 N load cell at an extension rate of 0.1 mm per minute was selected as detailed in ASTM E8/E8M-21 [10]. Each sample was examined at 25× magnification to ensure that no pre-existing defects were present. Stress values were derived from the output from the load cell (in Newtons) and converted to stress σ in megaPascals (MPa) by using the formula in Equation (1). where F is the load recorded by the load cell, and A is the circular cross-sectional area of the gauge length.
A digital image correlation (DIC) technique was used to obtain strain measurements. Images were captured using a high-resolution webcam (Logitech HD Pro Webcam C920, Logitech, Lausanne, Switzerland) at a rate of 1 Hz, which corresponded to output data from the UniVert (Figure 6). The extensions until ultimate tensile failure were analyzed using ImageJ software using the difference in pixels, converted to measurements in millimeters (mm) by calibration of images using fixed landmarks with known dimensions in the images. Using the formula in Equation (2), strain values were calculated. where ∆L is the change in length and L0 is the original gauge length of the wire (10 mm).
The stress and strain values were plotted and analyzed for austenitic and martensitic modulus of elasticity (Ea and Em, respectively). Values for maximum transformation strain (%), transformation stress [σA-M] (MPa) and ultimate tensile strength [σmax] (MPa) were also derived.
Data sets were first checked for normality of distribution via the Shapiro–Wilk test, and subsequently 2-way ANOVA and Tukey’s post hoc test for multiple comparisons were used (Prism version 9, GraphPad Software, San Diego, CA, USA). Two separate one-way ANOVA tests were performed to analyze the effect of temperature within each NiTi group, and the effect of the metallurgical types of NiTi at similar temperatures. The threshold for statistical significance was p < 0.05.
The following null hypotheses were proposed:

Three samples from each of the four wire types were used for DSC analysis. Sections of 3 mm in length were cut carefully off and weighed to an accuracy of ±0.001 mg before being placed in a standardized 40 µL aluminum crucible (Mettler Toledo, Greifensee, Switzerland), and sealed non-hermetically with the Mettler Toledo crucible sealing press. The samples were prepared so that they had a mass of between 10–12 mg, and as such the thickened end of the wires was used for each specimen to meet the weight requirements for DSC. An empty aluminum crucible was used as the reference pan.
Each sample was placed in the DSC unit (DSC 1 STARe system, Mettler Toledo) along with the reference pan. The temperature range varied from −60 °C to +60 °C. Liquid nitrogen was used to achieve sub-ambient temperature conditions. The heating and cooling cycles followed the protocol described in de Vasconcelos et al., 2016 [11]. The samples were first heated to +60 °C, then cooled to −60 °C at a rate of −10 °C/min, and then immediately heated back to +60 °C at a rate of +10 °C/min, with one cycle per sample.
All DSC data were analyzed using STARe Evaluation software (Mettler Toledo). The onset and endset transformation temperatures were obtained from the intersection between extrapolations of the baseline and maximum gradient line of the lambda-type DSC curve [12,13], with four main points determined: martensitic transformation starting (Ms), finishing (Mf) and austenitic (reverse-martensitic) starting (As) and finishing (Af).

The four wire types had different transformation temperatures (Table 5). Stock and Gold wires samples showed clear austenitic and martensitic transformations, whereas Blue and Superflex wire samples included some intermediate phases, suggestive of R-phase transition phases. The Blue wire showed a small transition peak at around 21.3 °C, with a major peak at 31.8 °C.
The Stock NiTi alloy displayed the expected austenite-martensite phase transformation centered close to 0 °C (Figure 8). Gold, Blue and Superflex samples all showed much higher temperature austenitic and martensitic transformations than the Stock NiTi alloy. The Blue wire showed a small transition peak in the reverse martensitic phase at around 21.3 °C, with its major peak at 31.8 °C. The Superflex wire presented two very pronounced peaks in the reverse martensitic phase, with the first peak at 20.9 °C and the second peak at 26.9 °C.

The present study examined the effect of temperature on tensile testing of various NiTi specimens by using a novel experimental setup with a temperature-controlled water bath.

This research has received funding from the Australian Dental Research Foundation (Grant No. 0072-2021).

The authors would like to acknowledge Abdalla A. Ali, Sanjay Govindjee, Nicolas Crevoisier and Jean-Charles Giachetto for their input on the interpretation of data of the microtensile experiments. The authors would also like to thank Jenny Cheon for her schematic diagrams for Figure 4 and Figure 6.

The wire specimens used in this study were donated by Dentsply Maillefer (Ballaigues, Switzerland). Ove A. Peters has served as a consultant for Dentsply Sirona in the past; Philip Y-H Chien, Jorge N.R Martins, Laurence J. Walsh deny any conflict of interest. 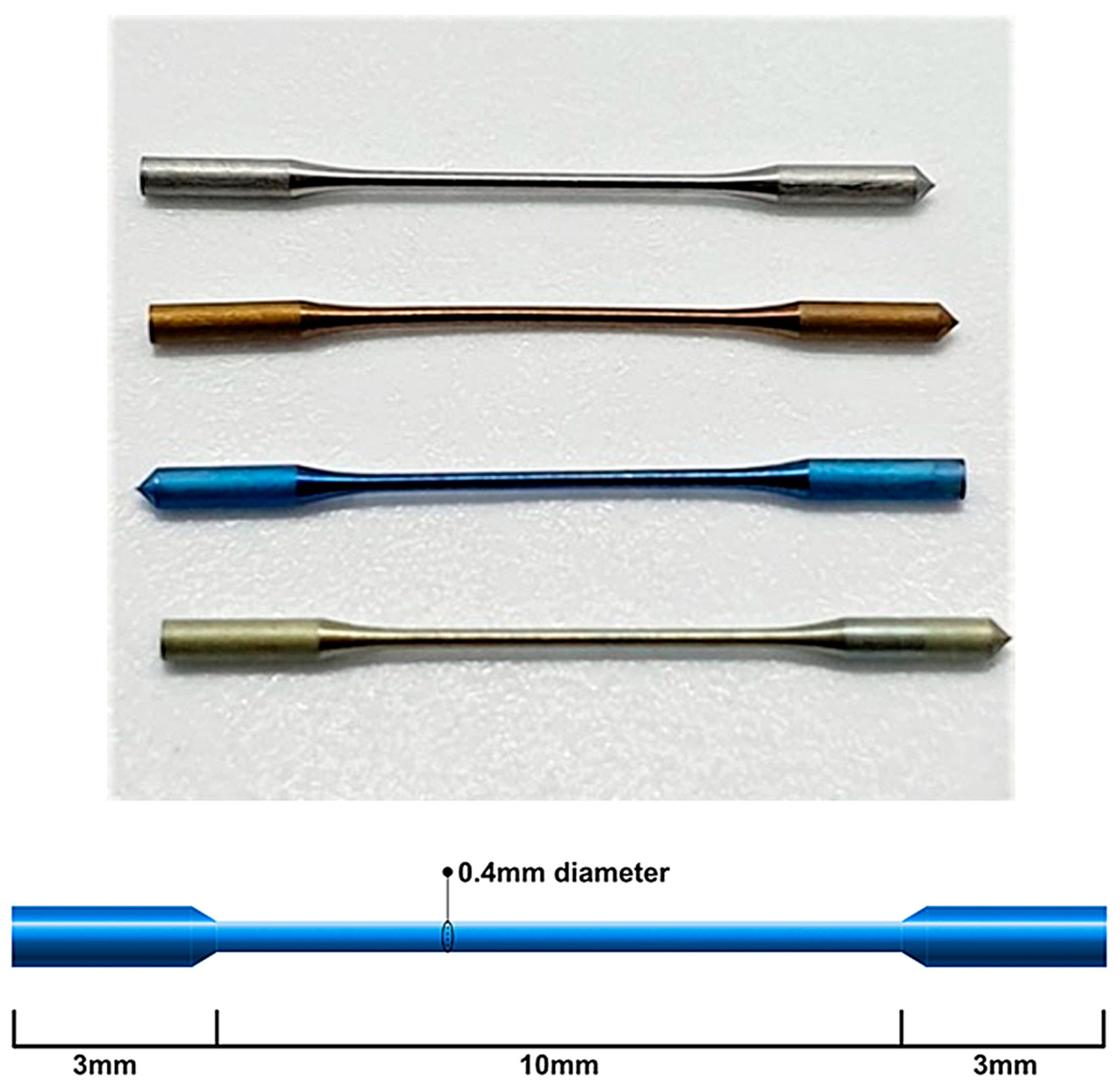 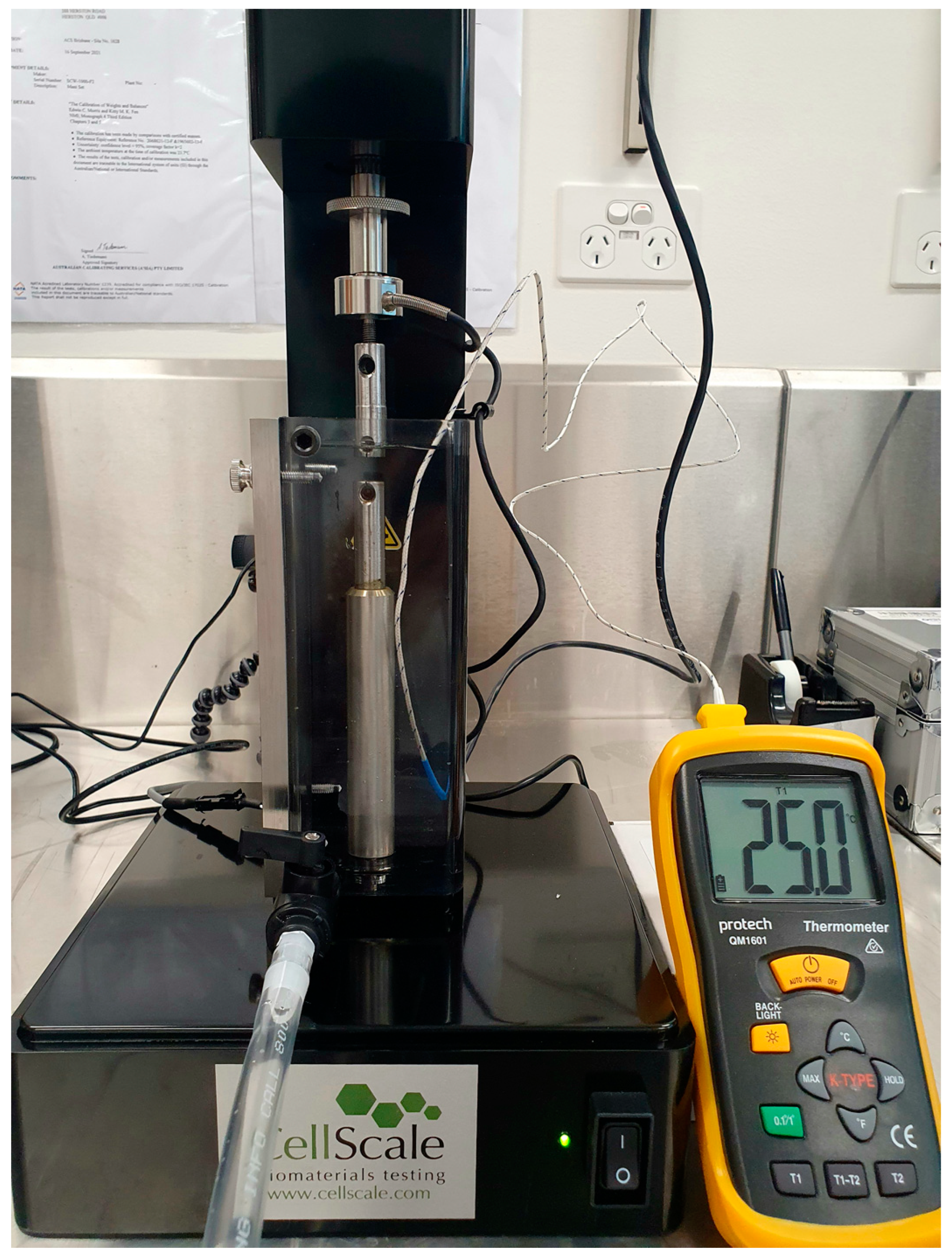 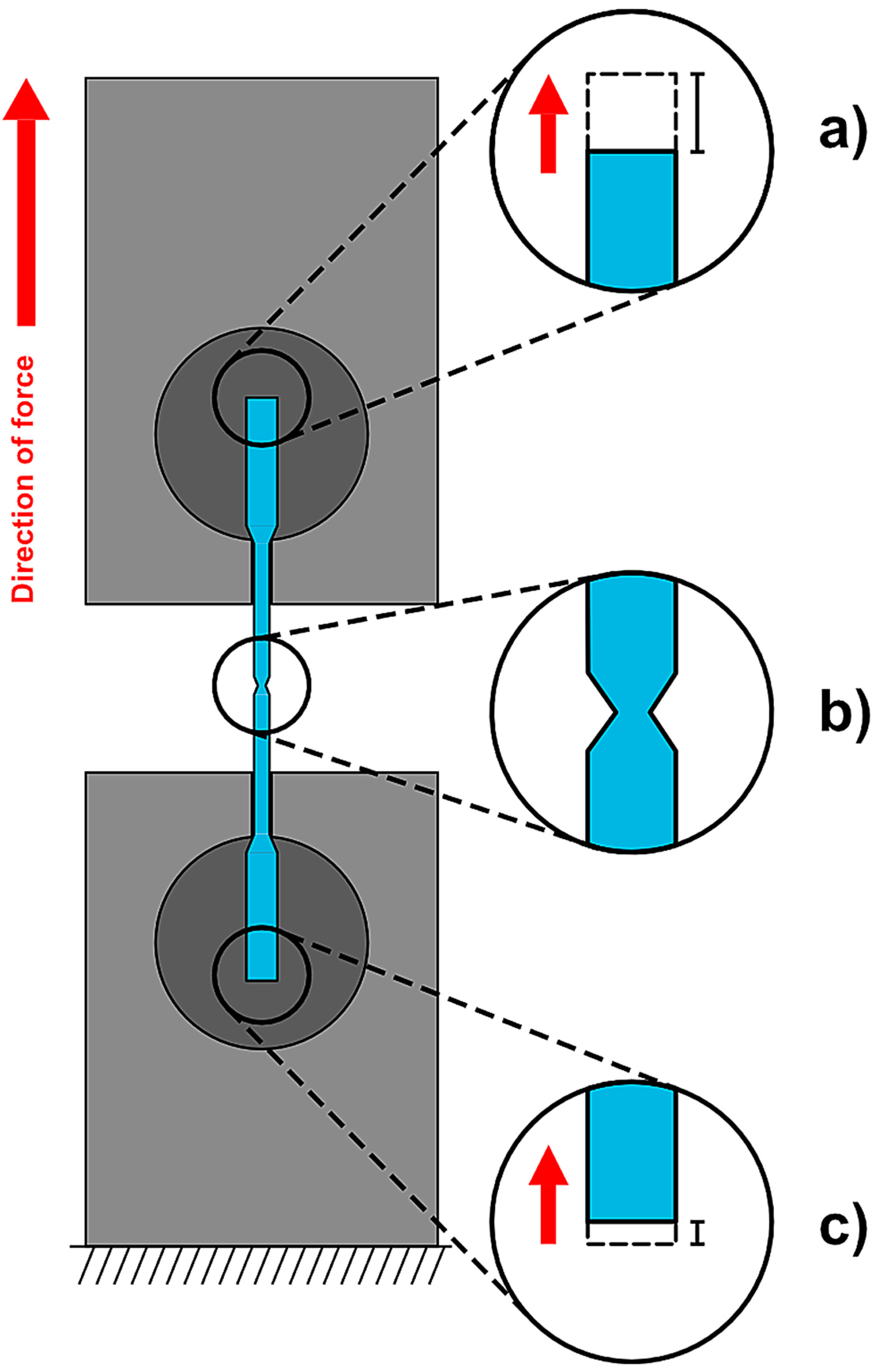 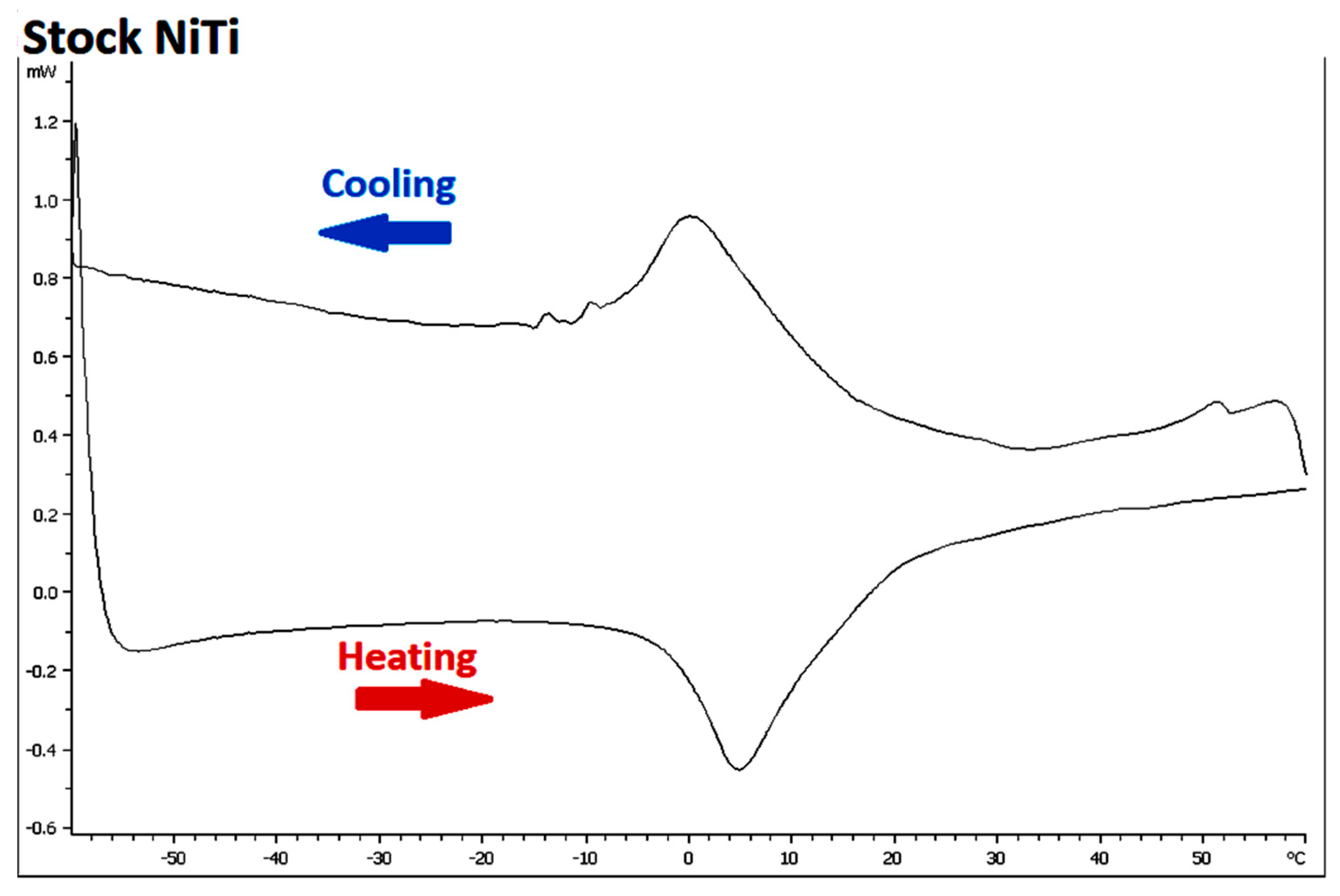 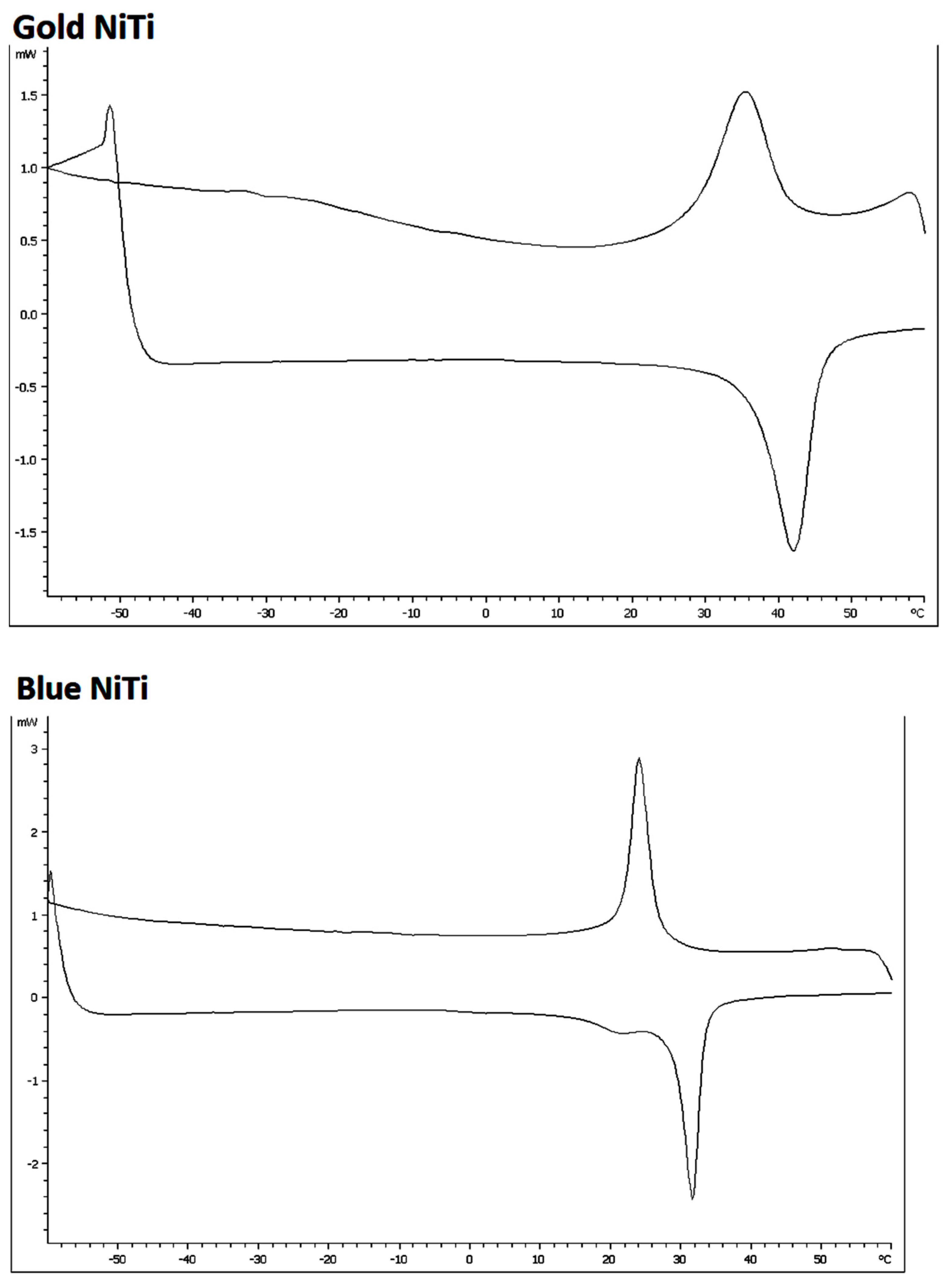 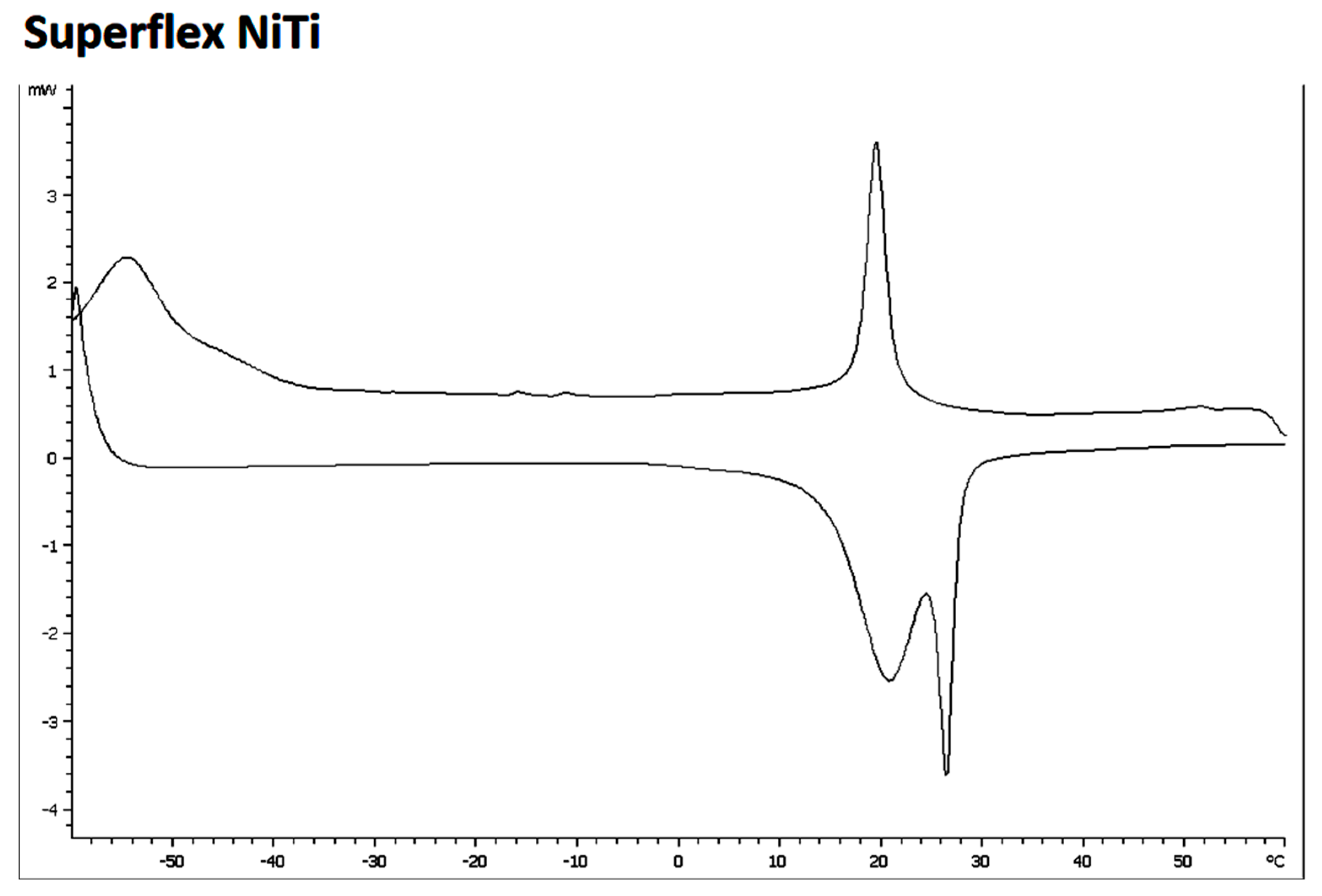