Effects of Yttrium Doping on Erbium-Based Hydroxyapatites: Theoretical and Experimental Study
Next Article in Special Issue

The Sn–5Zn, Sn–9Zn and Sn–15Zn alloys were prepared by melting Sn and Zn lumps (Camex, Měšice, Czech Republic) in pre-weighted concentrations. The melting was conducted in an induction furnace (Rajmont, Hradec Králové, Czech Republic) in an argon-protected atmosphere. Alumina crucibles (diameter 30 mm, Brisk, Tábor, Czech Republic) were used for sample mounting. After melting, the alloys were solidified to form cast cylinders. The as-cast alloys were subsequently ground with grades 600 and 1200 SiC papers to achieve flat surfaces. Furthermore, the alloys were polished with monocrystalline diamond suspension down to 1 μm surface roughness. The surface roughness of 1 μm was required by the standard for electrochemical corrosion testing to eliminate the negative effects of scratches and grooves induced by grinding [33]. The alloys’ microstructures were studied using a JEOL JSM-7600F scanning electron microscope (SEM, JEOL Ltd., Tokyo, Japan). A back-scattered electron mode (BSE) was used for imaging. The chemical composition of the alloys was studied with an Oxford Instruments (Bucks, UK) energy-dispersive X-ray spectrometer (EDS) using a Si(Li) detector X-Max 50 mm2 integrated into SEM. The spectrometer was operated by INCA software (Oxford Instruments NanoAnalysis, Bucks, UK). The hardness of the polished alloys was measured on a ZWICK 3212 testing machine (ZwickRoell, Brno, Czech Republic) with a load of 9.81 N and an indentation time of 15 s. Five measurements per alloy were made. Average hardness and standard deviations were calculated from individual measurements for each Sn–Zn alloy.
The phase constitution of the as-cast alloys was studied using a Philips PW 1830 X-ray diffractometer (XRD, Malvern Panalytical Ltd., Malvern, UK). The diffractometer worked with Bragg–Brentano geometry and used CoKα1,2 as a radiation source. Diffraction measurements were carried out in a 2-Theta range between 20° and 80°. A step size of 0.05° and a counting time of 98 s per step were used during diffraction experiments. The X-ray radiation was generated at 40 kV and 40 mA.
The polished alloy surfaces (surface area 530 mm2) were subjected to electrochemical corrosion testing at room temperature (21 ± 2 °C). The experiments were conducted in a 0.5 L double-walled vessel with a working electrode (Sn–Zn alloy), reference electrode and counter electrode, respectively. An Ag/AgCl electrode suspended in a saturated KCl solution served as a reference electrode. A platinum sheet (20 × 20 mm2) was used as a counter electrode. The corrosion experiments were carried out in aqueous HCl (1 wt.%) and NaCl (3.5 wt.%) solutions. The solutions were prepared by dissolving the respective weighted amounts of HCl and NaCl in deionized water. The solutions were not de-aerated before the experiment to simulate real environmental conditions the alloys may experience in service. The corrosion measurements were controlled with a PGU 10 V-1A-IMP-S potentiostat/galvanostat from Jaissle Electronic Ltd. (Waiblingen, Germany). An open circuit potential (OCP) of the alloys was recorded first, immediately after the sample immersion in the electrolyte. After stabilization, an electrochemical polarization was initiated using a sweeping rate of 1 mV s−1. The potential range of each polarization experiment was selected according to the OCP of the alloy. It covered a minimum of 500 mV around the OCP on both cathodic and anodic sides. The obtained polarization curves were analyzed by Tafel extrapolation [34]. By using this method, corrosion current densities and corrosion potentials of the alloys were obtained. Subsequently, the corrosion rates were calculated from the experimental corrosion current densities using Faraday’s electrolysis laws. After polarization, the microstructures and chemical compositions of the corroded alloy surfaces were studied using SEM and EDS.

3.1. Phase Constitution and Microstructure of the Alloys before Corrosion

The phase constitution of the Sn–xZn alloys was studied by room-temperature X-ray diffraction. The XRD patterns of the alloys are presented in Figure 1. The XRD patterns of pure metals (Sn and Zn) are included in the same figure for comparison. The XRD patterns of Sn–xZn alloys (x = 5, 9, 15 wt.%) were found to be composed of Sn and Zn. The peaks of Sn could be assigned to Sn(01-086-2265). The peaks of Zn were assigned to Zn(01-078-9363). No other phases have been identified in the XRD patterns. Based on this observation, it can be concluded that minor phases were below the detection limit of the XRD instrument and constituted less than a few percent of the volume of the alloys [35,36]. The intensity of Zn peaks increased with increasing Zn concentration in the alloy (Figure 1). The intensity of the peaks was directly proportional to the Zn weight fraction. As such, the peak intensity was not significantly influenced by preferential grain orientation, internal stresses or other factors [37].
The microstructure of the as-cast alloys was inspected by SEM. The results are presented in Figure 2. The images were acquired in a BSE mode to yield element resolution. The Sn–5Zn alloy was composed of a light-colored dendritic microconstituent and a eutectic (Figure 2b). The Sn–9Zn alloy had a eutectic microstructure (Figure 2c). The Sn–15Zn alloy was composed of a dark microstructure constituent surrounded by the eutectic (Figure 2d). The chemical composition of the constituents was studied by EDS. The results are presented in Table 1. The light-colored microconstituent of the Sn–5Zn alloy was, based on its chemical composition and the corresponding XRD pattern, assigned to the solid solution of Sn. The solid solution of Sn is abbreviated as (Sn) in this paper. The solubility of Zn in (Sn) was less than 0.1% and could not be detected via EDS. The dark microstructure constituent of the Sn–15Zn alloy was identified as a solid solution of Zn. The solid solubility of Sn in (Zn) was less than 0.1%. The eutectic found in the Sn–xZn alloys had a chemical composition of approximately 9.1% Zn and 90.9% Sn (Table 1).
The microstructures of metallic Sn and Zn are given in Figure 2a,e. The microstructure of Sn was homogeneous (Figure 2a). The material was free of impurities, and only Sn was found by EDS. The microstructure of Zn is presented in Figure 2e. The material was heterogeneous. At the grain boundaries of Zn, isolated particles were detected (Figure 2f). The volume concentration of the particles was relatively small (less than 2 vol.%). As such, they could not be detected by XRD (Figure 1). The chemical composition of the particles was studied by EDS. The results are presented in Table 1. The particles contained approximately 95.1 wt.% Zn and 3.9 wt.% Fe. Small amounts of other elements were also detected (0.7 wt.% P and 0.3 wt.% Ti). Based on the chemical composition, the particles were assigned to FeZn13. FeZn13 is an intermetallic phase commonly observed in Zn-Fe alloys [38]. FeZn13 forms in Zn alloys due to the minimal solid solubility of Fe in (Zn). Zinc is often recovered from the furnace dust from galvanized steel-making plants [39]. As such, Fe impurities are difficult to avoid completely.

The hardness was measured on polished Sn–Zn alloy surfaces using the Vickers method [40]. The results are presented in Figure 3. An increase in hardness with an increasing amount of Zn was observed. Tin had the lowest hardness. With the addition of zinc, there was a gradual increase in hardness up to 12 HV1 for the eutectic alloy. This observation is in accordance with previously published studies [41,42]. The increase in hardness is caused by the addition of much harder Zn. Furthermore, a strengthening of the grain boundaries also takes place in the Sn–Zn alloys. After exceeding 9 wt.% Zn, the increase in hardness was not significant. This observation is related to the formation of a large, needle-like (Zn) phase present in the Sn–15Zn alloy (Figure 2d). It has been previously observed that the large (Zn) needles no longer contribute to alloy strengthening [30,43].

3.4. Inspection of Alloy Surfaces after Corrosion

In the present work, the microstructure, phase constitution and corrosion behavior of binary Sn–xZn alloys (x = 5, 9 and 15 wt.%) have been investigated. The corrosion experiments were carried out in aqueous HCl (1 wt.%) and NaCl (3.5 wt.%) solutions to study the effects of pH and pCl on corrosion behavior.
The study has contributed to the general understanding of the corrosion behavior of lead-free solder alloys in acidic environments. It has been shown that the corrosion resistance of the Sn–Zn alloys can be improved by decreasing the weight fraction of Zn in the alloy. This result might be useful for practical applications of Sn–Zn alloys. The Sn–Zn alloys are used either as lead-free solder alloys or protective coatings of steel. As such, they may be exposed to harsh conditions where frequent acid attacks are expected (chemical factories, atmosphere polluted with acid rains). The decrease of the Zn weight fraction in the alloy could be an option how to improve the corrosion resistance. Future efforts in corrosion studies of Sn–Zn alloys could be directed toward a fundamental understanding of metastable pitting formation and preferential zinc dissolution. These two phenomena significantly contribute to lowering corrosion resistance of Sn–Zn alloys in acidic and saline environments.

Data are available from the corresponding author upon request. 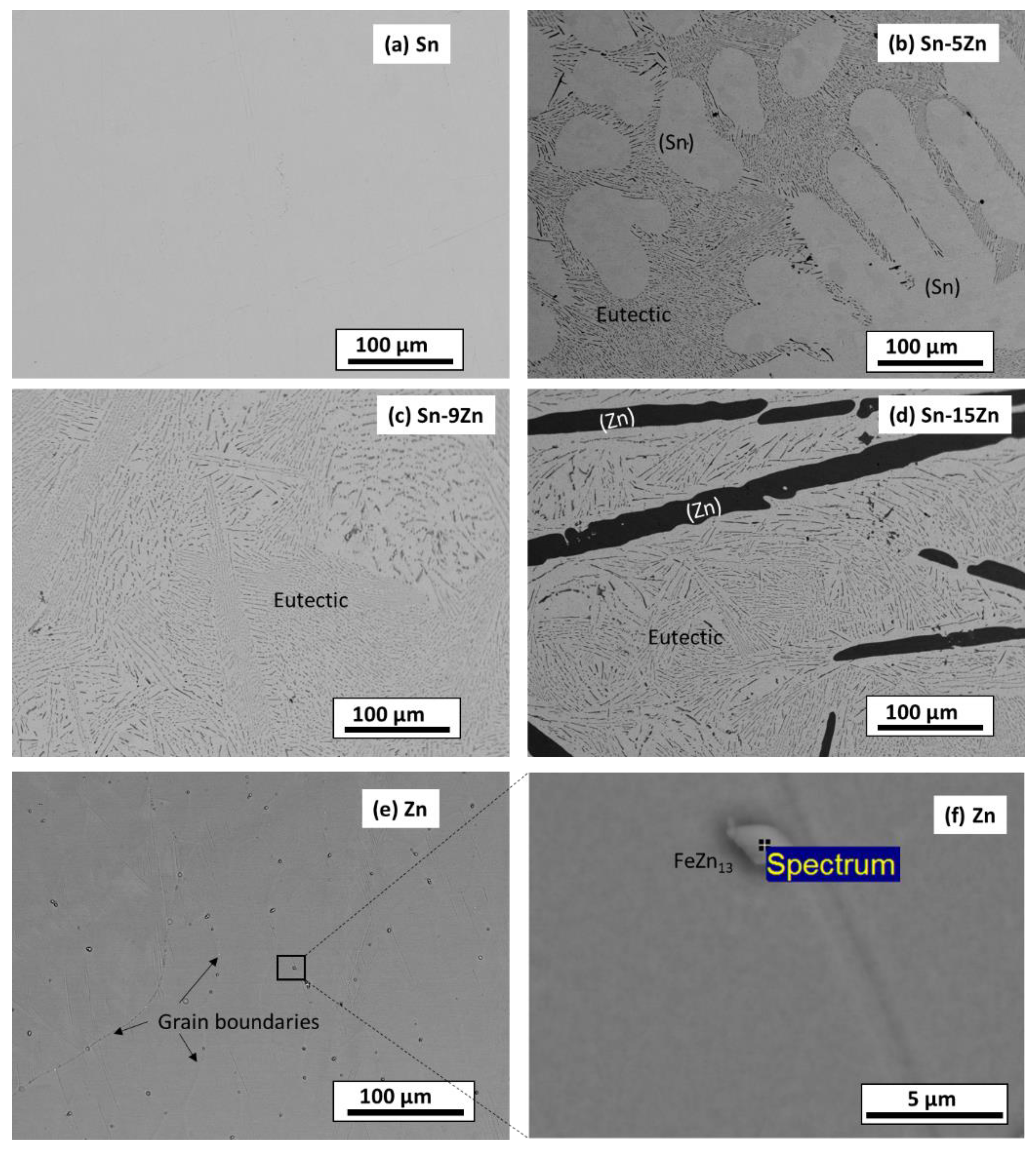 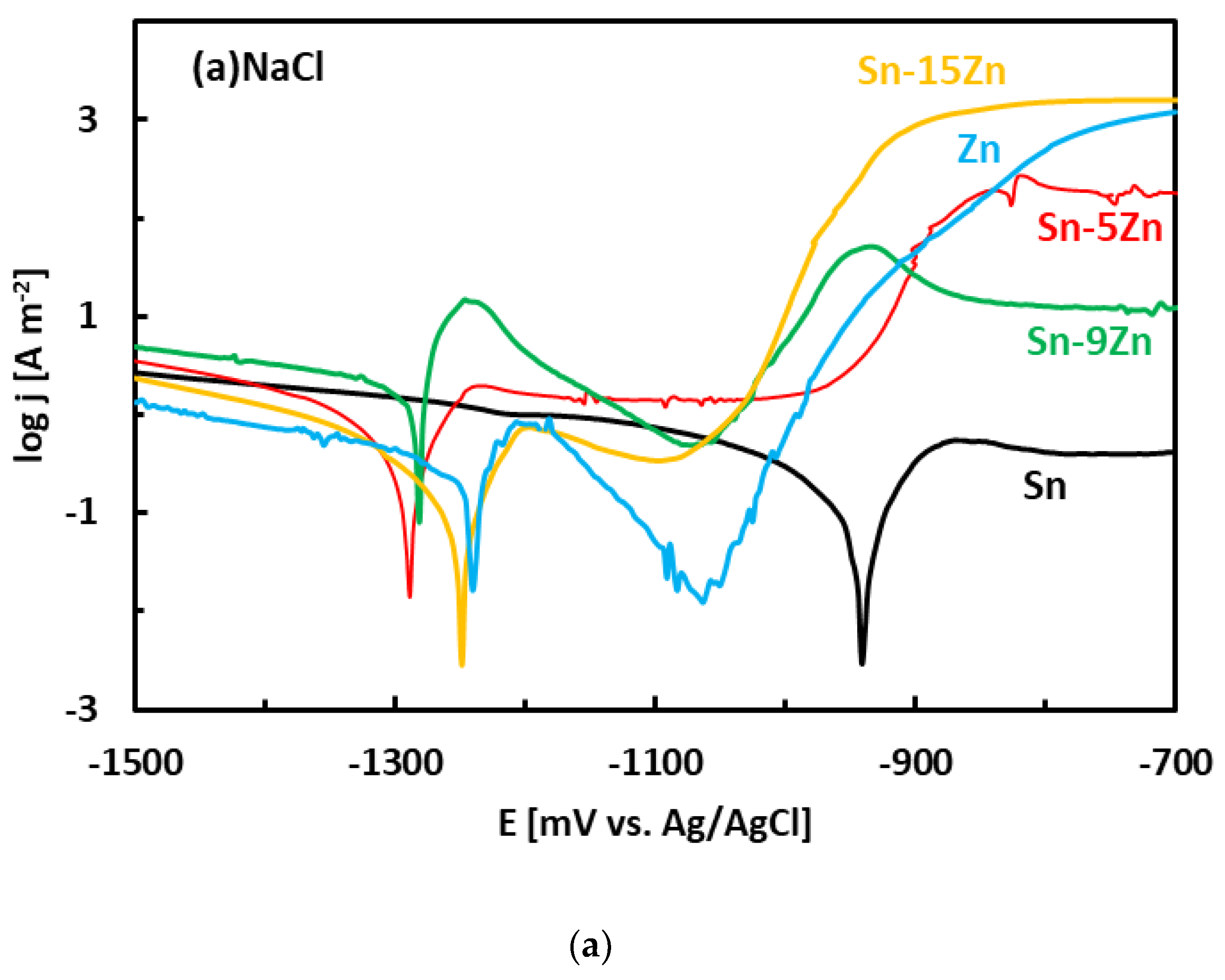 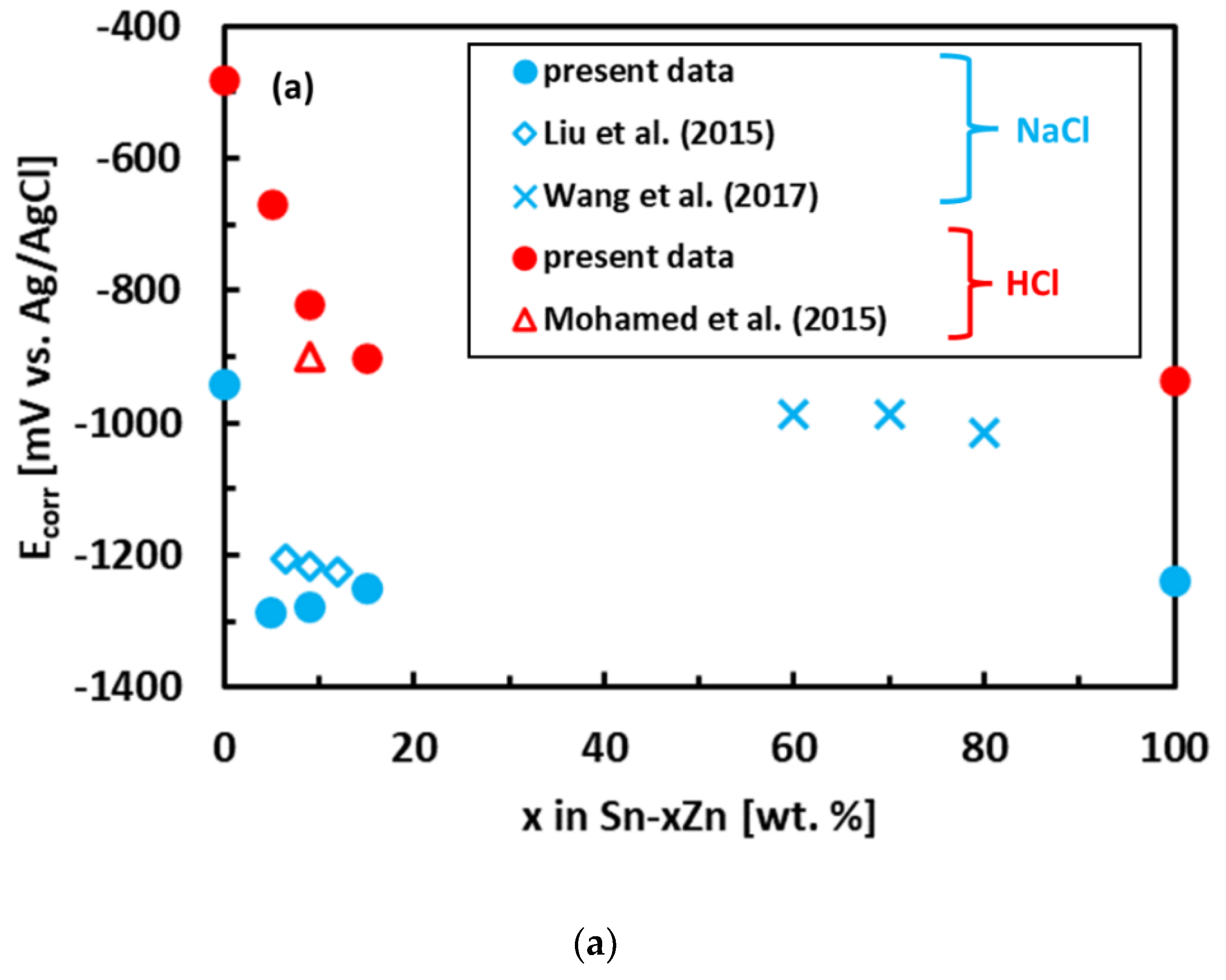 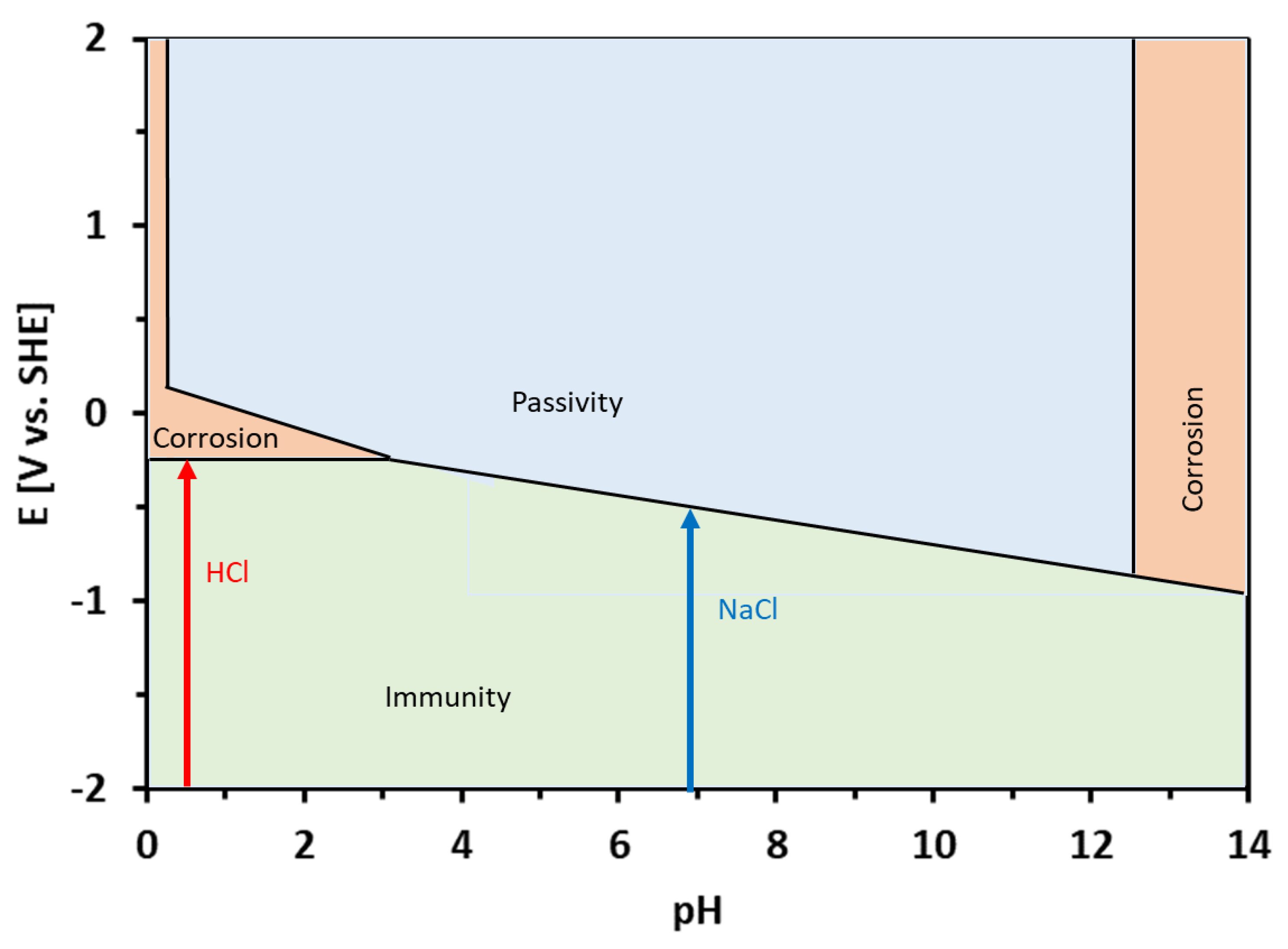