Effect of Sintering Temperature and Polarization on the Dielectric and Electrical Properties of La0.9Sr0.1MnO3 Manganite in Alternating Current
Next Article in Special Issue

:
Graphene is one of the most promising two-dimensional nanomaterials with broad applications in many fields. However, the variations and fluctuations in the material and geometrical properties are challenging issues that require more concern. In order to quantify uncertainty and analyze the impacts of uncertainty, a stochastic finite element model (SFEM) is proposed to propagate uncertainty for carbon atomic interactions under resonant vibration. Compared with the conventional truss or beam finite element models, both carbon atoms and carbon covalent bonds are considered by introducing plane elements. In addition, the determined values of the material and geometrical parameters are expanded into the related interval ranges with uniform probability density distributions. Based on the SFEM, the uncertainty propagation is performed by the Monte Carlo stochastic sampling process, and the resonant frequencies of graphene are provided by finite element computation. Furthermore, the correlation coefficients of characteristic parameters are computed based on the database of SFEM. The vibration modes of graphene with the extreme geometrical values are also provided and analyzed. According to the computed results, the minimum and maximum values of the first resonant frequency are 0.2131 and 16.894 THz, respectively, and the variance is 2.5899 THz. The proposed SFEM is an effective method to propagate uncertainty and analyze the impacts of uncertainty in the carbon atomic interactions of graphene. The work in this paper provides an important supplement to the atomic interaction modeling in nanomaterials.
Keywords:
uncertainty quantification; graphene; carbon atomic interactions; stochastic finite element model

Graphene is a two-dimensional nanomaterial with promising potential in a wide range of applications. The quantitative analysis methods for the extraordinary properties of graphene mainly include both the experimental and numerical aspects [1]. Compared with the experimental measurements, the numerical and theoretical methods are available and efficient supplements with merits in computational costs. At present, the main theoretical models and numerical methods for graphene research can be summarized into three categories: density functional theory [2,3] based on quantum mechanics, molecular dynamics [4] based on Newtonian mechanics, and finite element methods based on continuum mechanics. Density functional theory is the most commonly used method in condensed matter physics, computational chemistry, organic, inorganic, organometallic, and polymeric chemical systems [5,6,7]. However, when constructing an intrinsic model of the mechanical properties of graphene, the number of carbon atoms is still obviously limited by the performance of the computer. In addition, molecular dynamics simulations describe the state of motion of molecular systems well [8,9], but do not involve the evolution of electronic structures.
The finite element method has long-term development in terms of nonlinear problem solutions, parallel computing, dynamic motion modeling, etc. [10]. The high computational performance and fast convergence speed of the finite element method make it a competitive alternative to the numerical simulation of graphene. However, the variations and fluctuations of the material and geometrical properties are difficult to quantify and analyze, especially the uncertainty of the carbon atomic interactions [11]. Moreover, simplifying the graphene lattice to the periodic hexagon beams or truss elements neglects the identification of carbon atoms and carbon covalent bonds. It is necessary to introduce two different geometrical configuration components. In order to propagate the uncertainty of carbon atomic interactions in graphene, an advanced finite element model containing carbon atoms and covalent bonds is created and combined with the Monte Carlo stochastic sampling process.
In this paper, the stochastic finite element model (SFEM) is proposed for resonant frequency computation and uncertainty propagation. Both the carbon atoms and the carbon covalent bonds are taken into consideration. The method descriptions, including geometrical configuration, material parameters, and computational method, are presented in Section 2. Based on the database of the SFEM, the statistical results of the resonant frequency of graphene are recorded and compared with the reported literature. The correlation coefficients of geometrical and material parameters are computed by the Pearson and Spearman correlation methods. In addition, the vibration modes of graphene are also presented to observe and compare the displacements. Finally, a brief conclusion is summarized in the last section.

According to the experimental measurements and observations, the periodic honeycomb lattice of graphene is presented in Figure 1a. In general, carbon covalent bonds are simplified into trusses and beams to depict the characteristic microstructure in Figure 1b. However, the uncertainty of the carbon atomic interactions in the conventional numerical models is not taken into consideration. On the one hand, the variations and fluctuations in the geometrical and material parameters are not quantified or analyzed. On the other hand, when the atomic interaction of carbon atoms in graphene is simplified as a truss or beam element, the carbon atoms themselves disappear and are replaced by shared nodes or points. The exact role of carbon atoms and atomic interactions are neglected without a precise description. Considering the atomic interactions in graphene, this paper introduces an advanced finite plane element model, as shown in Figure 1c.
The assumptions and characteristics of the advanced finite plane element model of graphene are as follows.

The plane element used in the finite element model of graphene is a two-dimensional 8-node quadrilateral element, as shown in Figure 4. The finite element model of graphene is meshed by the 8-node quadrilateral elements. The material parameters of carbon atoms and the covalent bonds are distributed in certain components, and the connecting lines in the different components share the common nodes.
The shape functions of the two-dimensional 8-node quadrilateral element in the finite plane element model are expressed as, where u represents the displacement. The fundamental equations are derived from the element formulations and based on the principle of virtual work [12,13], where σij is the Cauchy stress component, is the deformation tensor, and and represent the component of body force and surface traction, respectively. V and s are the volumes of the deformed body and the surface of the deformed body on which tractions are prescribed, respectively.
The internal virtual work W can be indicated by:
Element formulations are obtained by differentiating this virtual work expression. In derivation, only linear differential terms are kept, and all higher-order terms are ignored, so that finally a linear set of equations can be obtained. In addition, the material constitutive law is used to create the relationship between stress increment and strain increment. where is the Jaumann rate of Cauchy stress, is the spin tensor, and is the time rate of Cauchy stress.
Therefore, the Cauchy stress rate is:
According to the constitutive law, the stress change due to straining can be expressed as: where is material constitutive tensor, and the rate of deformation tensor is computed as, where vi is the velocity and xi is the coordinates.
The Cauchy stress rate can be written as:
The hydrostatic pressure or volume change rate is interpolated on the element level and solved on the global level independently in the same way as displacement. The final stiffness matrix has the format of: where is displacement increment, is hydrostatic pressure increment.
The competitive merits of the finite element model used for the numerical investigation of graphene are the economics of computational cost and feasibility of computation of a massive number of atoms. The resonant frequency computation by the finite plane element model based on Monte Carlo stochastic simulation is programmed in the following flowchart.
As shown in Figure 5, the green boxes represent the Monte Carlo stochastic sampling procedure of the geometrical and material parameters. The geometrical configuration is defined above. The different values of material parameters of carbon atoms and carbon covalent bonds are distributed according to the specific interval ranges. The Monte Carlo simulation is performed to provide the unified distributed stochastic samples for the corresponding parameters. The characteristic lattice of graphene is meshed by the two-dimensional 8-node quadrilateral element. The finite element computation is performed under the ANSYS Parameter design language. The result accuracy and convergence are verified by the comparison with the reported literature [14,15,16,17,18,19,20,21,22,23]. The program loop will continue to execute until a sufficient number of Monte Carlo stochastic samples is reached.

The proposed stochastic finite plane element model of graphene is an effective alternative to the currently available approaches with competitive competencies in terms of computational performances and result consistency. In short, the following key points can be concluded based on the results.

(1)
The commonly shared nodes in carbon atoms and carbon covalent bonds in the two-dimensional 8-node quadrilateral element keep the geometrical connection and mechanical compatibility well.
(2)
The interval ranges of resonant frequencies computed by the finite plane element model completely include the results in the reported literature.
(3)
The correlation coefficients computed by the Pearson and Spearman methods have substantial agreements with small discrepancies in the geometrical and material parameters.
(4)
The length and the width of the carbon covalent bonds in the finite plane element model of graphene are the essential factors that impact the resonant frequencies.
(5)
The proposed finite element model not only has merits in terms of computational expense and feasibility in the massive stochastic sampling process but also is flexible in presenting the precise vibration modes of graphene with consideration of both carbon atoms and covalent bonds. 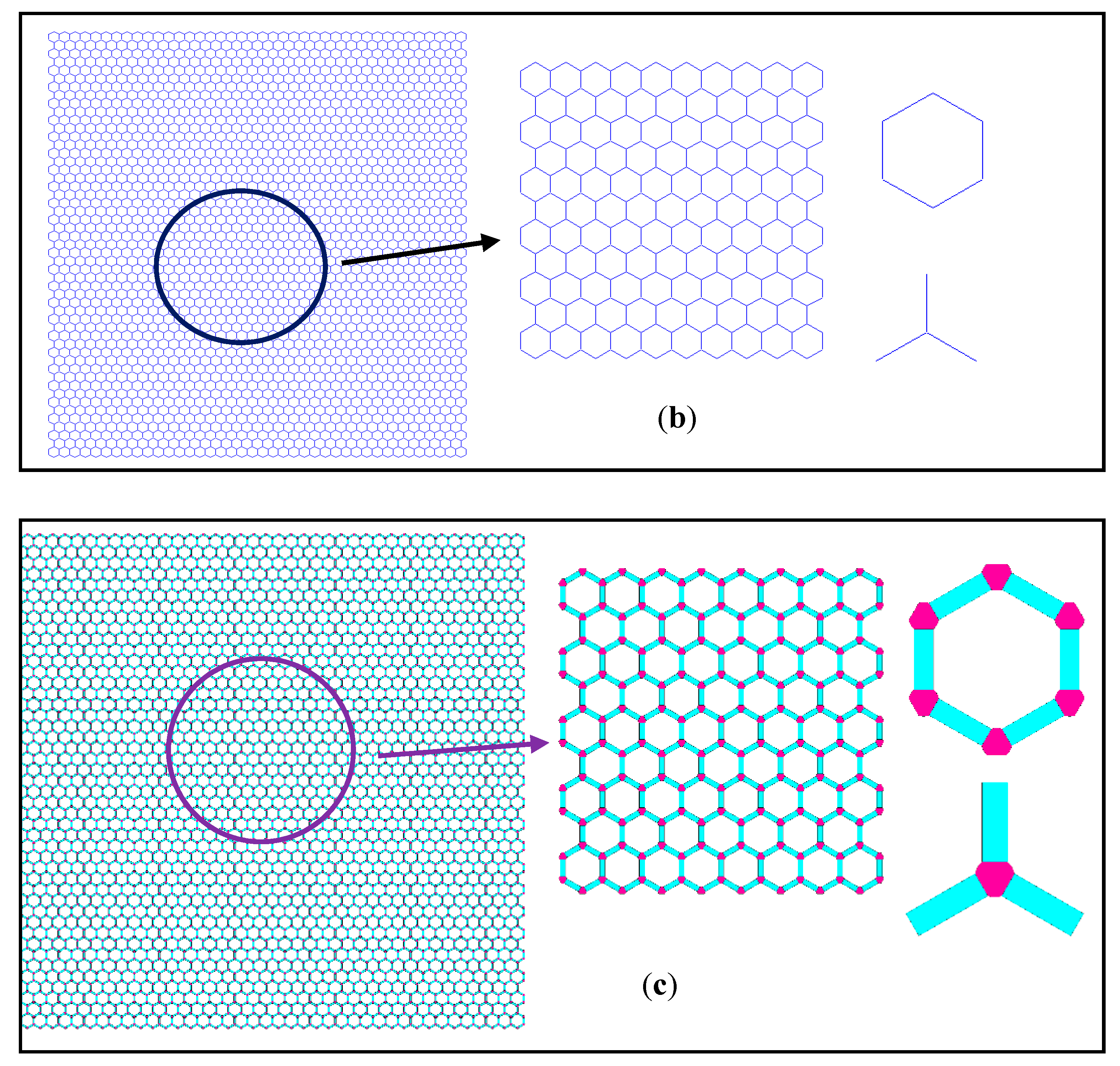 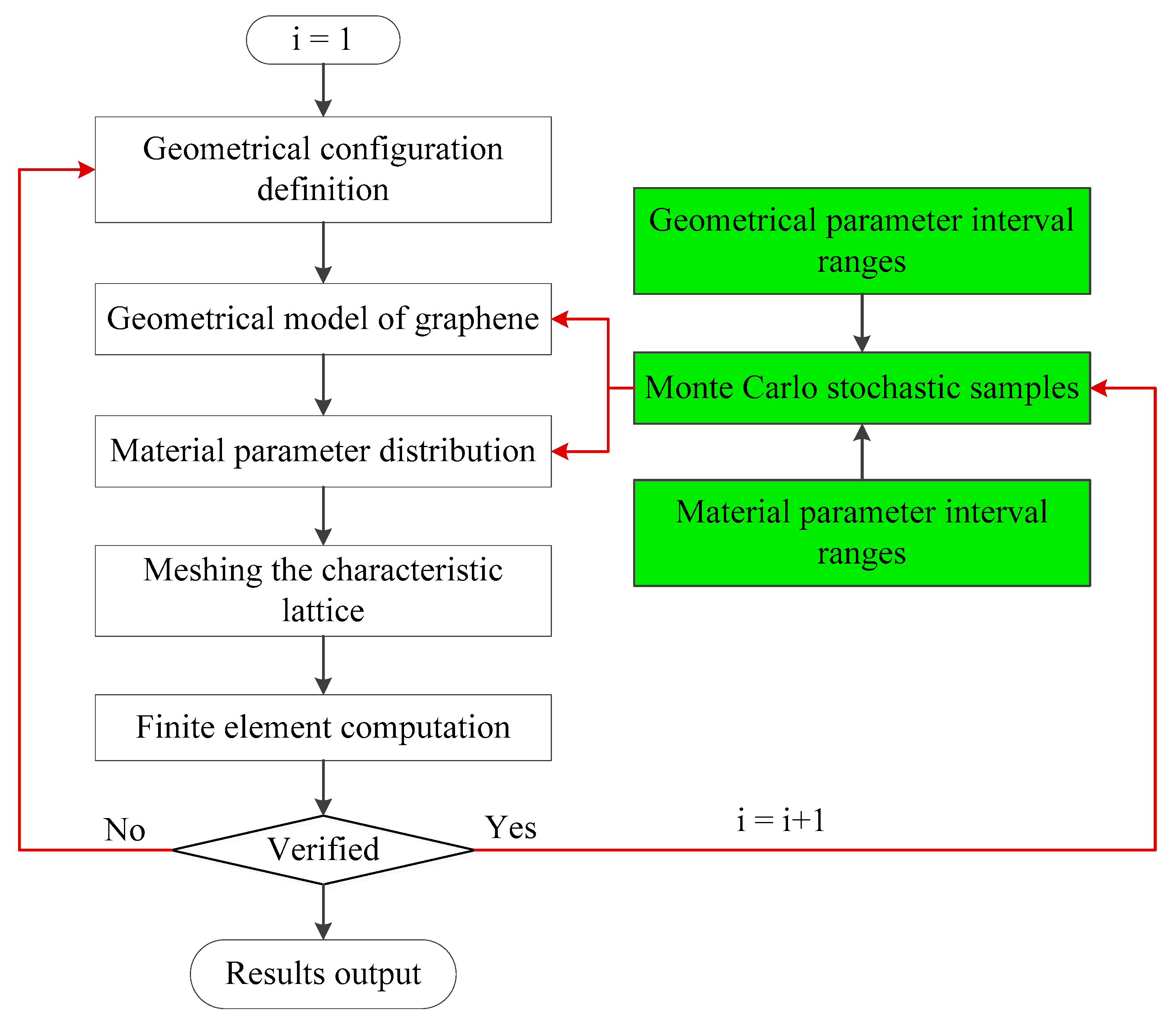 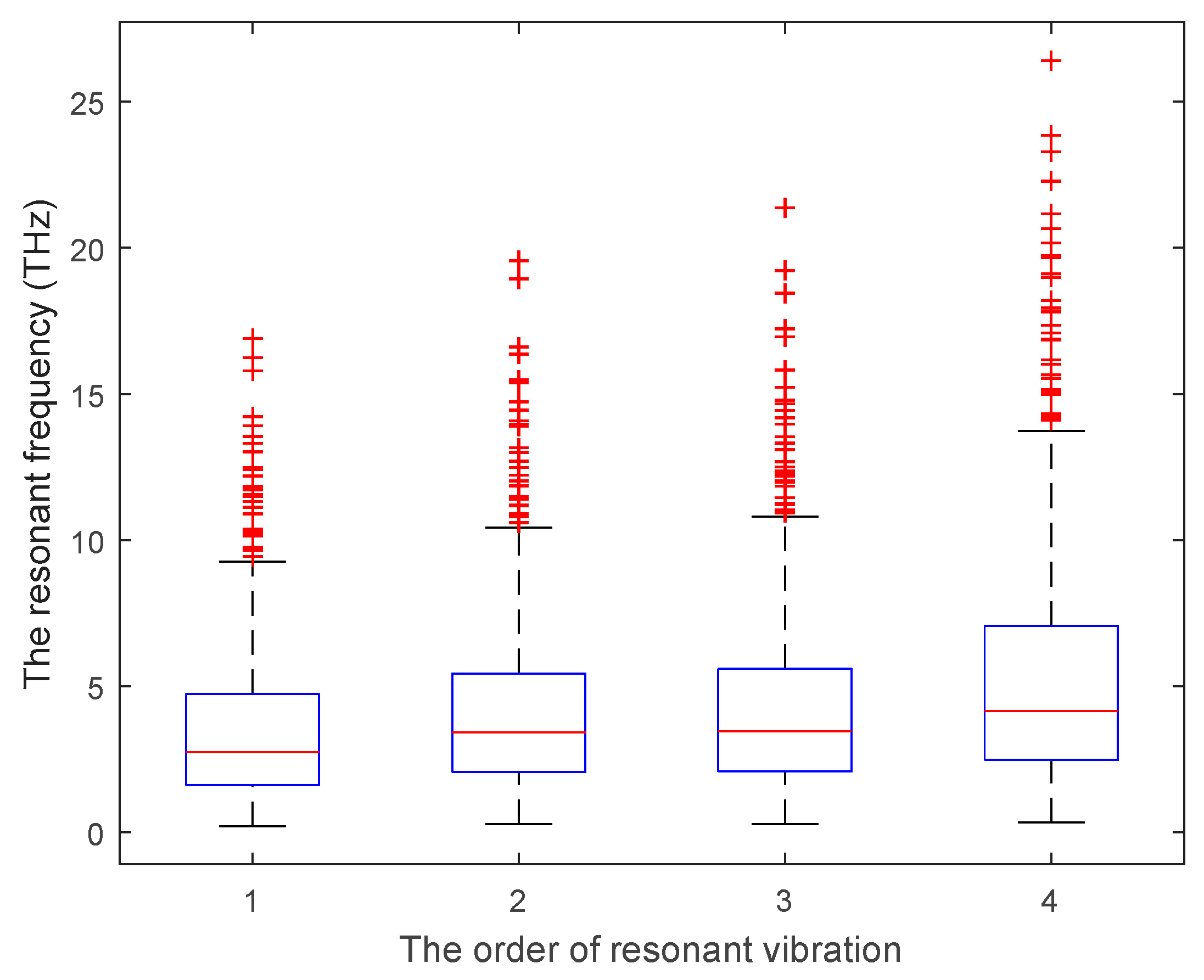 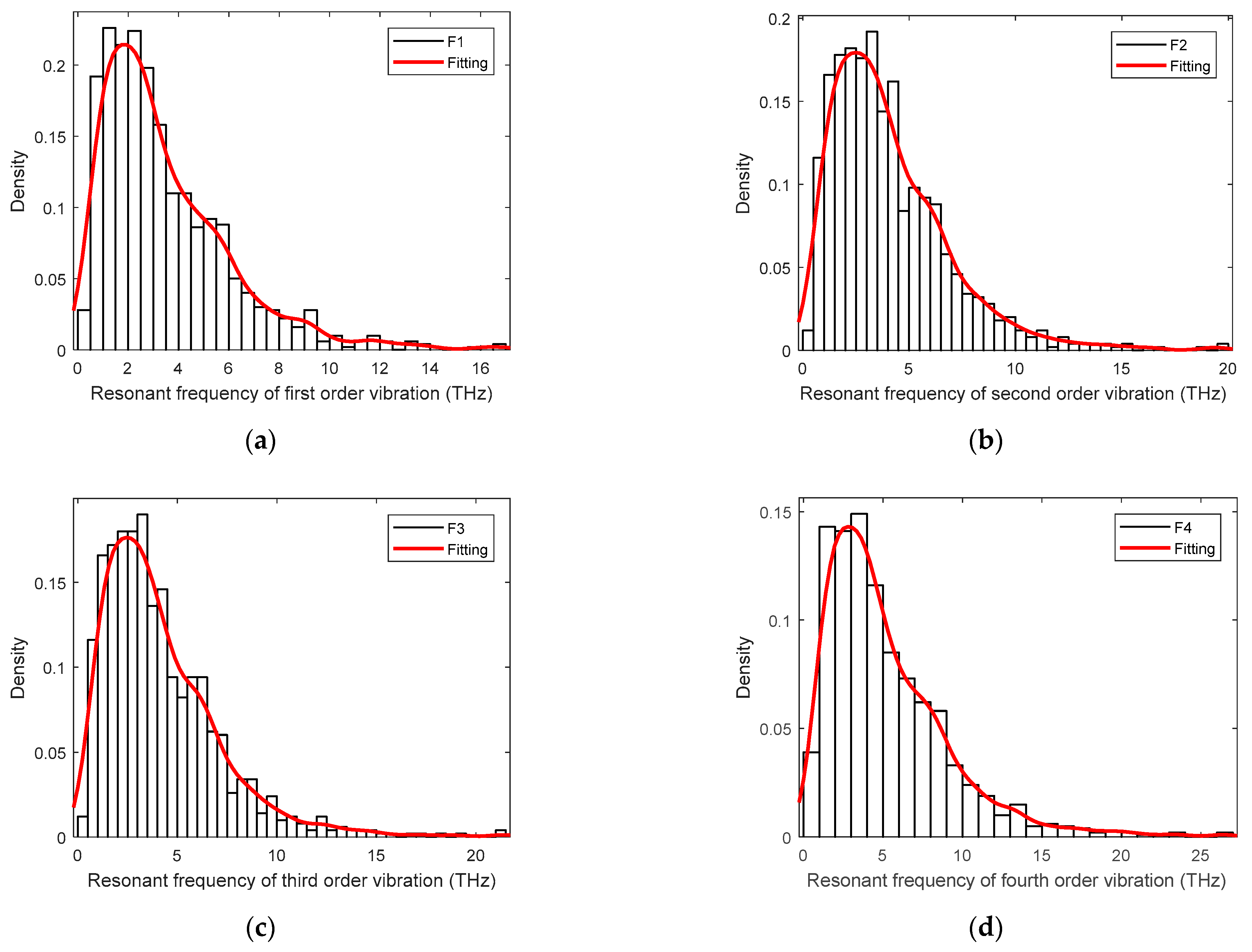 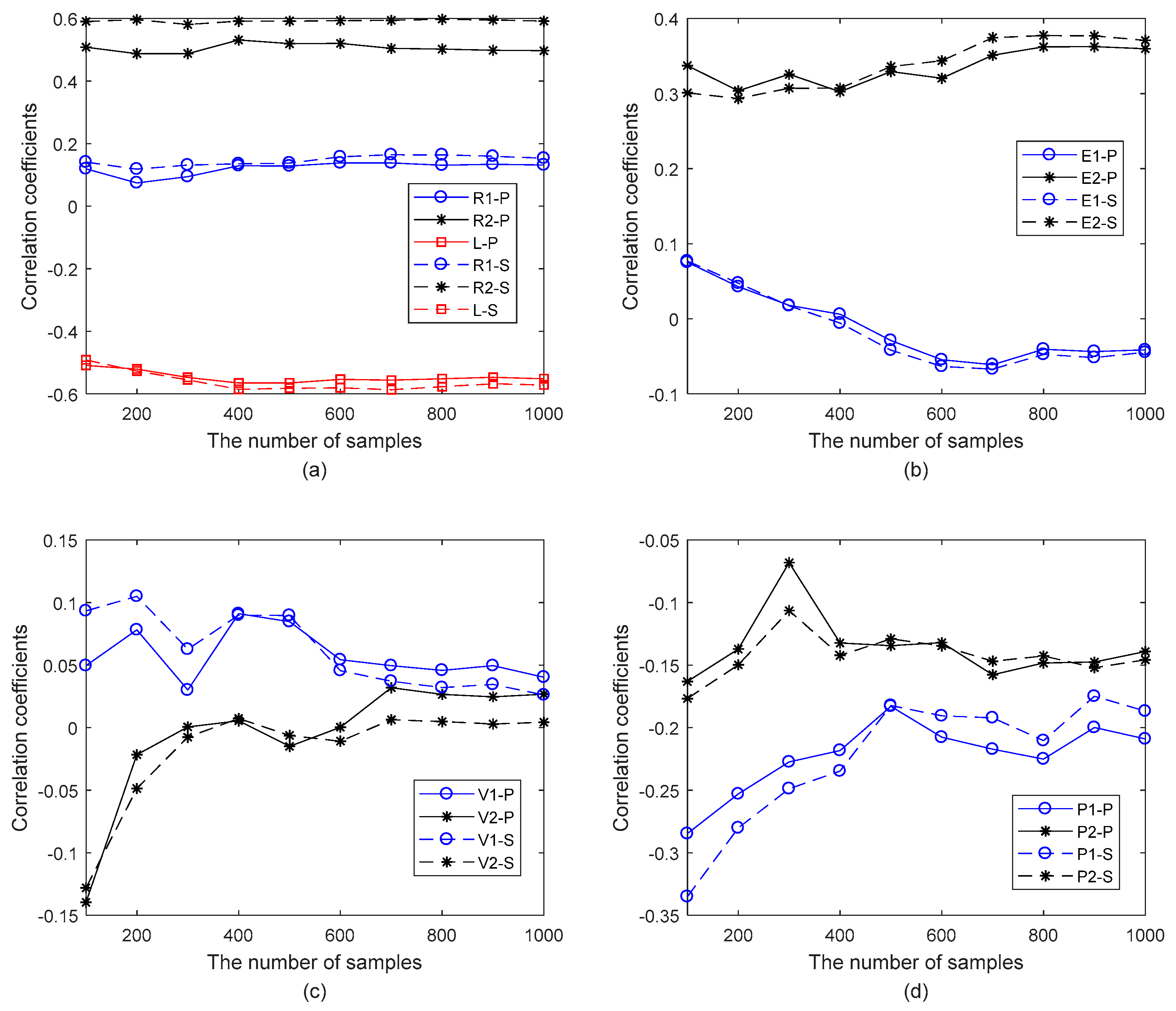