Cobalt (Co) doped zinc oxide (ZnO) microcrystals (MCs) are prepared by using the hydrothermal method from the precursor’s mixture of zinc chloride (ZnCl2), cobalt-II chloride hexahydrate (CoCl2·6H2O), and potassium hydroxide (KOH). The smooth round cylindrical morphologies of the synthesized microcrystals of Co-doped ZnO show an increase in absorption with the cobalt doping. The antibacterial activity of the as-obtained Co-doped ZnO-MCs was tested against the bacterial strains of gram-negative (Escherichia coli, Klebsiella pneumonia) and gram-positive bacteria (Staphylococcus aureus, Streptococcus pyogenes) via the agar well diffusion method. The zones of inhibition (ZOI) for Co-doped ZnO-MCs against E. coli and K. pneumoniae were found to be 17 and 19 mm, and 15 and 16 mm against S. Aureus and S. pyogenes, respectively. The prepared Co-doped ZnO-MCs were thus established as a probable antibacterial agent against gram-negative bacterial strains.
Keywords: cobalt-doping; microcrystals; absorption; antibacterial; synthesis cobalt-doping; microcrystals; absorption; antibacterial; synthesis

The difference of dimensions seen between the atomic and molecular scale of basic science and the microstructural scale of engineering and fabrication is balanced by the characteristic function of nanoscale materials [1]. Scientific research on crystalline nanomaterials has evolved exponentially at various levels over the last few decades. Several visualized application possibilities for such novel materials encourage intensive investigations. Semiconductors of the group (II–VI) are commonly studied because of their novel size-dependent electrical, optical, and optoelectronic properties.
Zinc oxide (ZnO) is among the most promising semiconductor materials from many perspectives [2,3,4]. It is an eco-friendly, thermally stable, biocompatible, versatile material with the potential to experience photocatalysis in a neutral, basic, and acidic medium. Such attractive properties, easy method of synthesis, and sophisticated growth develop ZnO-based devices in photonics, electronics, sensing, and acoustics [5,6]. This material is promising for optoelectronic devices of short wavelength [7,8], due to very high exciton binding energy (60 MeV), high photosensitivity, high electron mobility, inexpensive route of synthesis with diverse morphologies, flexibility in chemical functionality, biocompatibility, high transparency, and wide direct band gap (Eg = 3.37 eV) at room temperature [8]. Due to the huge electronegative value difference between O2− (3.44) and Zn2+ (1.65), the bonding in ZnO is ionic. Even so, the alternating layers populated by Zn2+ and O2− atoms form a crystal structure in which Zn2+ (cation) is coordinated tetrahedrally with four O2− (anions). The non-centrosymmetric structure that results from this coordination (tetrahedral) produces pyroelectric and piezoelectric properties of ZnO [9]. The effective way of getting unique properties in ZnO is the introduction of impurities into the ZnO host. In the past decades, several research groups have done interesting research to work widely on the unique arrangement of transition metal (TM) ion-doped ZnO nanoparticles with magnetic and optical properties [10,11]. The TM oxide-doped ZnO holds place in various applications including sensors [12], solar cell [13], optoelectronics [14], spintronics [15], and piezoelectric devices [16]. The analysis of the variations in the properties arising due to doping of different transition metals such as Cu, Ni, Co, Mn, Cr, and Fe to ZnO has always been the matter of controversial studies [17,18,19,20,21,22,23,24,25].
Cobalt has its significance among the various TM ions due to its comparable ionic radius (0.74 Å) to that of ZnO (0.745 Å) [26]. It can change the morphology and properties of ZnO nanostructures. It has a strong magnetic moment compared to other transition metals [2]. Co-doped ZnO diluted magnetic semiconductor (DMS) may possess the ferromagnetic property at room temperature [27]. Similarly, Co-doped ZnO nanostructures are found to have more thermal stability in comparison to pure ZnO [28,29]. Co-doped ZnO structures have many potential applications in medical [30], electronics [31], photo-catalysis [32], solar cells [33], thermoelectric [34], 3D printing [35], light-emitting diodes [36], humidity sensors [37], and biosensors [38]. It can also be used as an antifungal and antibacterial agent [39]. Co-doping also makes ZnO more flexible for the above-mentioned applications compared with pure ZnO [40]. However, it is a well-known fact that structural, electrical, optical, luminescence, and magnetic properties of Co-doped ZnO are strongly dependent on the synthesis, doping, and processing techniques. Co is considered as one of the most effective elements to be doped in ZnO. In this regard, Lu et al. [41] hydrothermally prepare Co-doped ZnO nanorods to study their photocatalytic degradation. Kalpana et al. [42] prepare Co-doped ZnO by co-precipitation method and also study their photocatalytic degradation. Some other synthesis techniques have also been reported in the past, including polymeric sol-gel, polymeric precursor method, co-precipitation, auto combustion method, RF magnetron sputtering, mechanical synthesis, solvothermal synthesis, acrylamide polymerization synthesis, and thermal decomposition, to synthesize ZnO and Co-doped ZnO [43,44,45,46,47]. The impact on the band gap, in particular, its association with near band edge (NBE) emissions in Zn1−xCoxO is still unclear, as many literature studies have provided conflicting results [44]. The environmental exposure of Co is extremely high and location dependent, making it generally difficult to measure. Dietary consumption is thought to be the most common route of exposure for the general public. Cobalt is present in almost all nutrition, with the exception of vitamin B12 and other supplements. Background Co (blood) level is calculated using a normal dietary Co exposure; based on this, it is thought that it will not pose a threat to human health. Many questions about the dose-response characteristics of Co-related adverse health effects have been addressed by a newly developed biokinetic model, which shows that less than 300 µg/L blood Co concentrations are unlikely to cause clinically significant indications in healthy people. Furthermore, regular exposure at acceptable doses is unlikely to cause serious health problems [48,49,50].
Likewise, many researchers have previously investigated the bactericidal properties of ZnO nanostructures in B. subtilis, S. dysenteriae, V. cholerae, E. coli, S. aureus, and S. Typhi [50]. It has been found that the chemical interactions between membrane proteins and nanomaterials, as well as the creation of free radicals due to ZnO-NPs, might be the reason for extraordinary bactericidal properties of undoped and Co-doped ZnO-NPs. In comparison to previous work on Co-doped ZnO nanostructures [51], including nanoparticles [45,52] and nanorods [53], the current work is unique not only for the type of precursors and experimental procedures, but also for the size and cylindrical morphology of the as-obtained Co-doped ZnO, as shown in Table 1, and their effective use as a strong antibacterial agent against two (gram-positive and gram-negative) bacterial strains.

Highly crystalline ZnO cylindrical microcrystals with Co doping were synthesized hydrothermally by using zinc chloride (ZnCl2), cobalt-II chloride hexahydrate (CoCl2·6H2O), and potassium hydroxide (KOH) as precursors. At first, 1.6 g of ZnCl2 and 0.4 g of CoCl2·6H2O were mixed. Cobalt II chloride hexahydrate is equal to the 25% of the total weight of zinc chloride. This mixture was then dissolved in 40 mL of distilled water (DI). Subsequently, 0.8 g KOH aqueous solution was added dropwise to get a precipitate with a pale pink color. Consequently, at room temperature, the solution was stirred for 30 min then the homogenous mixture was poured in an autoclave (Teflon lined) and kept in an oven for 23 h at 120 °C. The as-obtained precipitate was first washed numerous times with distilled water (DI) and then with ethanol and finally dried at 90 °C, for 30 min. The schematic representation of the whole process is demonstrated in Figure 1.

To assess the efficiency (antibacterial) of Co-doped ZnO-MCs in Mueller–Hinton broth media (from their pure cultures), all bacterial strains were sub-cultured and incubated overnight. Fresh cultures were used in the antibacterial assay by moving stock suspensions mounted on nutrient agar and incubated at 37 °C for a complete day. The bacterial culture turbidity was measured by using the 0.5 McFarland standard [58], which equals 1.5 × 108 (CFU/mL) bacteria. A sterile glass spreader was used to spread each species on a Mueller–Hinton Petri dish. Wells (4 mm) were made by using a sterile polystyrene tip. Co-doped ZnO-MCs were prepared in 2% hydrochloric acid (HCL) with different concentrations (0.1, 0.5, 1 mg/mL). Forty microliters (40 µL) taken from the prepared stock solution was added to each well. Plates were placed entirely for incubation at 37 °C in an incubator overnight. In a UV transilluminator, photoactivation of Co-doped ZnO-MCs suspensions was carried out by exposure at 254 nm with UV light, for 30 min. The inhibition zone was measured around each well in millimeters by a caliper. Clindamycin phosphate, as a reference antibiotic (standard), was used at a concentration of 20 µg/mL. Every experiment was performed three times and mean value was calculated.

A simple and cost-effective hydrothermal technique is used to synthesize the unique cylindrical Co-doped ZnO-MCs. XRD, XPS, and Raman characterizations effectively confirmed the incorporation of Co+2 ions into the Zn+2 ions lattice site. UV-vis results showed that, at a higher dopant concentration (0.4 g/0.025 M), the rate of absorption increases. The increase in absorption in the visible region depends on the increase in the concentration of defects causing deep levels in the ZnO band gap, and this broad absorption is due to d–d transition of Co2+ ions. Co-doped ZnO-MCs can efficiently work against gram-negative and gram-positive bacteria. The results showed that Co-doped ZnO-MCs have better antibacterial activity against gram-negative bacteria, compared with gram-positive bacteria. All the tested bacteria were inhibited by Co-doped ZnO-MCs and the inhibitory effect was dose-dependently increased. Gram-negative microbes were shown to be more sensitive to Co-doped ZnO-MCs, as compared with gram-positive microbes.

The authors extend their appreciation to the International Scientific Partnership Program ISPP at King Saud University for funding this research through ISPP-20154(1).

All the data is available within the manuscript. 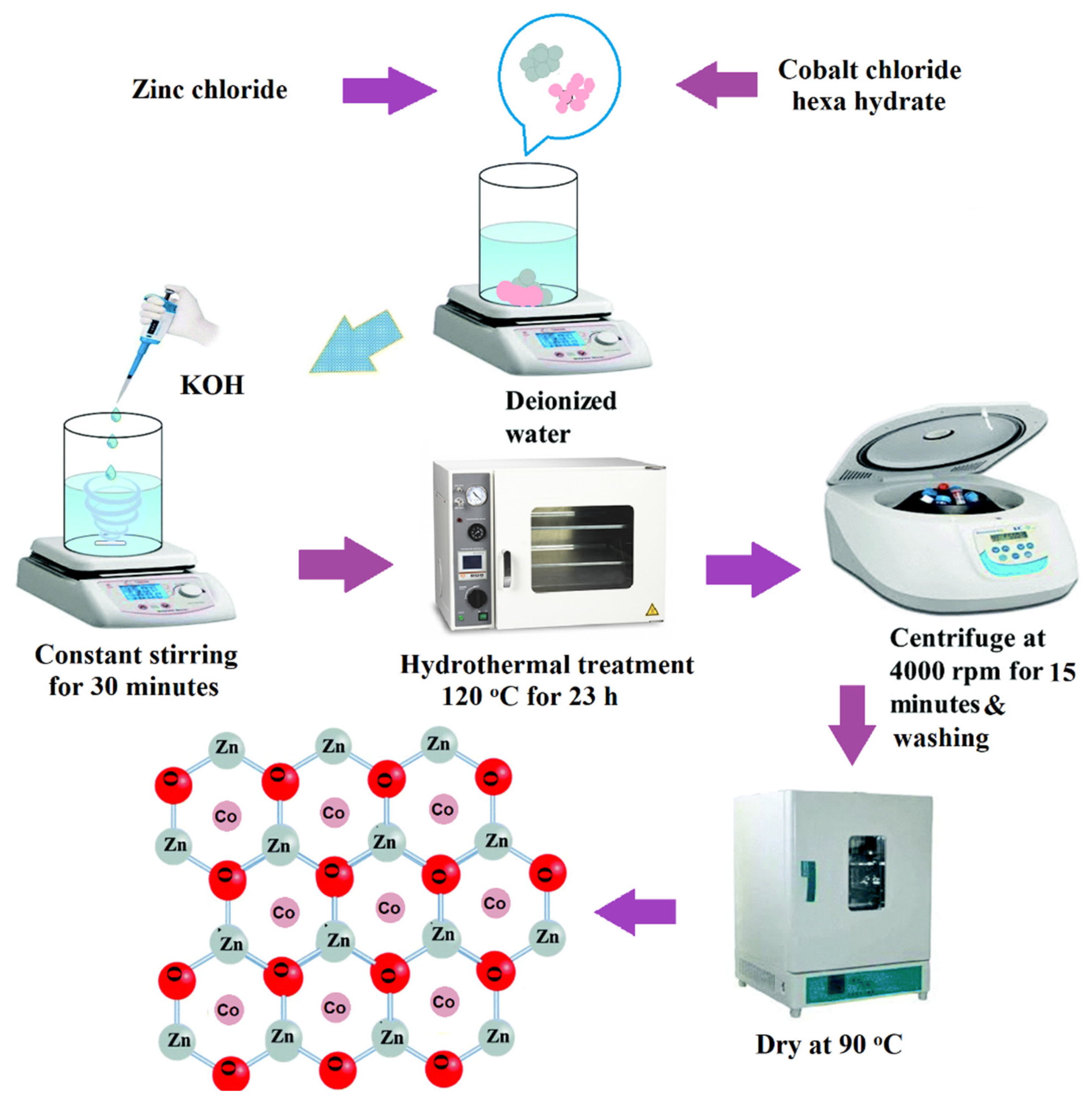 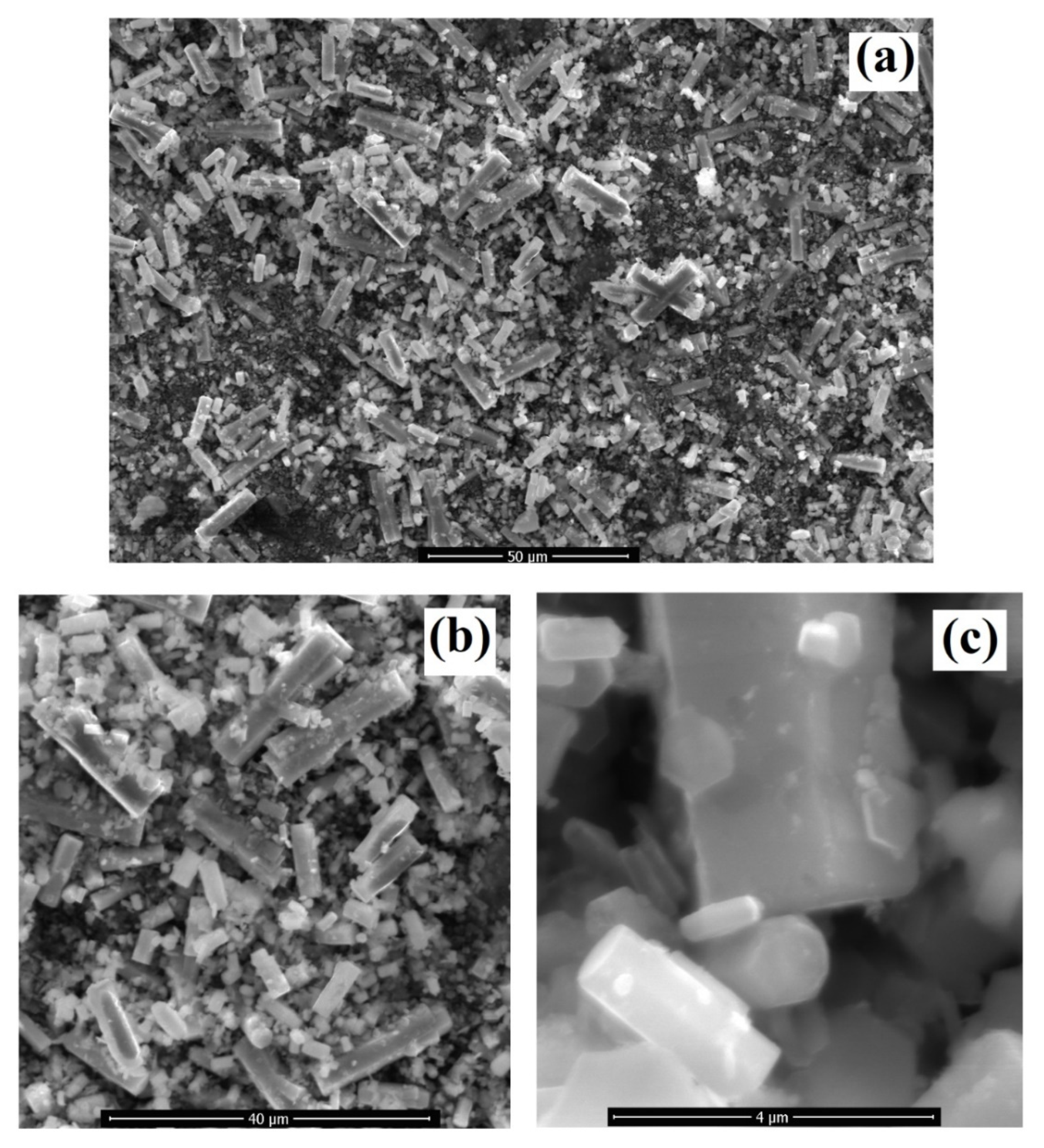 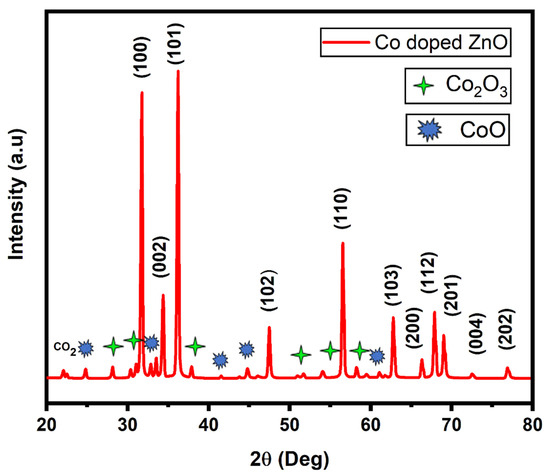 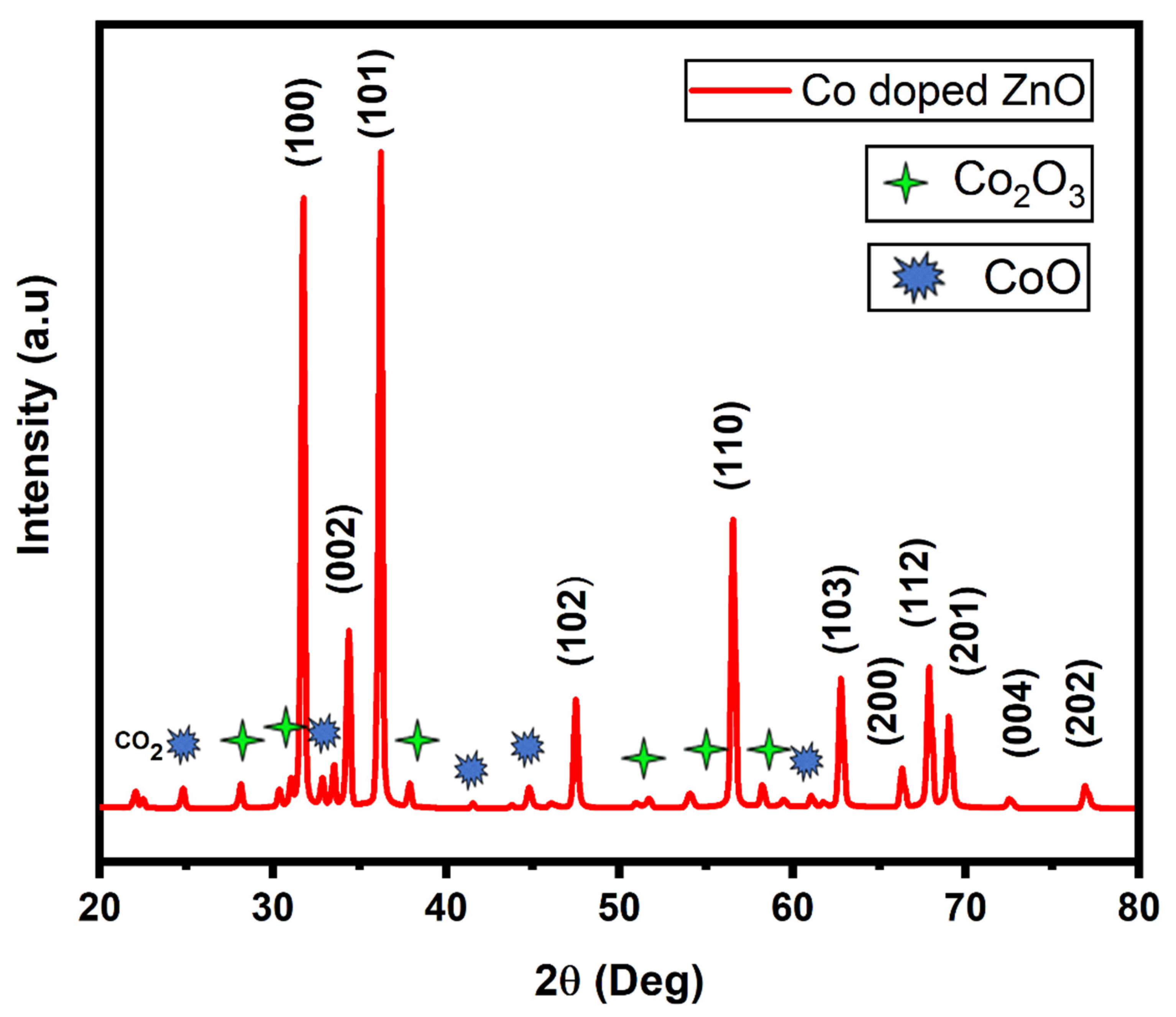 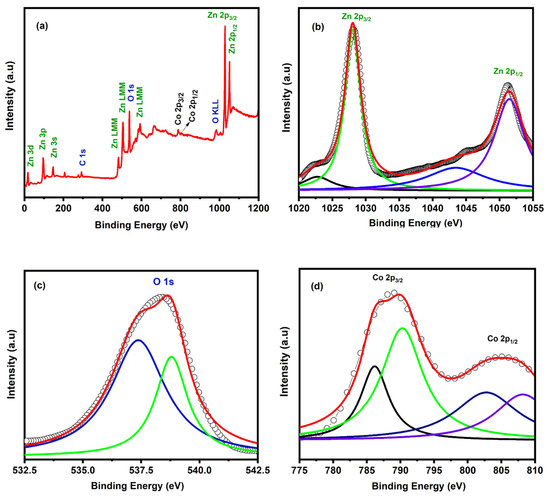 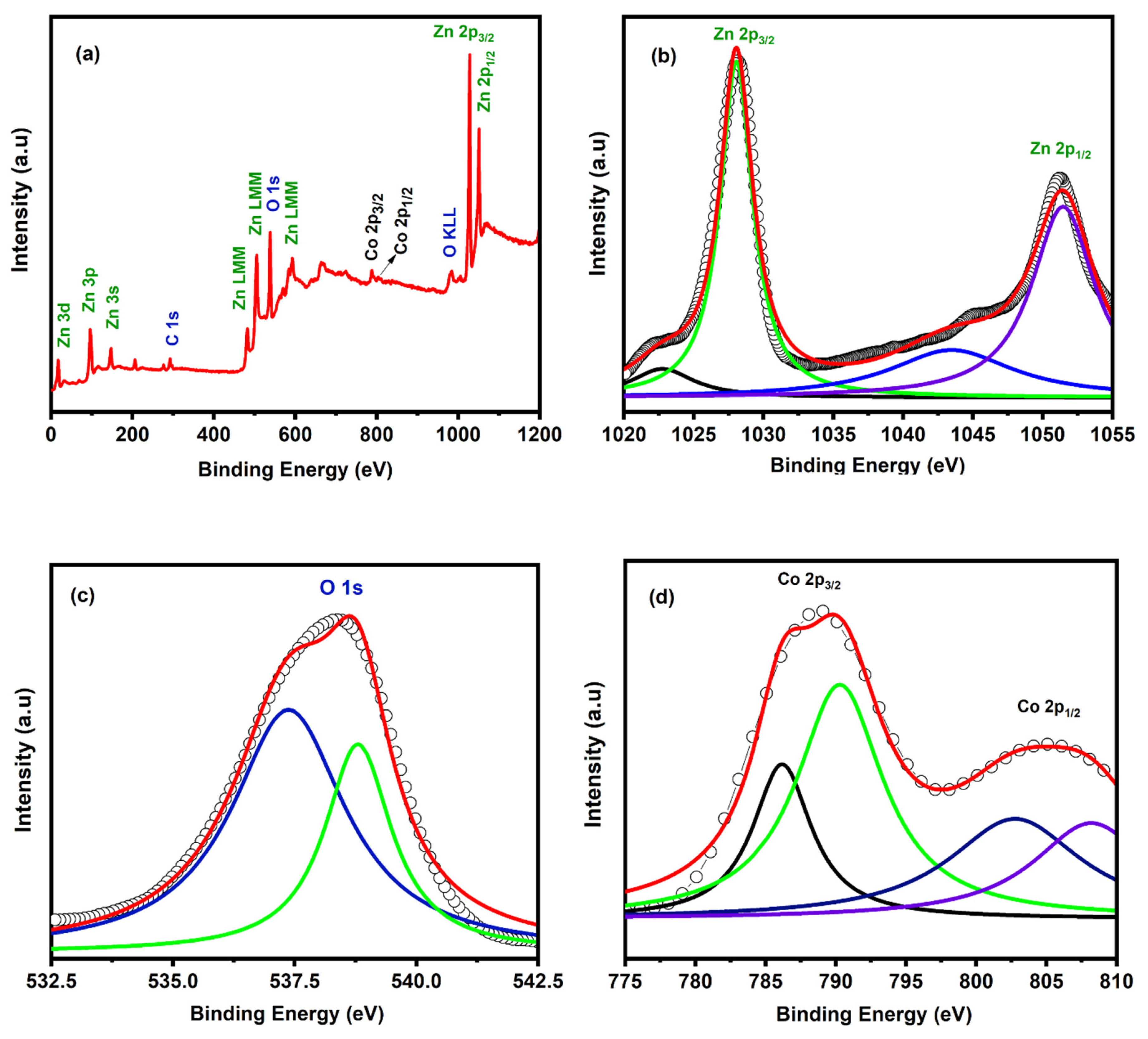 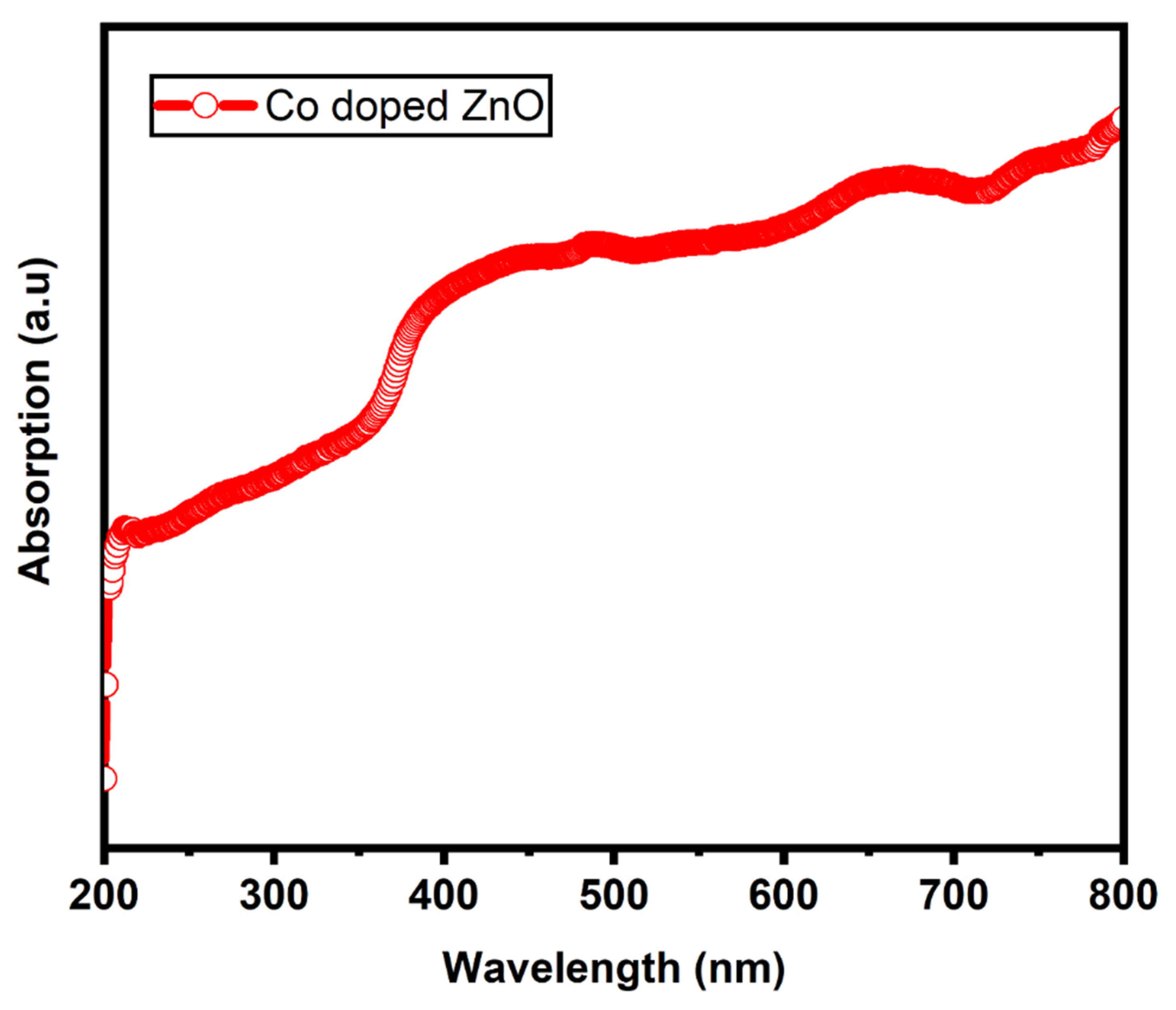