NiO Pseudocapacitance and Optical Properties: Does The Shape Win?

In the present paper, we investigate the effects of alkali and operational temperature on NiO capacitive and optical properties. The NiO samples were prepared by a straightforward, surfactant-free hydrothermal synthesis, employing Ni(NO3)2 and either urea or moderately sterically hindered triethylamine (TEA). The syntheses were followed by calcinations at either 400 or 600 °C. NiO samples were characterized by XRD, scanning electron microscopy, and nitrogen adsorption isotherms. The optical properties were investigated by reflectance spectroscopy, and the pseudocapacitance was studied by cyclic voltammetry and galvanostatic charge charge-discharge measurements. We found that the synthesis with TEA yielded nanoflowers whereas the morphology of the synthesis with urea varied with the calcination temperature and resulted in nanoparticles or nanoslices at calcination temperatures of 400 and 600 °C, respectively. The NiO samples prepared at a lower temperature displayed a favorable combination of surface area and porosity that allowed for high performance with capacitances of 502 and 520 F g−1 at a current density of 1 A g−1 for nanoflowers and nanoparticles, respectively. The band gaps of all the samples were compatible with the estimated nanoparticle sizes. Finally, we used the synthesized NiO samples for the preparation of screen-printed electrodes (SPEs) modified by drop-casting and probed them against a [Fe(CN)6]3−/4− probe. View Full-Text
Keywords: NiO; super-capacitance; optical properties; hydrothermal synthesis; porosity NiO; super-capacitance; optical properties; hydrothermal synthesis; porosity
►▼ Show Figures 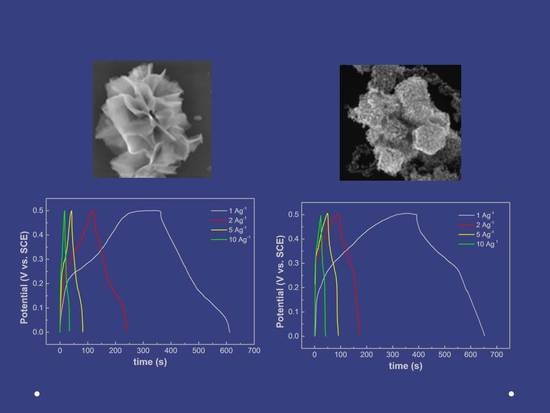