Selection and Optimization of a K0.5Na0.5NbO3-Based Material for Environmentally-Friendly Magnetoelectric Composites

The magnetoelectric (ME) response in a trilayer structure consisting of magnetostrictive Fe77.5B15Si17.5 amorphous microwires between two piezoelectric PZT (PbZr0.53Ti0.47O3) layers was investigated. Soft magnetic properties of wires make it possible to operate under weak bias magnetic fields below 400 A/m. Enhanced ME voltage coefficients were found when the microwires were excited by ac magnetic field of a frequency of 50–60 kHz, which corresponded to the frequency of electromechanical resonance. The as-prepared microwires were in a glass coat creating a large thermoelastic stress and forming a uniaxial magnetic anisotropy. The effect of glass-coat removal and wire annealing on ME coupling was investigated. The glass coat not only affects the wire magnetic structure but also prevents the interfacial bonding between the electric and magnetic subsystems. However, after its removal, the ME coefficient increased slightly less than 10%. Refining the micromagnetic structure and increasing the magnetostriction by stress release during wire annealing (before or after glass removal) strongly increases the ME response up to 100 mV/(cm × Oe) and reduces the characteristic DC magnetic field down to 240 A/m. Although the achieved ME coefficient is smaller than reported values for multilayered films with layers of PZT and soft magnetic alloys as Metglass, the proposed system is promising considering a small volume proportion of microwires. View Full-Text
Keywords: multiferroics; magnetoelectric composite; magnetoelectric effect; amorphous ferromagnetic microwires multiferroics; magnetoelectric composite; magnetoelectric effect; amorphous ferromagnetic microwires
►▼ Show Figures 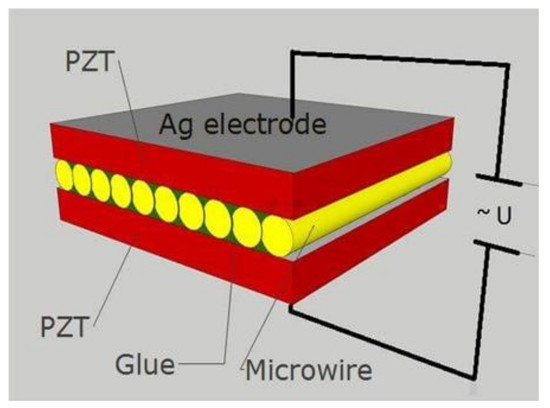