The search for catalysts with features that can improve coke resistance and decrease byproduct formation is a current goal in H2 production from renewable sources. In this work, the effect of the presence of Ni nanoparticles over Co/La-Ce oxides on the ethanol decomposition reaction was studied. Catalysts were synthetized using as precursor a La0.8Ce0.2NixCo1-xO3 perovskite-type material to ensure a low segregation of phases and a high dispersion of metals. After reduction at 873 K, the perovskite structure was destroyed, and metal Co-Ni particles were supported over a lanthanum-cerium oxide. The materials were characterized by different techniques before and after reaction. Solids exhibited metal particle sizes between 5 and 15 nm demonstrating the advantages of the preparation method to obtain Ni-Co alloys. Although the results of adsorption of ethanol followed by diffuse reflectance infrared fourier transformed spectroscopy (DRIFTS) showed acetate species strongly adsorbed on the catalyst’s surface, the material (Ni0.7Co0.3/La0.8Ce0.2) with the lowest particle size was the most stable system leading to the lowest amount of carbon deposits during ethanol decomposition. This catalyst showed the better performance, with a higher ethanol conversion (98.4%) and hydrogen selectivity (75%). All catalysts exhibited carbonaceous deposits, which were an ordered and disordered carbon phase mixture. View Full-Text
Keywords: bimetallic catalysts; Ni-Co; ethanol decomposition; perovskite precursor; supports of La-Ce oxides bimetallic catalysts; Ni-Co; ethanol decomposition; perovskite precursor; supports of La-Ce oxides
►▼ Show Figures 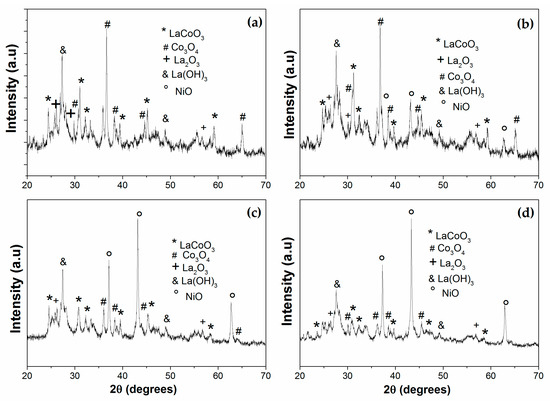